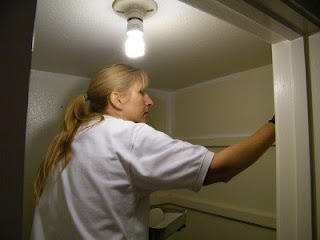 We got up on Saturday morning with plans to clean house and do some errands. Bruce went to work in the garage checking under the hood of his new toy. I got out the vacuum cleaner and started cleaning up downstairs. I got as far as the cat closet and decided that it needed painting. So... out came all of the stuff. I cleaned the walls and took the shelves out. I scrounged around and found some left over primer but had to go to the paint store for the wall color. The old color was basic nicotine stain. It was a one-person job painting in the cramped closet. 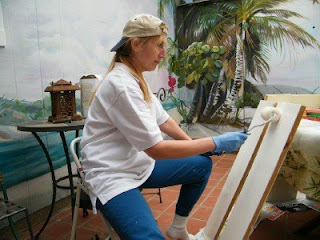 I got the a primer coat on the walls and moved on to the atrium where I had the shelves ready to go. I had used the "liquid sandpaper" to prepare the oil painted wood for a new coat. I rolled on the paint and then used a paintbrush to tip the finish. Don't ever buy a cheap roller... they leave fuzz in the paint. But, it's only closet shelves so I didn't do anything about it. I'll never see them again anyway. 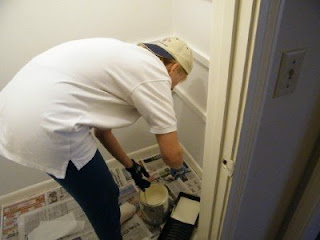 Next came the baseboards in the closet... also oil paint. This was the most tedious part of the whole project... keeping the baseboard and wall paint separate. I got one color and the oil on one side of the shelves before I was done for the day. I am using the same color as we have on the walls downstairs...wheat sheaf. It's actually not so far off of the nicotine color that was there, but it looks so much better already. 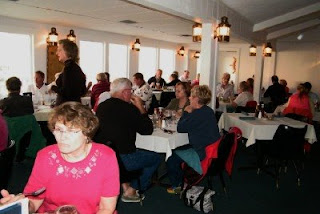 I finished up just in time to get ready to go to dinner with the BYC group. There was a cruise to the Crab N in Aransas Pass planned but we had not expected to bring Elan due over due to the ongoing varnish project. We joined the others driving over. We had never been there before and thought that the weather would keep the bunch at home, not so! There were probably over 40 people from our club there. There was only one couple that came in their boat. The winds were howling and it would not have been a great sail over. It was absolutely great food and we will go back again.