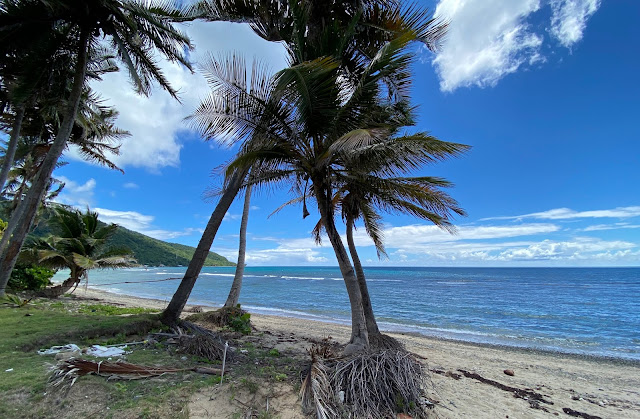 OPB used to mean Other People's Boats.  Now that we don't have one of our own, that's pretty much the best kind of boat to have!  But now, I've discovered another meaning for OPB... Other People's Beaches!

You might wonder why, with a beach in our own back yard, we would need to seek out other beaches at all... But, I have discovered this.  You can NEVER have too many beaches!

This morning, for no reason, we sprung out of bed and packed up for a return to one of the new spots we found on our rainy Monday expedition.  This little slice of Paradise is about 10 minutes from our house, and after today... it will be on our regular visitation route for sure! We parked the car and put on our sun protective gear... and headed for the sand!

I noticed a man sitting beneath the shade of a covered patio at the edge of the neighboring property.  He was singing very loudly, and jammin' in his chair... and as I passed him, I asked if it was OK to park here.  He told us that of course we could park there, and that we were welcome to enjoy the beautiful beach, and that everyone should be happy!!  Noted, and plan executed! 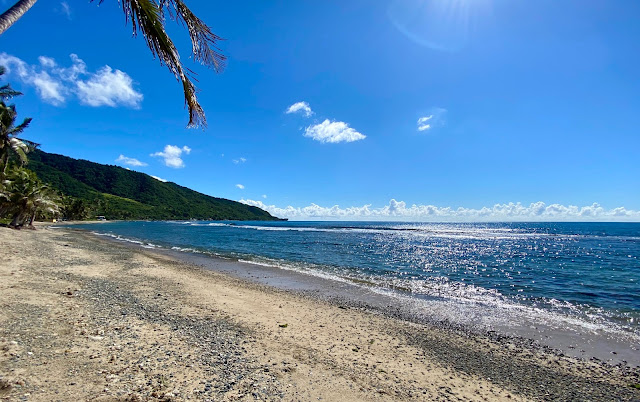 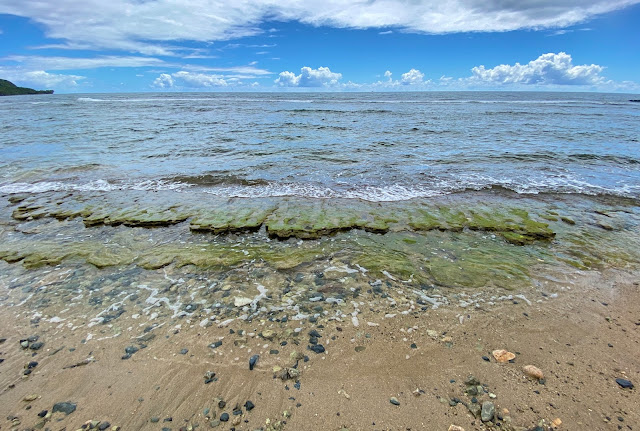 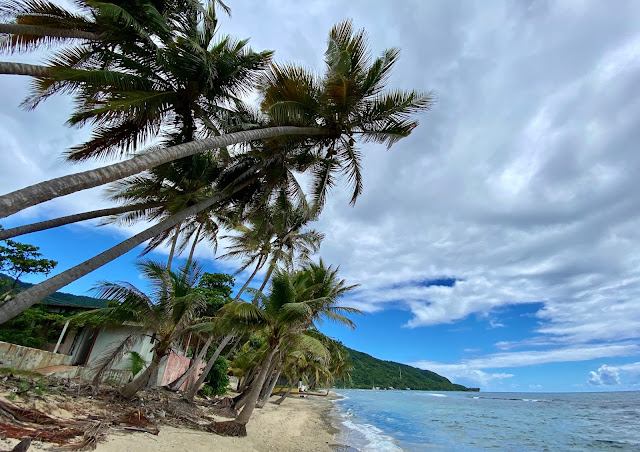 When we first discovered this place, we were at the end of our day, and we split up, with Bruce going west, and me walking east a short distance.  Today, we stuck together so that we could cover a larger area in our search for more sea glass!!  We walked slowly west until we were greeted by a very nice woman, Teresa, who joined us in our collecting for a bit.  Not only was she very welcoming and friendly, but she even showed us how to dig for sea glass pieces!!  We met her husband, and chit-chatted for a bit.

When we said our goodbyes, we turned back to walk the other direction, passing our access point, and continuing on, with our collection bags growing more heavy with every step.  While our forward progress was slow... the workout we got with each bend and reach for another treasure, must surely count for something! 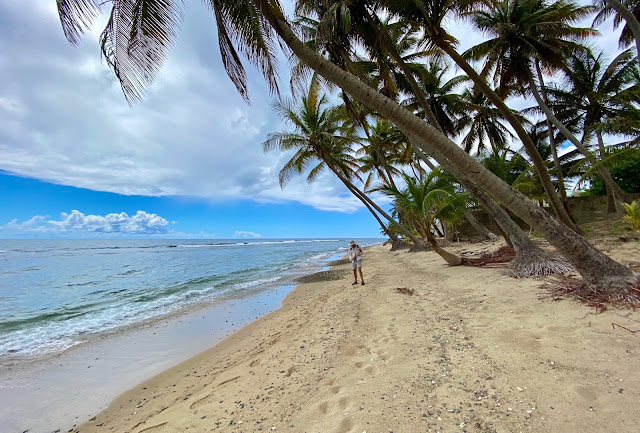 All along this beach, in each of the strips of high-water deposits, and in each of the rock piles distributed by the waves that made it past the protective reef, we found wonderful bunches of sea glass and tiles. Today's treasures included several rare blues, a couple of small reds (even more rare) and a lavender... I've only found one or two lavender before today.  But the most rare of all, is a large piece of Bonfire Glass!

We didn't make it to the end of the beach before we began to wilt.  It was warm, and we were really picking up a lot... my back began to protest and Bruce was happy to comply with my suggestion that we save the rest for next time!  We will let the beach rebuild her trove, and come back for more... soon! No need to be greedy! 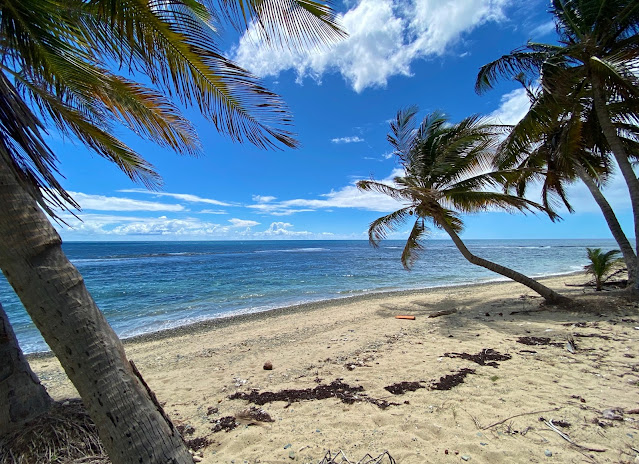 Back at the car, we stripped off our sunwear, and were just about to leave, when I went over to the fence to say goodbye to the nice man.  He came over and we began to talk.  That lasted another 20 minutes... and ended with exchange of phone numbers, an invitation to just come on in and enjoy his shaded patio, and even a promise of some plants for my yard!  Puerto Ricans are just the nicest folks on the planet! So now, whenever we get bored with our OWN beach... we have a new place to come and enjoy... Alexander's Beach! 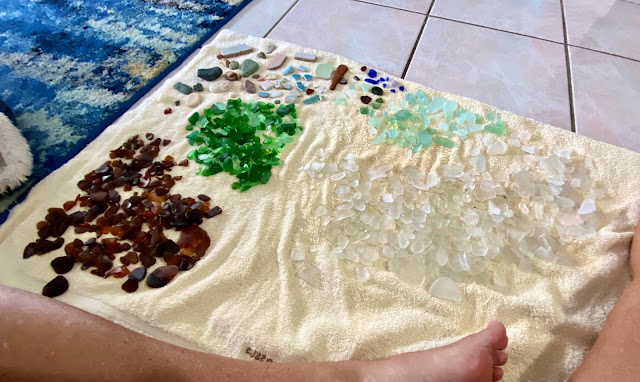 Places To Go & Beaches To See

It's been raining for days.  A slow-moving disturbance in the Caribbean Sea is slinging all kinds of thunder and rain across our island, and I'm just sick of it!  I've got places to go and beaches to see! I can't be sitting here in this condo with no salt air on my face!  So, ever the optimist, I convinced Bruce to go out for a little drive!

I've got SO many pins on my Google map that we have yet to explore.  Today, I picked a couple of obscure roads that may or may not have beach access.  With a steady drizzle blurring my vision, I drove us along the wet roads, careful to dodge any puddle that might be hiding a damaging pothole... Until we diverted from the main road and onto an adventure.

The first stop was designated as a "possible sea glass beach".  It was a very narrow road, almost more of a driveway in fact.  It took us down the front side of some very "modest" homes that are one of my marvels.  These shacks homes are practically one-room hovels, but they have a front row position on the actual Caribbean Sea.  Property like this could be worth millions if it was anywhere else.  We barely found room to turn around, with a pack of Satos sniffing curiously at our tires.  With the windshield wipers beating furiously, and a small river beginning to form just in front of us, I stared out at the crashing waves.

Bruce had that frightened look he sometimes gets when we're adventuring.  Today he actually voiced his objection "Sometimes when you take me to these places... I'm actually terrified." Well, there's no need to be terrified!  Although, if it weren't raining, I might insist on getting out and taking a look at that beach.  But today, I backed us out of there and got back on the main road, off to the next prospective new discovery!

It's all right here along this short stretch of eastern shoreline. We didn't have to go far before the obscure little road-that-doesn't-look-like-a-road-at-all jutted off shoreward.  This time, it took us to a less private, more general public type of dead end road.  But it's a Monday, and it's steadily raining, so we have the place to ourselves.  I convinced Bruce that we should at least get out and go take a look... and the rain even stopped for a few moments. Until it didn't.  Well crap!  Our beach walk is turning out to be a total bust!  But at least we found a place we could return to if when the rain ever passes!

So now what?  I kept consulting the weather radar, and it looked like we were heading right into the worst of the rain for a while.  But we decided to do it anyway.  We continued driving north, and visited Playa Lucia.  It was raining pretty hard, so we just took a spin around the parking lot and retreated.  But before we reached the main road to backtrack... we found a field of mushroom rings!  MUSHROOMS!  I love them almost as much as I do leaning palms.  I got out of the car, and in a light drizzle, I snapped about a hundred pictures! Sorry, this is where I store all of my photo memories... so scroll on! 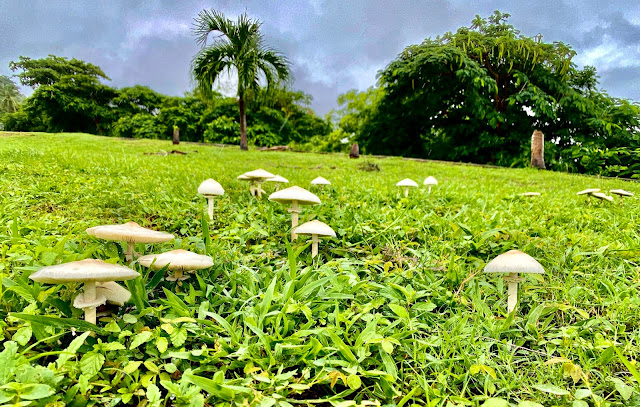 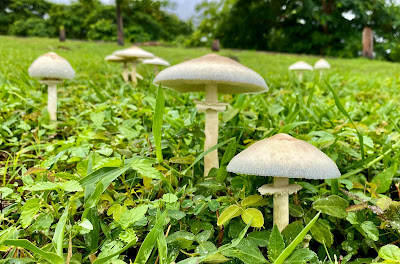 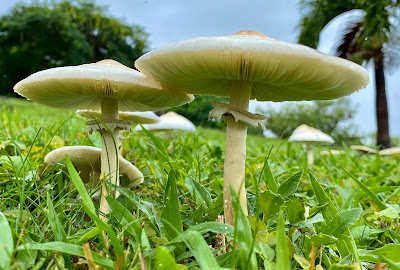 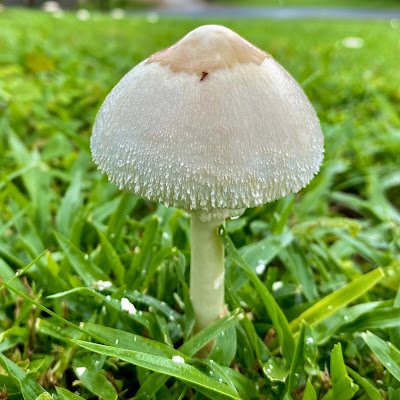 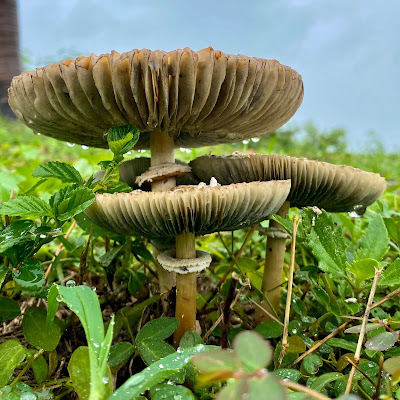 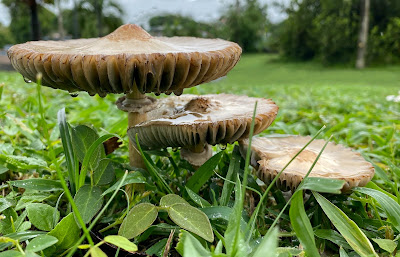 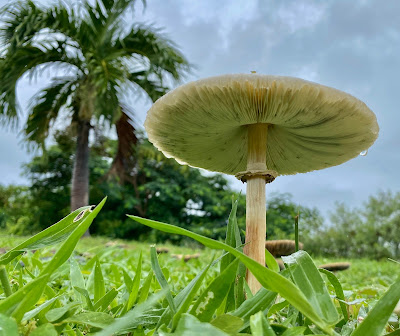 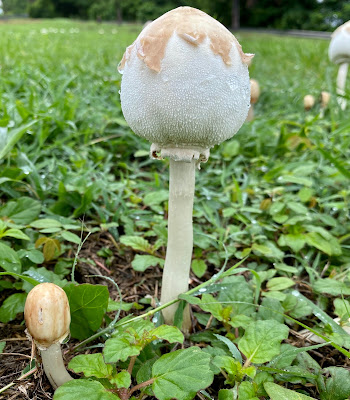 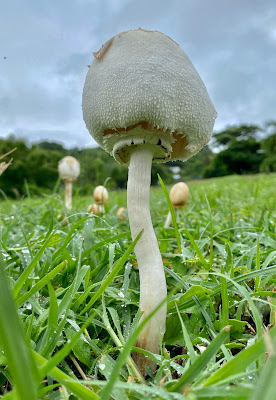 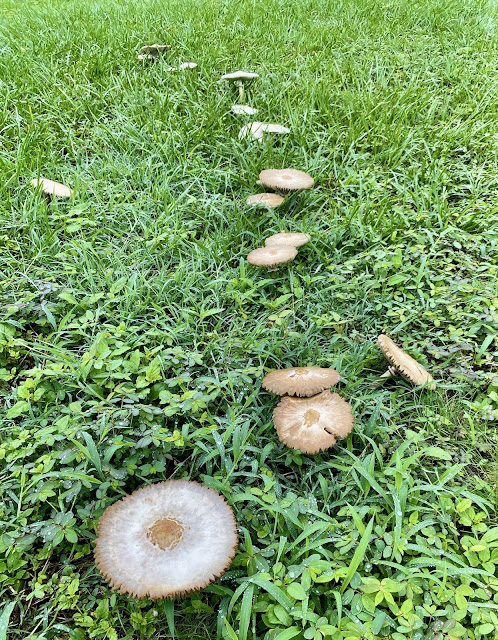 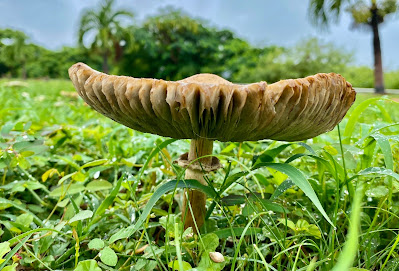 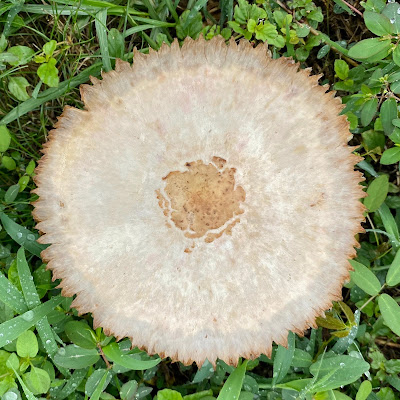 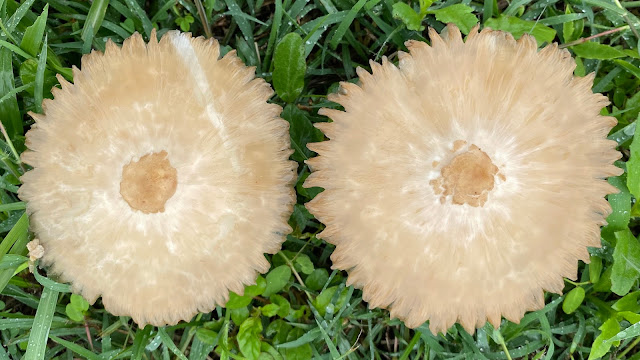 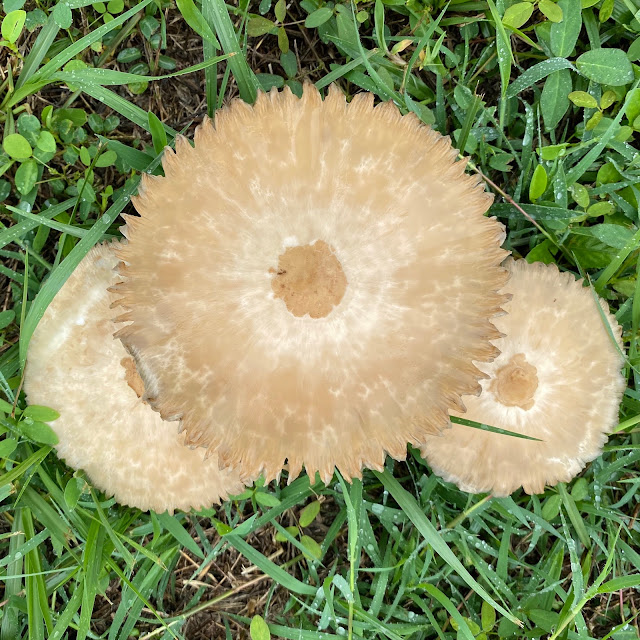 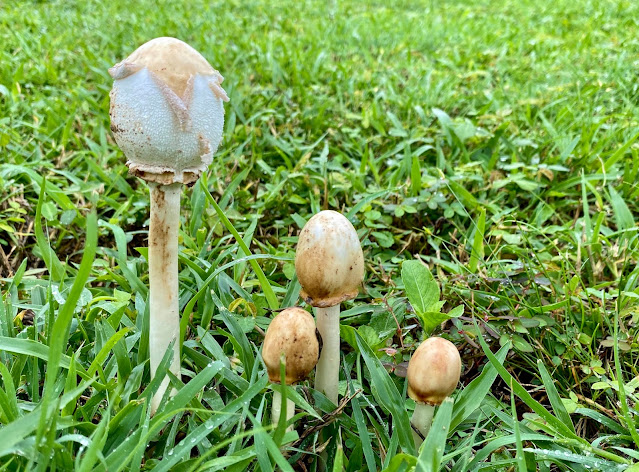 Ok, I feel better now!  So I hopped back into the car where the air conditioner was now freezing me in my wet clothes!  We took look at the radar and it just looked like endless rain.  We drove back along the way we had come and took a chance on finding another of the marked spots on my Google Map. There's a rock formation called La Piedra El Morrillo.  I had only vague instructions on how to access the place, but it seemed like we would have to ask permission to pass on private property. We pulled into an area that might be it, but it seemed like nobody was around and there wasn't an obvious access place... so, dejectedly, we turned around and left.

We passed by a friend's place, but he wasn't there... another dead end.  So at this point, we were just killing time, reluctant to go back home.

But wait!  The rain seemed to be clearing a little.  We hustled back to the beach access road we found earlier, and while the sun was not shining, it looked like we had a break in the rain for a short time.  We took full advantage of it!  With Bruce's help, I scrambled down the embankment at the end of the road and we took off up the beach.

As it turns out, this entire time, we had been wandering up and down this one beach that's broken by the rock formation point, and a small stream.  But from THIS location, we could see it all!  SCORE!

The dramatic clouds gave us a sense of urgency.  Our break in the rain was a short one, so we walked up the beach toward the river as quickly as my foot would allow.  A narrow bank of sand made it possible to cross the river mouth, even with the heavy rains.  There was a lot of brown runoff in the river and it seemed like it was spread out, although that's just a guess.  I'm mystified as to why it hadn't blasted away this sand bridge. 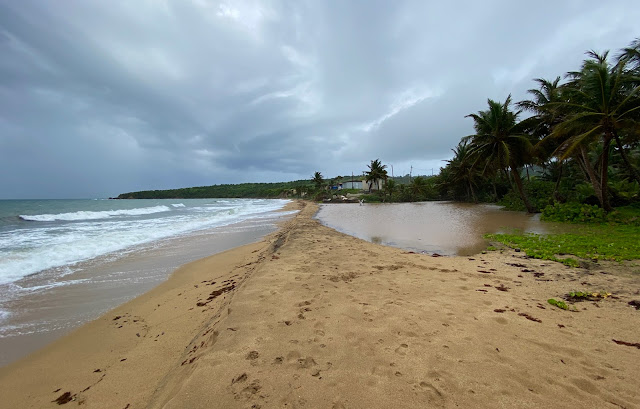 So looking at the small homes across the river, we recognized them as being the the first place we tried to access this beach.  We drove down to the furthest one, and could look out over the beach, but didn't really feel good about staying there.  I would not bet that this beach is always connected to that one, but it's connected today!  I found a few pieces of sea glass south of the river, but the rain was coming and our time was limited! 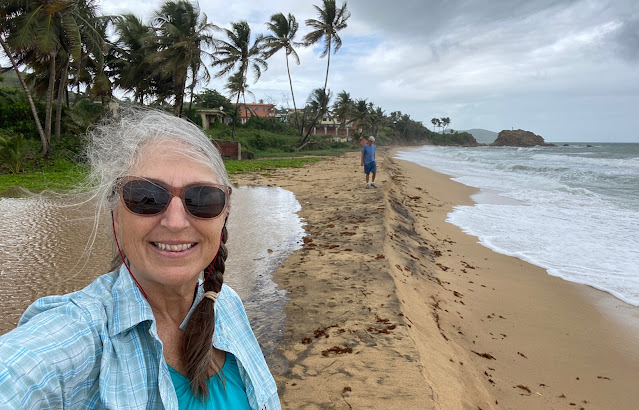 Now satisfied, we put this beach on our list of places to return in the sunshine, and went back to the car.  I only needed a little help getting back up the embankment, and it would probably be easier when it wasn't raining. And at this point, the rain was beginning to fall again!
Well, we had done what we came out to do, and now we turned toward home.  The further south and west we went as we followed the curve of the coastline, the more dry it became.  We began to see spots of blue sky, and then suddenly, the rain was gone!  This prompted another zag off the main road to take a look at one more spot on my map!
We drove to the end of a residential road, and while there was a sign that signified beach access, it was right next to a home and there were "no parking" signs.  Guess you can park on the road and walk in.  We turned around and began our exit when I noticed a narrow road off to the right.  I swerved to take it, and down at the end of this road, there was an open lot.  We found parking on asphalt, and no signs restricting access... And nobody else around! 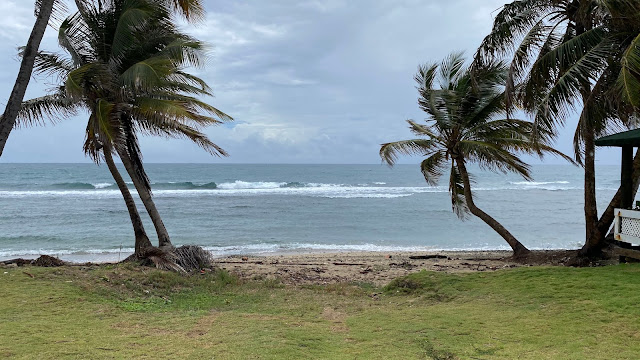 We got out of the car and split up at the beach.  There were huge piles of rocks, which usually signify sea glass... Like our own beach, I would guess that the sand comes and goes.  Bruce went right and I went left.  Within 5 minutes and a very short distance, I turned back because I could carry no more!  I had both hands loaded up with prime pieces of sea glass, and had left so much more on the beach!  We will be back!

So... as it turned out, my optimism about the rain proved true, it was just my timing that was a little off.  We decided to continue on home because it was lunch time and we didn't want to eat out.  But that exploration obsession was well satisfied today!  And now we have added two more beaches to our list of favorites!
No comments: