Weekends On The Beach

We very seldom go to beaches ~other than our own~ on weekends.  Like in most other places, the fun spots are very crowded on weekends when people are off work.  For whatever reason, we decided to break our unwritten rule today!  When we do venture out, it's always fun to see what we're missing during the week!

Sundays are the "big day" in Puerto Rico, so we figured we would be relatively crowd free on a Saturday morning.  We drove out to one of our nearby beach walking spots, and found small family groups already beginning to set up on these gentle shores.  Watching daddies frolic with their young children, and daughters attend to their aging abuelas was heartwarming, to say the least... But seeing the surfing lessons was the most fun of all!

I have jars and piles of sea glass, shells, and interesting rocks that I've collected on all of our beach walks... Honestly, I should be cut off until I can get some of these things made into... something!  Normally this beach can be counted upon to NOT provide much for collecting.  But today, we found a nice handfull of Venus shells intact!  I could not resist!
No comments:

Another Day, Another Beach ~ And A Pterocarpus Forest

Things are easing up a bit here in Puerto Rico in the Covid-19 department.  While it's still here, we have seen a drop in cases and mortality, largely due to the fact that most Puerto Ricans are simply very compliant in doing their part to minimize the spread.  For that, we are thankful.  We're experiencing a feeling of awakening, after a long snooze, and so, must be off adventuring.  Today, we meander to the East again.  Back in October of last year we did some beach hopping, but we knew that we had missed some! Today, with a little more planning, we packed up our beach chairs, and hit the road!

It's about the journey, not the destination!

Nowhere is this more true, than in Puerto Rico.  When we take off in the car, we are always looking for those little things that lead to the big things... The joy of discovering new awesomeness is alive and well in Puerto Rico.  Maybe I need to create a T-shirt that says "Give a Puerto Rican some paint... and they will create magic!" Magic was just what we felt as we encountered these unlikely murals in the town of Yabucoa!

And just a short distance away, while looking both ways to turn onto another road, I found these!  I just could not resist parking on the side of the road for some fun! 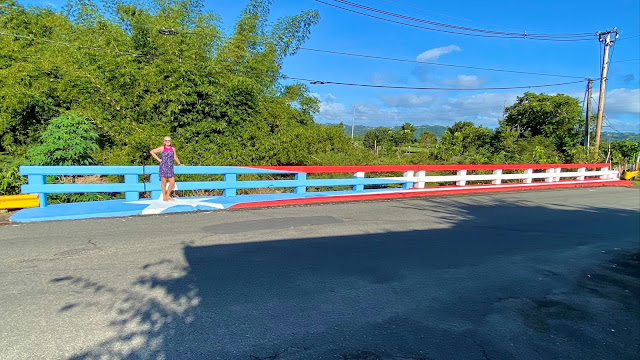 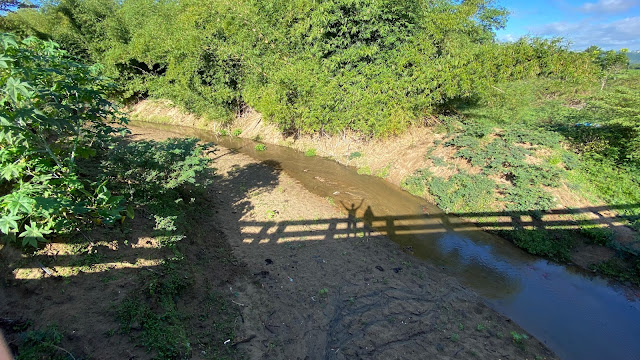 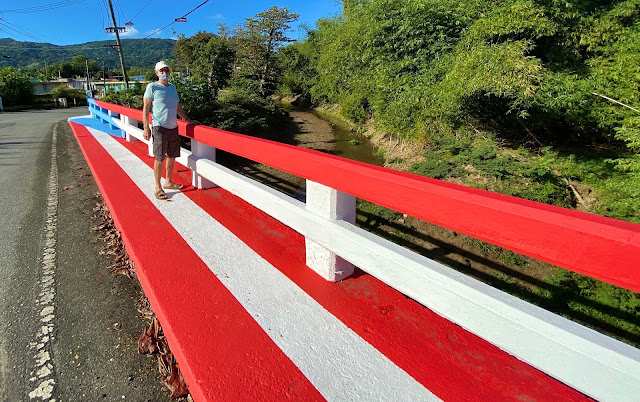 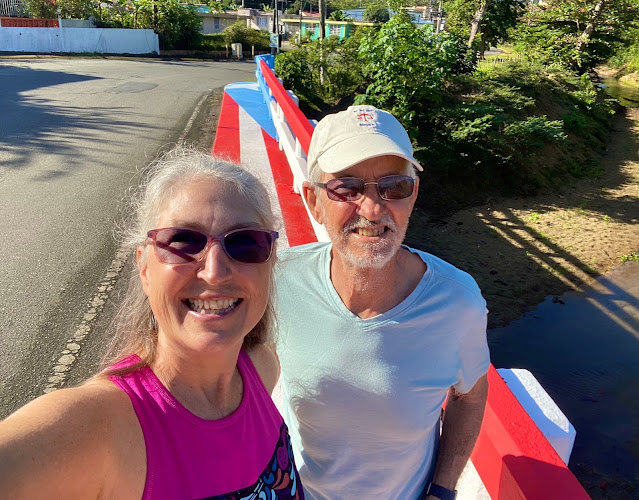 Continuing on our way, we stopped off for a couple of tripleta sandwiches from a favorite panaderia for a picnic brunch at one of Puerto Rico's many balnearios, or beach parks.  Today's find is Guayanés Beach!  There were a few people using the park, and several maintenance workers out making things nice for us... but we drove to the end of the the palapas and unpacked our gear for a nice picnic... with a view!

After finishing half of our sandwich (they're too big to eat in one sitting) we put our stuff back into the car, and went for a walk on the beach.  First we turned left and followed the beach down to a point where we found some fishing boats.  Looks like this is a launch point for local fishermen. 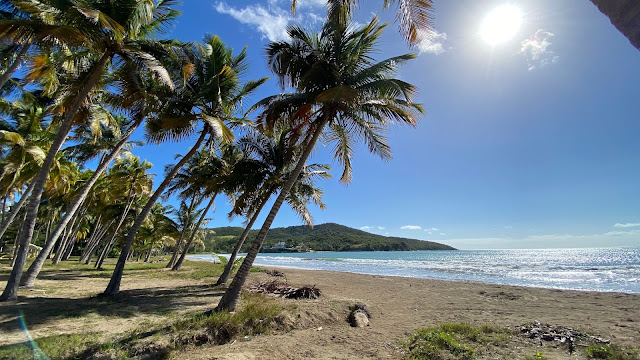 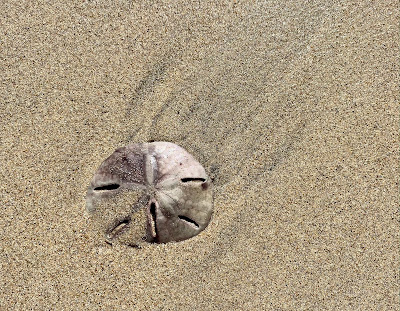 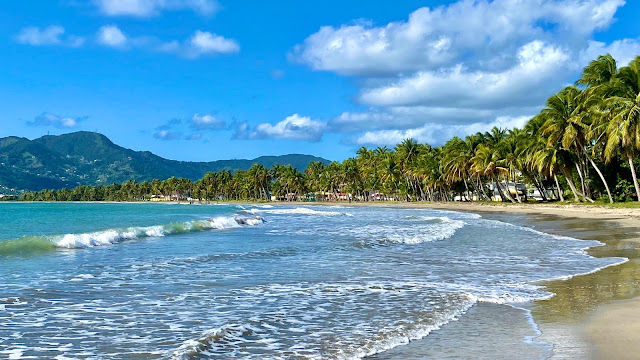 We retraced our steps and continued on south, enjoying the gentle, curving waves and the easy slope of the beach. The distance this way was much further, as we walked on past the end of the balneario.
A few houses held prime position on the beach, but most were in ruins. One looked like a decent B&B. (if you find it, let me know) 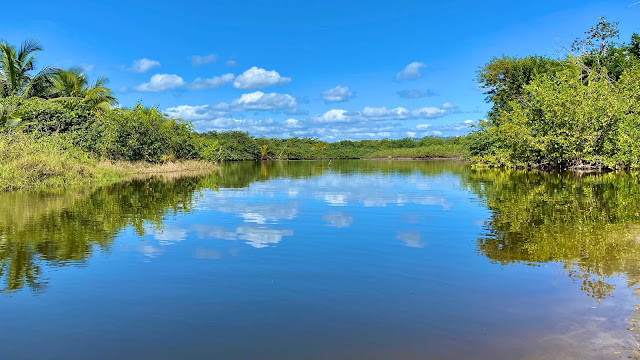 I hadn't really been paying too much attention to where we were in relation to the rest of the coast, and so, was surprised to realize that we were fast approaching the channel that leads into the harbor of Yabucoa.  It's an industrial port that we've visited before, only from the south shore.  Just before we reached the rock piles that line the channel, we discovered the mouth of the Guayanés river. 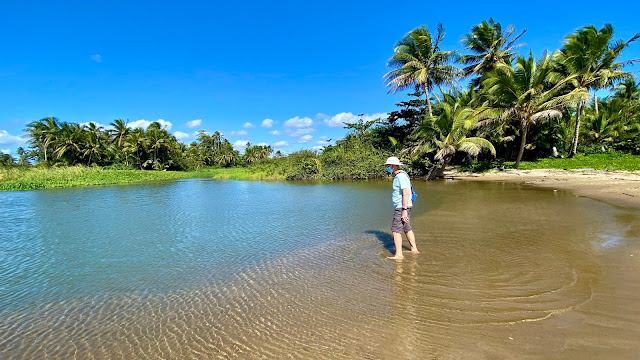 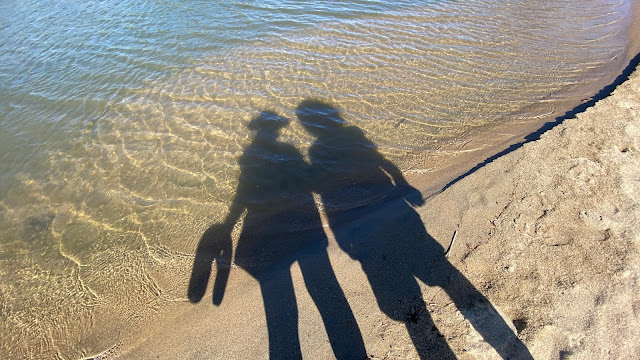 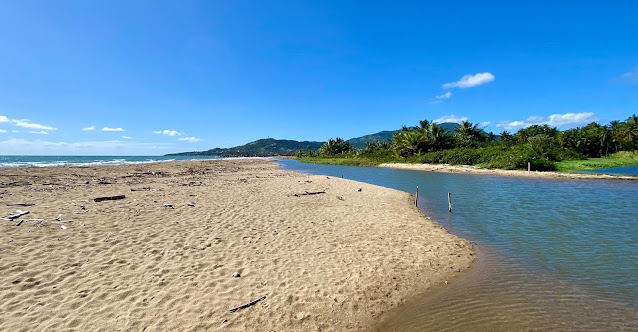 River mouths are always an interesting find, because the next time we come here, it will probably be very different.  Sometimes the rivers completely cut the beach, so that continuing on is impossible, and sometimes they silt in and we can actually just walk across.  Today, Bruce tried it, but I had to convince him that it may not be in his best interest to proceed...
So we played around there for a while, and then began our walk back to the car.  We are continually amazed that we can experience these wildly beautiful beaches completely alone!
If our day had ended when we reached our car, it would have been a very good day.  But it did not.  There is a secret beach that I've been looking for since we moved here... so today, we went in search of it again.  As before, our Google Maps took us onto the property of Palmas Del Mar.  When I spoke to the guard at the gatehouse, he told me that there was no access to the "Secret Beach" from here, and so I asked him if we could just visit the Pterocarpus Forest instead.  So, with my gate pass prominently displayed, we found the parking for this other attraction, also on my list of things to do!
What's a Pterocarpus, you ask?  Sounds like some prehistoric bird! Well, they're a type of tree that is relatively rare, enough so as to be designated as a protected species.  We have several Bosques (forests) de Pterocarpus here in Puerto Rico.  The tree is known for its ability to adapt to growth in freshwater swamp areas, by developing an odd root configuration that has awarded them with the nickname Palitos de pollo, or "chicken sticks (legs)".
Enjoy this short video with the highlights of our walk along the boardwalk, graciously maintained by the Homeowner's Association of Palmas Del Mar.
The boardwalk took us though the swampland, which was at a very low level according to the height gauge seen in the video.  Hard to imagine that the water can get up over the walkway!  The scents of the forest were fresh and unique, with an occasional bit of stinky... But what do you expect from a swamp.  Lizards scattered as we walked the cool, sun-dappled pathway, and next time, we will bring our lunch for a picnic in one of several resting spots.  This place is peaceful and serene, and it left us with renewed vigor to FIND THAT STINKIN' SECRET BEACH!!
We turned in our parking badge and consulted the Google Maps, yet again, for that secret beach.  It kept trying to take us back through Palmas Del Mar.  NO!  So I just kept choosing any road that did NOT look like it would take us that way, and eventually... EVENTUALLY... the Google gods smiled down upon me.  And there it was!

Happily, we braved the wandering puppy that came to bark at us a little, and packed our chairs and lunch out to this ~ the second, and even more wild-and-deserted ~ beach of the day! There is a nicely worn pathway across a well manicured lawn, that leads through the palm line to the beach.  There are signs of life, but not another soul in site on this weekday... always the best time to visit Puerto Rican beaches.  We sat and enjoyed the second half of our breakfast tripletas, and then packed all the stuff back into the car so that we could take a walk! 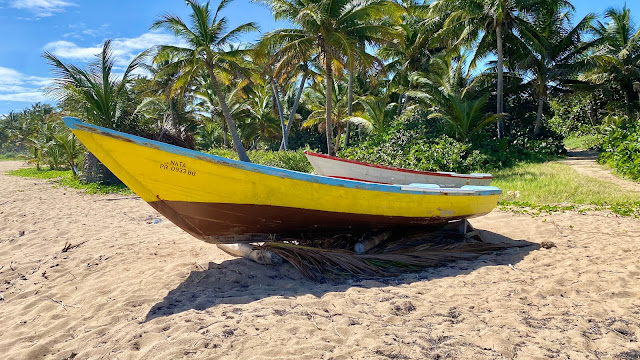 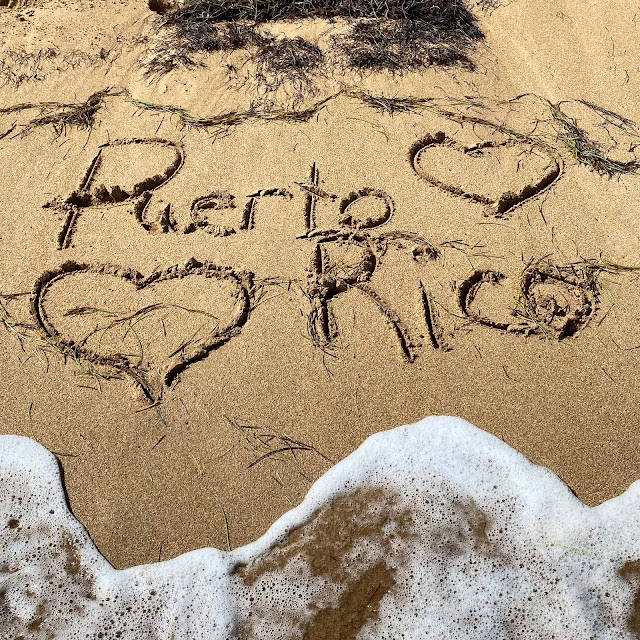 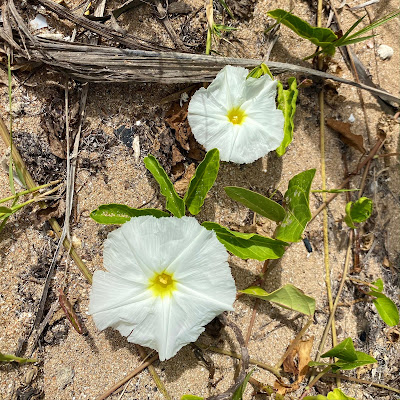 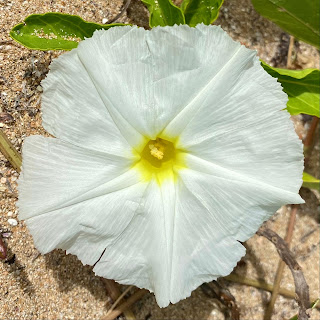 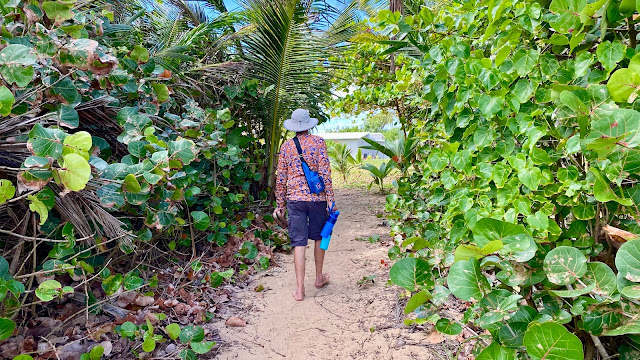 I asked him if he wanted to sit and wait in the shade while I took another walk on this beach, and he opted to go with me.  I think he must have misunderstood the question... because as I set off exploring, he began to balk!
To be honest, I'm not upset that he called for a postponement of this beachwalk.  The after-lunch-doldrums were beginning to join forces with the full-morning-of-activity-fatigue!  Suddenly it was time for us to stick a pin in it, and return home.  But, today was another successful day of exploring our Island Paradise, and we now have even more "favorite" places to revisit!
No comments:


I had planned to surprise Bruce with a side trip to the Botanical Gardens in Caguas after we left the dermatologist's office, but the Gardens are still closed due to Covid. I had a scheduled pickup time at Sam's Club, so now we have an hour and a half to kill.  What to do....

A quick consultation with Google Maps, and I was headed for the Plaza de Recreo Santiago R. Palmer, or more easily said, Palmer Plaza in Caguas.  All of the municipalities have at least one central plaza, and we've never had the time to visit this one during our many trips to the mountain municipality of Caguas.

So come with me and see what we got into! 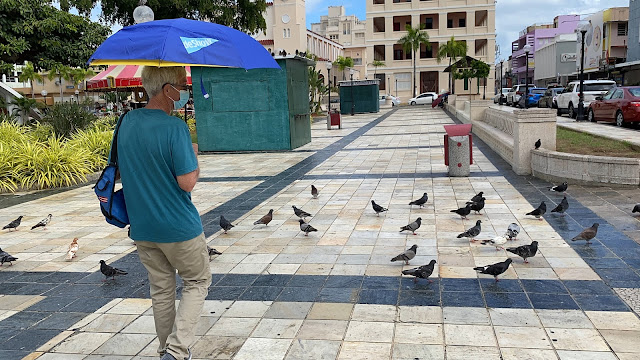 I found parking easily on the one-way street bordering the plaza.  Somehow, I figured out the process... each parking space had a number.  Obviously there is some way to pay for the space... The signs were all in Spanish of course, but I quickly realized that there would be a pay station nearby... I found it, and fed the machine enough to get us an hour!

We strolled slowly along with umbrellas deployed against a light rain.  That did not deter the numerous pigeons, who miraculously appeared around us! 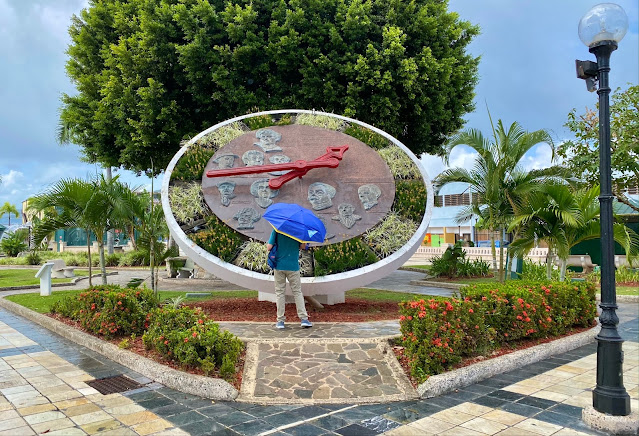 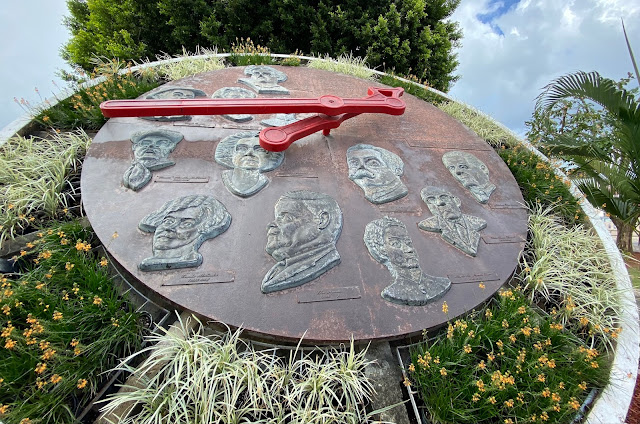 Somehow, magically, our footsteps led us to the door of this artisanal ice cream shop!  Funny how that happens!!!
Because of Covid, we were quickly expelled from the store. Tossed out into the warm sunny day, each with a mountain of ice cream melting down our arm, we found a bench where we could sit, and focus our attention on slurping this TREAT before having to wear it home! The ice cream was delicious!  Bruce got pistachio/coconut and and I got coconut/almond!  (one scoop of each) And for those of you back in the 'States, eat your hearts out!  The cost for both of these with tax was less than $5!! Have I told you lately how much I love Puerto Rico??? 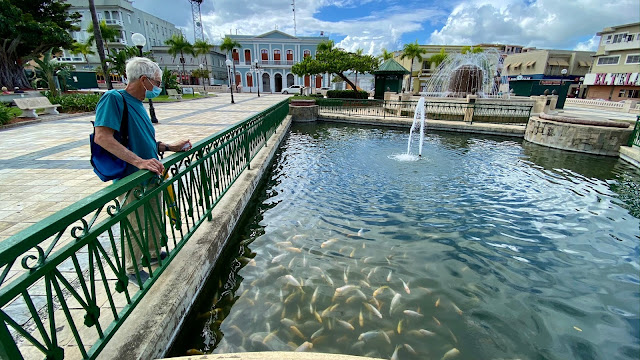 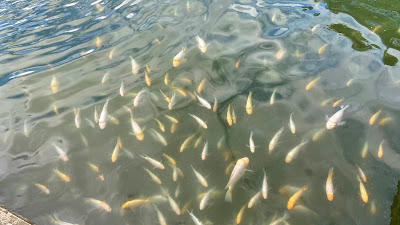 Somehow we managed to finish the ice cream without getting it everywhere.  Thankfully I carry towelettes with me, and we were able to minimize the damage.  With full but happy tummies, we continued our stroll around the Plaza.
I always do a bit of research when writing these blog posts.  After the fact, I often learn cool things about these places, that I wish I had known before.
What I found out this time, is that there are several museums and historical sites within walking distance of this Plaza, that will be of great interest to Bruce, so we will have to plan better for our return visit to Caguas.  Next time, I'll have to plan for more time to kill!  And more ice cream! 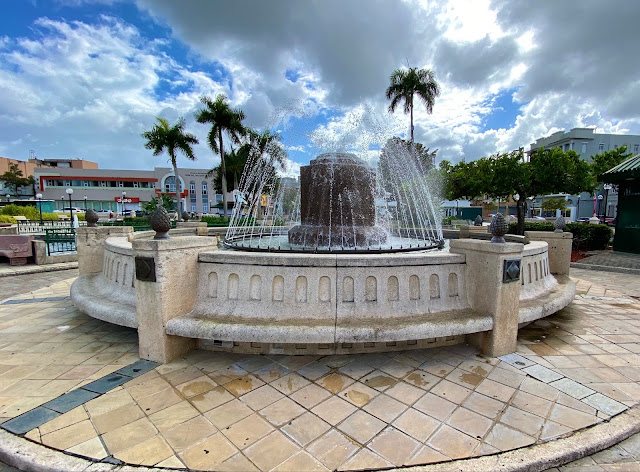 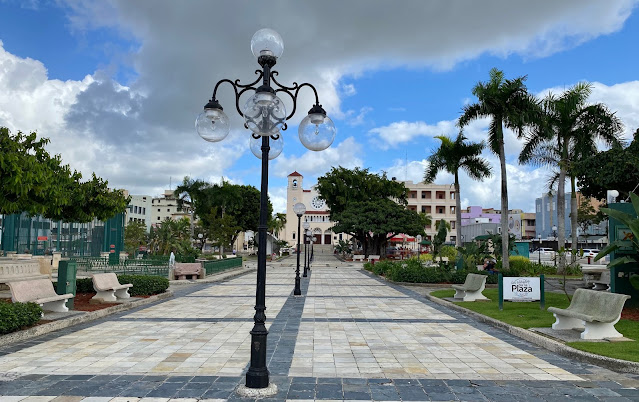