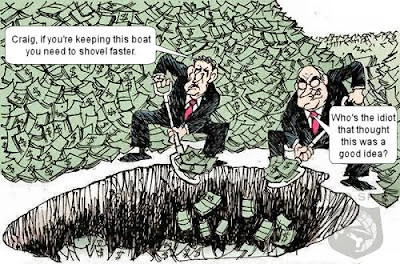 I give up.  Never again will I say that NEXT YEAR we will spend less!  It just never happens.

By this time, we've actually learned to cruise more economically... We spend less on food that gets thrown out, we don't provision in huge quantities.  We anchor out most of the time and have even cut down on transportation costs by learning to take the local bus system instead of renting a car.  Our entertainment costs aren't even that big!  But then the costs for keeping the boat in good shape rear their ugly heads and all our frugal ways are for nothing!

It is hard to believe that we have been here in Grenada for an entire year.  We have been either anchored in one of the bays, tied to a mooring, or sitting high and dry on the hard spending mucho dinero on boat projects!

It is easy to forget how the money is spent, so I'm really diligent at keeping records.  I enter every cent we spend into a spreadsheet that is totalled at the end of each cruising year.  This year we made a discovery that has saved us hundreds of dollars!

Using credit cards is easier than you would think in the islands.  Most places take them and we have routinely used them for groceries, dining out, bar tabs and anywhere they're taken so that we could rack up the rewards dollars and keep easy track of expenditures.

In the beginning, our Bank of America Travel Rewards card truly had no foreign transaction fees.  And while it still technically does not... they have found a way to sneak them in under our noses.  Some months ago, I was reconciling our bank statement and realized that the amounts weren't adding up.  The charges on our receipts did not match what was going onto the credit card.

It took me a while and more than a few phone calls to customer service ~ who, by the way, have NO idea what is going on ~ but eventually I realized that while technically NOT applying a separate transaction fee for exchanging the foreign currency... (drum roll please) they were applying a very unfavourable exchange rate to each charge.  Doing the math... I learned that using our credit card was costing us as much as $300 US some months!!!

Immediately we stopped using the credit card and changed over to a cash-on-hand basis.  While we are no longer building large piles of rewards bucks, the money we save in one month by using cash is about equal to a year's worth of rewards!  So if you're using a credit card in the islands, check your receipts and don't go by what the customer service people tell you.

So, let's take a look at this year's numbers. Our categories have remained relatively consistent from year to year, showing you everywhere our money goes.  This year we had a record amount of expenditures for the work we had done on the boat.  Our boatyard bill was big, but we did a lot starting with the bottom job, where we took the paint off down to the fiberglass and had a new barrier coat applied... to the cosmetic work we did on the freeboard part of the hull... to the preventative maintenance we did on the engine, rudder post and prop shaft... it all added up!  Then we replaced all of the standing rigging and lifelines, as well as some of the running rigging.  We topped it all of with a nice new survey from Neil at Mango Projects!  We highly recommend him if you're in need of a survey.

All of these boat related expenses can be deducted to leave you with the costs of simply living in Grenada.  I guess you can't really call it cruising, since we haven't moved the boat further than the next bay over for the entire year... But you know what I mean!

So, without further ado...

Next year may be very different if our plans for Puerto Rico pan out, so this might be the last year that our cruising costs are 100% time on the boat.

You can take a look at our previous years and compare:
Year Four
Year Three
Year Two
Year One