Year Three Reflections On The Cost-Of-Cruising 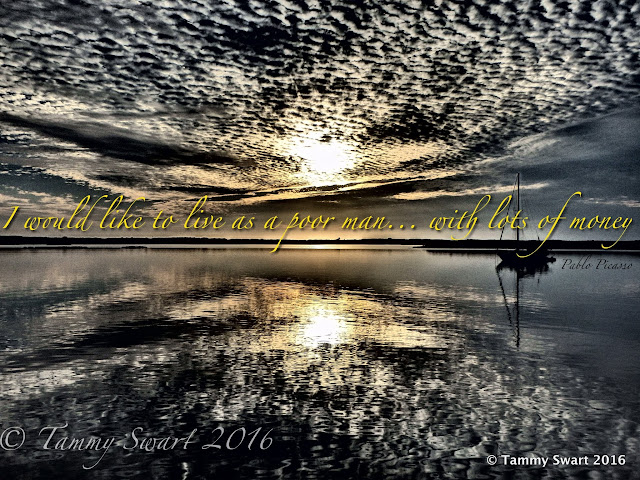 I never learn.  Last year when I posted our total Cruising Costs I said... "We've spent a LOT of money on upgrades this summer.  But our hope is that when we leave the dock later this month, we will be good for a while"...

Yes.  That is what I said.  And this year when I saw the total, I thought once again that my own words have been used to slap me silly!!!

But when you look at the breakdown, there isn't any one thing that really stands out.  The boat insurance was double because of the timing... we paid it at the beginning of this year and again at the end because we paid it a bit early.

We no longer have a car, so there are no expenses for that this year, but we have a home and the costs to insure it should not be considered for Cruisers who don't plan on keeping a home so I have removed those.

But otherwise, I would say that our costs this year are realistic for a couple cruising on a boat similar in size to ours who have "Normal Cruising-Life Expectations".

But what does that mean?  What is "normal"? For us it means that this is our life.  We aren't on a "trip".  We don't expect to be out here for a year, or two years, and then return to what we left behind. In fact, our mindset has shifted during this last year.  When we left the US we were still "on our way to somewhere".  We had a destination in mind and we were sort of in a hurry to get there.

It's difficult to even quantify that to someone not in this situation...  Everyone asks us "Where are you going next?".  And we've always had an answer...  When we arrived here in Salinas for the summer, we really HAD no answer to that question.  We had several options in mind, but had no definite plan.

At some point in the summer I realized that we have truly adjusted to life as Cruisers.  We are just out here doing whatever we feel like today, and that our plans are completely fluid.  Of course we must have SOME sort of idea in mind that helps us to make  our daily decisions... and we do... but it is completely open ended.

The transition has been so insidious and sneaky, that we were truly amazed when we realized that in the past 6 months we have been within about a 160 mile area.  We arrived to Puerto Rico on April 4th and have not been further than Anegada in the last six months!  We've just been moving around the area at leisure, not hot to get anywhere...  And it feels nice!

This is where we live... No more do we save up our visits to the Doctor or the Dentist for when we get back to the US.  No more do we need to provision for end-of-times... we just buy groceries like everyone else!  Well maybe not entirely, there ARE places in which groceries cost less than others we will visit soon, so we do sort of stock up...  But there will be another place along the way soon where we can re-stock again...  We've also been buying things from Amazon Prime because they DO ship to Puerto Rico and it's just so easy!

But back to the question:  What IS normal?

I would say that it is splitting the time between anchoring, mooring and marina stays.  Sure we love being at anchor, but there are lots of places that being near the "action" means paying for a mooring.  For us it means that we get a slip either for a day, a week, a month or longer whenever we feel the need.  It is just much easier to do repairs or host visitors while in a slip.  We have made a habit of finding a reasonably priced slip in which to spend the hot summer months.  There's no need to languish on the boat, sweltering and sweating profusely when we can plug in and be comfortable all summer long.  We aren't masochists and there are no prizes for martyrdom out here...

We rent the occasional car both for running crucial errands and just for fun.  We do some touristing and we eat out when we want, which I will admit is not really that often...

Is it possible to forego these pleasures and get by more economically?  Sure it is... but this is our life.

And because I never learn... I'm going to say it once more... I HOPE we will get through year four on less... wish us luck!

Oh, and because I nearly gave somebody a heart attack... Cruising costs can vary widely for different size/type boats.  We cruise a 1995 Catalina Morgan 45'.

What's in Technology?  That's where I put things like iPad navigation apps and purchased electronic charts.  This year the biggie was for a new Mac computer.

The liquor bill is ridiculously low, what's up with that?  The liquor category on the spreadsheet only includes liquor purchased independently.  In the islands, hard liquor is mostly purchased in grocery stores and I'm not going to pick my grocery bills apart.  So it looks like we don't buy much, when actually it's hiding in the grocery category.

Tips?  The tip category only includes those handed over in cash and does not count what's on our dining out and bar tabs, so tips we have paid are really more.