One Man's Movement is Another Man's Drift... 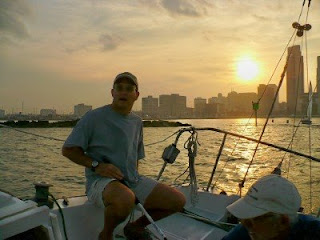 This Wednesday Night Race in Corpus Christi began with relatively light air, and progressed to relatively NO air! We had our best start position ever for the crew of Cute Shoes. We were above our fleet and held our position out the gap. We kept the competitors where we wanted them as they tried to eak up on us from behind.

There was a beautiful view of our beloved city as I glanced behind to see the spinaker fleet start. 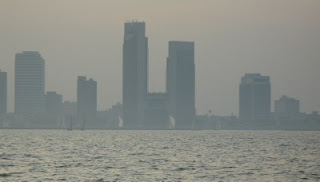 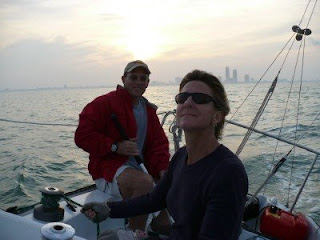 Jacquie has been putting in the hours on the boat and has learned very quickly where everything is and how it all works. She is almost a one-woman-show! This is lending well to my goal to become the crew photographer with a minor in ballast! Bruce, Steve and Jacquie did most (all) of the crew work tonight while I was moved from one position to another in order to maintain optimal balance in the light air. 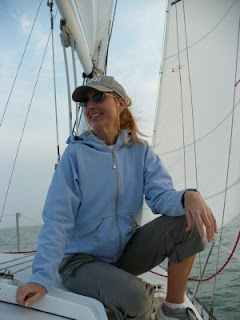 Light air racing is an art and requires different stratagies from our normal heavier air racing.


As the race wore on, we made it out to the windward mark, #3 and rounded in good position. The fleet was all over the place. Several spinaker boats had rounded and popped their chutes. It was dark by this time but I got lucky and was able to get one acceptable shot to show you here. 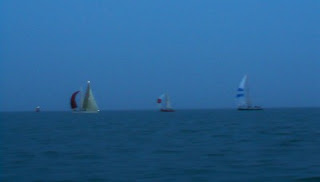 We began the race towards the finish with steadily decreasing winds. Before the end, we had barely enough wind to move. We could see even the spinaker boats off in the dark barely able to make their boats go even with their bigger sails... how could we expect to ever make it in. We laughed as we barely moved along ... Steve had to go below and I was left with the helm. I had my doubts but with these "winds" how could I mess it up. I was nervous at first but then it got fun! Maybe I could be a "tiller girl" yet! 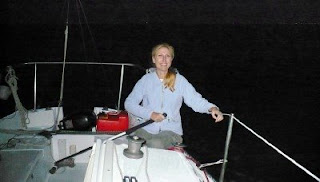 We tried everything to get some foward motion. We flopped the sail from one side to another. I held the main out to the port side as the jib hung lifeless! "WE'RE MOVING" I cried!! "WE'RE DRIFTING" Steve countered!!! We eventually made it in through the gap and headed up towards the finish line. Milky Way started their engine just at the gap. We couldn't figure out why... they had made it all the way there, why throw in the towel just when it got better? Oh well, we finished and we're happy. Motto of the race... "One Man's Moving is Another Man's Drift"