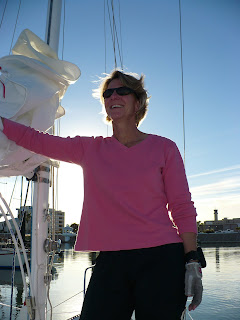 It's heating up here on our good 'ole CC Bay! Finally, a Wednesday night race without a parka! Jacquie and I were both jubilant! 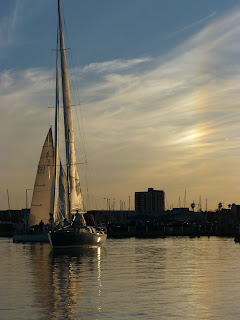 The winds had been howling for days but today... nothing. The gathering of boats drifted around near the start line as we wondered if there would be enough wind to get us out of the gap... let alone back before morning. Today I began to believe it will soon be spring!

Steve made the call to go all sails, which meant we could use our spinnaker in hopes that it would make the boat move. We changed to the biggest head sail he owns... the Beast... and tried to get ourselves back to the line in time for our start. The water was flat and the first start was just drifting towards the gap in this video. 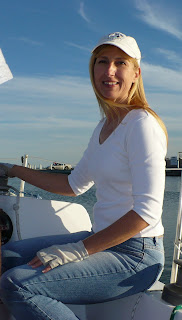 Somewhere between the first flag and ours...the third, the winds suddenly appeared. It was amazing! Where did it come from? We were now carrying way too much sail but it's what we had. So off we went carrying the Beast and dumping the mainsail so as not to overpower the helm. It was exciting! We rounded the cans at the gap and tacked over towards mark #1. We were in good position and staying ahead of Pazuzu. We made up ground on two boats ahead of us where one was taking the other up. Good for us! Just after rounding the mark, which was very soon, we tacked towards #10. Both of these markers are very close in. The race committee had expected a very slow race with no wind. We had a neck & neck race with Pazuzu trying to keep them on our stern. I played the jib. There's nothing like close racing.

After rounding #10, we found that it would be a reach, so our preparations for flying a spinnaker were for naught. We probably wouldn't have been able to get the spinaker up before we reached the gap at this speed anyway. There were many other boats behind us, just like we like it... as you can see in this video. Bruce was keeping Steve apprised of their position so that he could decide where he wanted to be strategically. It was a beautiful night. The winds had settled a bit but still kept us all going.

The finish was no letdown tonight! After we rounded the gap cans, we knew we would have to tack before the line. Steve chose to go all the way to the wall and then make our way back across on starboard tack so that we would have right of way. This didn't get us much! As we gained speed out of our tack, we saw What If, a J30 coming across our bow. Steve screamed "STARBOARD". If this sounds familiar, it is! We were in the other position last week as we fouled Stoopid Monkey in the same way. Steve had to come up at the last moment still thinking we were going to hit them. They acted like they would have made it at the time, but after the race, they came by and made their apologies. All is well. We're anxious to find out where we finished. It would have been better had we not had the little glitch at the end, but it made for great memories and added to our story repertoire. 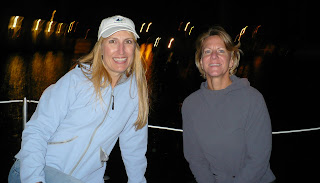