Bruce and I spent a cozy night aboard Elan 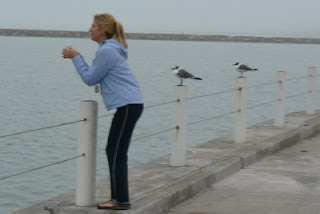 at the CC Marina and awoke to the sound of birds. We took a cup of coffee in our favorite boat cups and strolled around the marina. It was cool with light winds and fog. I had some fun trying to be one with the seagulls. We had breakfast on the boat and straightened up a bit in preparation for our first race with BYC. 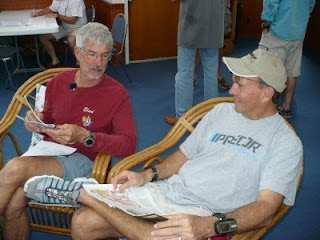 We met up with the bunch at BYC at about 10:30 and waited for the skipper's meeting scheduled for 11 am. Steve and Jacquie were returning the favor and had signed on as crew for the race on Elan.
The race was planned as a "persuit" or "staggered" start which means that the handicap was applied at the beginning of the race. Boats followed one another across the start line at precise intervals based upon their individual handicap. This makes for a more exciting finish as you know how you did by what place you actually cross the finish line.
But I'm getting ahead of myself... The winds were blowing a bit and from ESE when we went into the skipper's meeting. The course was planned for that but when we came out to begin the race, the winds had begun to blow from the North and were stronger. Bruce had taken the headsail down to change it out. He decided to use the 140 headsail thinking that the winds would die down. We had some trouble getting the sail raised as the minutes ticked on towards our start time. As the 9 boats entered in the race jockeyed for position before the start, we passed Starfish, a Catalina 36, that seemed to be in irons... this means they had stopped moving and had lost control. We looked back at them after hearing a loud THWACK!... to see them drifting away from the bulkhead leaving a white mark on the cement and a wedge shaped chunk missing from their hull. Our hearts sank! The race was over before it began for the crew of Starfish.
We continued on... wondering all the while what had happened to cause this. The winds were coming straight from the direction we all wished to go. This is difficult to deal with as there isn't much room to maneuver inside the protective breakwater surrounding our marina. Elan was the last boat in the staggered start. This means that we were expected to be the fastest and be able to catch up to all of the other boats. We were about a minute and 15 seconds late in crossing the start line. Strike one! But as we began to make way towards the gap, the wind shifted and allowed us to go straight at it, unlike the boats before us who had slowly tacked in that direction.
There were three boats converging on the narrow gap at about the same time. We looked on at them from our closing position and realized that one of the boats was beginning to drift back with no control right in the gap! Before we knew it, one boat unavoidably plowed it's anchor along the side of the stalled boat, taking out the stanchions as they collided. The stalled boat had some damage to the rigging as well. We stared in horror as our friends on Sea Flight sailed right across above this carnage. From where we were, it didn't look like there was any way for them to avoid being one of the casualties but they broke free and went off unscathed. We made the decision to break away to avoid joining the fray and had to go way off course and come back up after the two damaged boats limped back to their slips. That's 3 down before leaving the gap! 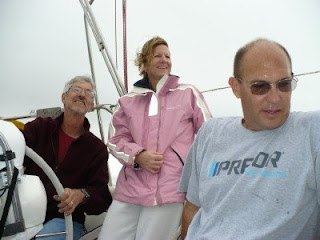 We lost many minutes avoiding the carnage which, added to our bad start, almost assured us of not winning this one. But, you never know in sailboat racing. We got out of the gap and were off on our way trying to play catchup to the fleet. We had already beat Steve up with all of the drama and maneuvering. He was drenched in sweat and stripping off layers of clothing.
We were off in persuit and things were feeling good. The large sail was trimmed well and the boat was bounding along. Steve was invaluable as he continued to evaluate sail trim and make subtle adjustments to get all we could out of what we had. We wouldn't have been able to do it without Steve and Jacquie! We rounded number 5, the furthest mark in this race, without any further drama. We were steadily making up ground on the other boats. 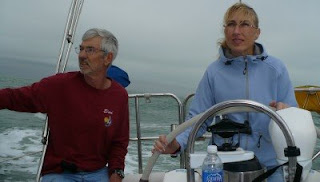 I got to take the helm for a while after the rounding as we searched for the next mark, #3. We had to take unusual measures with our sails to get every bit of wind. Here is Bruce using our boat hook to push out our jib. Is that even legal??? 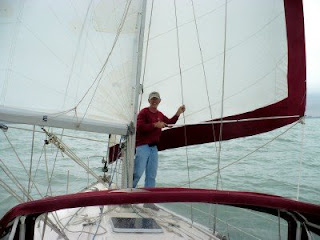 We (mistakenly) followed several other boats until we realized that we were going (shall we say) the long way. We adjusted course and quickly made it to the mark. We got there ahead of the boats we had been following since they had gone further off course than we had. 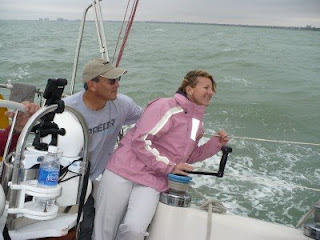 Once we rounded the final mark it was head-for-the-gap Katie-bar-the-door! We were eaking up on our competition and this was basically our last chance. The first and second place boats were taking each other up. This was good for the third place boat but not good enough for us to place. We just couldn't get closer than 4th. Well, we were OK with that. Had we had a better start, we might have placed third, but that's sailboat racing. We had all had a great time and a wonderful exciting day. 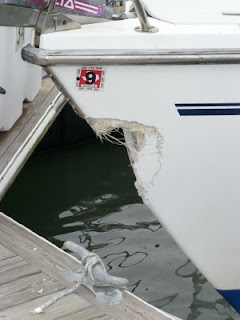 We went back to the slip and put the boat to rights. Steve, Bruce and I met up with some of the other racers over on the BYC pier. We gathered around the damaged Starfish to get the gossip. Here is a shot of the divit. It looks bad to me but others say that it isn't structural and that a bit of fiber glass will have it fixed right up. I feel so bad for the owner.
Here is a quick pic of our friends Mark and Brenda who had narrowly escaped the 2nd disaster in the gap. They told us that they weren't as close to the collision as it looked from our vantage point. But it was still hair raising for them. 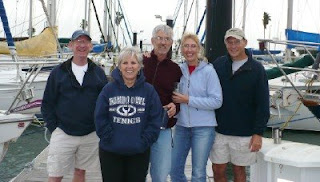 We spent the afternoon shuttling cars with Steve's help. We had one bit of bad luck after the race. When we started the engine on Elan, there was no water coming out which means that the engine could overheat. We would need the van around so that we could go for parts on Sunday. I couldn't believe Bruce was not worried about it. But... we had partying to do. After a (very) short nap, we dressed and went back to the BYC clubhouse for the Valentine's Day Social. There was a mile of junk food waiting for us from fried cheese to chocolate covered strawberries. What more could a girl want for her V-day dinner? Well, that would be to spend it with new friends... 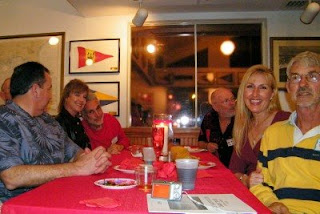 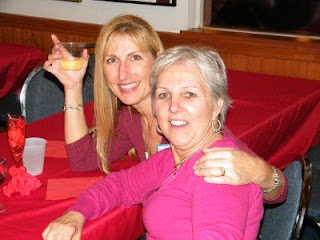 Here are Brenda and I well into our cups of wine! It was love all around! 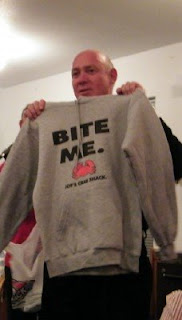 There were some brief announcements to be heard. Joe's Crab Shack has agreed to be our sponsor for this year's BYC race series. They gave some prizes to be awarded after the race. Chip, the owner of the boat that had the "bite" taken out of it, won the best prize of the evening. He accepted graciously but declined making a speech! He was a very good sport and I'm not sure I could smile like he was were I in his place. Please visit Joe's and tell them BYC sent you!
http://www.joescrabshack.com/
People began to leave as the party came to a close. Bruce was ready to slink off to the boat to crawl back in bed... but I hadn't had this much fun in a long time. I didn't want to leave. The die hards hung out and discussed the problems of the world and a good bit of gossip. I think we're really going to like this bunch. 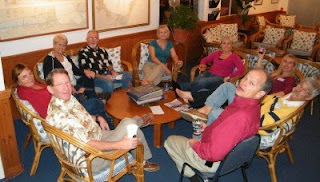 Finally, Bruce threatened to leave without me, so since the wine was gone... I consented to accompany him. We tottered off to the boat and fell into deep happy slumber. It had been a VERY good Valentines Day!