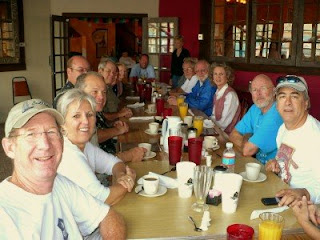 Saturday night Bruce and I joined the crowd at Bay Yacht Club for a really nice Puerto Rican Dinner. One of the members from there made a traditional Arroz con Pollo that was absolutely delicious. I've had it before but never with olives and lots of garlic....mmm. This, and the warm welcome of the other members pushed us over the edge... we joined the BYC.

We've been knocking it around for weeks as we've run into their members everywhere we go. They've always been eager to invite us into their group and share the fun. I've always felt like a usurper and have not wanted to crash their parties, but they wouldn't take no for an answer. So, to keep from feeling like criminals and also so that Bruce will have an outlet for his racing urges, we joined.

We have our first race as members this coming Saturday...Valentine's Day. It will be followed by some kind of party. I'm looking forward to it. I'm hoping that the weather will be nice. 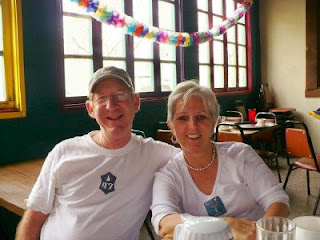 After Saturday night's party, we rejoined the group for breakfast at Bahia restraunt for a late breakfast on Sunday. Bruce and I had hair of the dog on board Sea Flight with Mark and Brenda, then walked across downtown to the eatery where most of the bunch had already gathered. It was great fun too. These people all share common interests and have an aversion to sitting around doing nothing. My kind of people... So, we're joiners!