It's Never Too Late for a Mid Life Crisis! 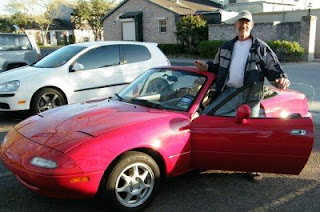 I got a phone call at work today from Bruce. He doesn't call me at work much... a throwback from his years as a teacher where you only got emergency calls. So... I was curious... what was the emergency? He said to me... "I BOUGHT A CAR!" 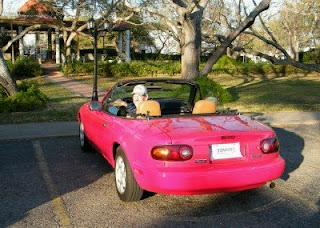 Well, we had been discussing getting something for him to zip around in and getting rid of the motorcycle. It always makes me nervous for him to be out riding on the motorcycle. People don't see them and every time he's on it I'm waiting for "that phone call" somewhere in the back of my mind. So anyway, he had been looking around online and found some interesting prospects in Houston and San Antonio. 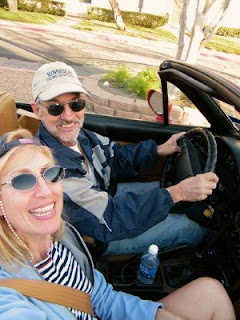 We had discussed only this morning that we didn't want a convertible due to the fact that it would be the same thing for me as it had been with the motorcycle... bad hair! I almost never rode the motorcycle with him because it gave me "helmet hair". So we could only ride around and never actually "go" anywhere on it. Well... obviously that discussion went out the window.
Here it is... the red convertible... we've named it "The Beater"! I'm sure I'll have a good time riding around in Bruce's little Mid Life Crisis.