Sunday morning Bruce and I awoke again to the sound of thousands of birds squawking and chirping all over the marina. We took a short walk to get them for you here. The effect of the sheer number of them all over the boats and marina, not afraid of us as we walked into their midst, is enough to creep anyone out. Steven King would love this.

I apologize for the bumpy video as I walk. 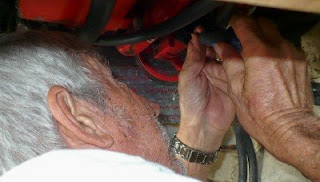 We had some engine trouble at the end of the race on Saturday, but Bruce put off worrying about it until today. After breakfast with the BYC group at their favorite down town Mexican Food place, he stood on his head in the engine compartment diagnosing the problem. 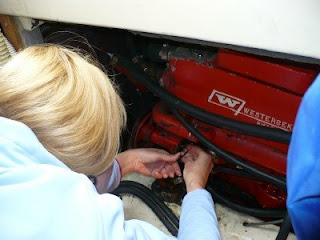 I was called upon with my smaller fingers to help in the cramped space.

Bruce and I talked (argued) it out and finally agreed after replacing the ($65 a pop impeller to be on the safe side) that the engine seemed to be sucking air in through the cap on the canister which holds the crud basket for the raw water intake system. The engine sucks in water from the outside through a hole and strains it through a basket so that no seaweed and such can get into the engine. This strainer has an access cap so that it can be checked and emptied. The lid has a gasket which was not (it seemed) sealing properly. 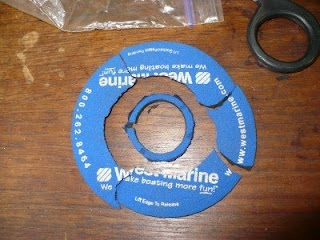 So, I found a piece of neoprene coozie thingy and cut out a crude gasket. Thanks West Marine for giving us this sacrificial freebie. We put it on and started up the engine... it worked!!! 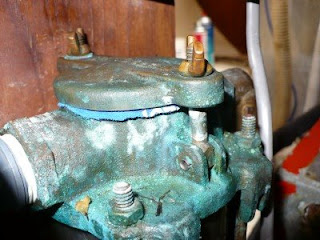 You can just see it sticking out from under the cap, but you get the idea...

And then it quit working. But we now knew what the problem was. All we needed was some cork gasket material to make a real gasket. Luckily we had the van, thanks to Steve. We went to town for a sheet of cork and rubber gasket material and then to the house so that I could make the gaskets. I cut out 3 so that we would have spares.

We went back to the boat and installed one, and it worked! Off we went. It was 3pm and we had to make our way upwind back to Port A... not a minute to spare. 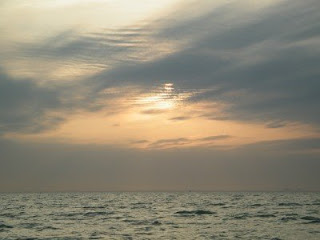 We had a really beautiful sail making our way to marker 43. At that point we again started the engine. Our gasket wasn't working!!! Oh NO!! so back up with the sails that we had begun dropping... and Bruce went below to install a second gasket on top of the one. 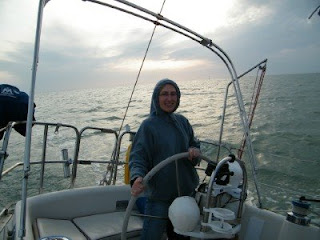 This worked and so we doused the sails and motored our way slowly up the channel with the wind on our nose. Luckily the tide was slack to slightly favorable. It was a long slow slog as I was charged with listening to and watching for the water spurting from the outlet behind the boat to make sure our gasket continued to work. It did... and I gradually relaxed enough to enjoy the night transit. We really love the chart plotter as it makes night sailing (or motoring) really not a problem. We had no channel traffic until right near the ferry crossing when we had 2 other (bigger) boats pass us. We were well over to the green side and they caused no stress.

We parked Elan in her slip right at 9pm. A long day. We quickly put everything away, gathered our stuff and headed home. We would pick up the van at the CC Marina on Monday morning.