That Was One Raucous Ride! 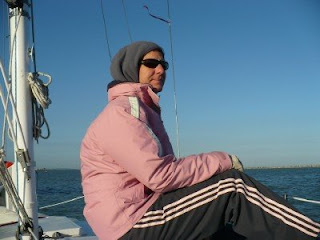 Bruce hadn’t looked at the weather predictions for Wednesday night when he told Steve on Tuesday that we would be there. My week at work had been so intense, I needed a sailboat race… so with the winds really kicking up, Bruce met Steve early and I drove out to meet them after work. It turned out to be a good thing that Bruce and Steve went out early without us girls. They decided to reduce headsail and change the main to an old one that wouldn’t matter so much if it was damaged.

There were more boats out than I thought there would be with this wind. We had quite the race. It was neck and neck going out of the gap. This is what it’s supposed to be like! There was no time for chatting, it was all about position and sail trim. We watched the other boats in the fleet and kept Steve apprised of their status while the efforts of steering the boat wore him out. I thought as I sat up on the rail, “this would be perfect if it was just bikini weather”. We were all bundled up in our foul weather gear. It was our first really wet ride on Cute Shoes, but it was exhilarating! 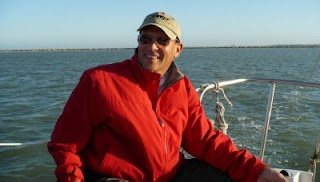 We rounded marker #2 on our port side and headed for the next mark, #19. As we got closer, there were many other boats coming in at about the same time as we were. It was hard to see where everyone else was and we inadvertently fouled Stoopid Monkey by failing to stay out of their way as the rules dictated. We crossed in front of them and tacked over to barely make the mark. They yelled “STARBORD” at us, letting us know that they were fouled. This means that in order to get a “finish”, we must turn Cute Shoes in 2 full circles… a 720. As soon as we safely rounded the mark, Steve called for the first jibe and threw the tiller over. I was on the cabin top and had nothing really to hold onto. As the boat came hard over, I saw myself in my mind’s eye, slowly falling towards the side and slipping into the bay. I was able to catch myself with an arm over the lifeline and a foot on the toe rail with one leg dangling overboard. But, no harm done. The boat came on over and we went around. The tiller extension got caught in the main sheet as we came around for the second time. I saw it and thought there was no way we were going to make it. The extension broke off and freed up the main and we were soon headed off in the right direction towards the final mark and the finish. 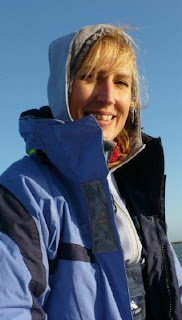 I remember thinking as I clung to the lifeline, “I’m glad it isn’t bikini weather or I’ld have a mean case of deck rash”. Thanks to all of the layers of foul weather gear, just a few bruises. The rest of the race seemed tame by comparison but was still fun. There was no time for beers as we surfed the boat downwind to #2 and then the gap.
Now, as the days go by and the bruises rise to the surface of the skin all over my body, I think how this race was like the old times in my fearless, death wish, post divorce days a decade ago. I had a motto then… “If you don’t have scars… you didn’t have fun”! This was FUN! As we sailed into the calm waters inside the breakwater and finished the race, we lowered the sails and Steve summed it up perfectly. He said “that was one raucous ride!”… and all agreed.