Sometimes The Weatherman Is Right

This morning we slept late and then had a lazy morning at home. We poked our noses outside and it was COLD! Oh no... I'm not sailing in this cold. My mouth is frozen so that I can hardly speak! Well, we were committed to sail with Steve in the MORF spring series today. We held off making any rash decisions. Let the weatherman have a chance. He had promised high 60's and light winds... not the very strong winds blowing out there 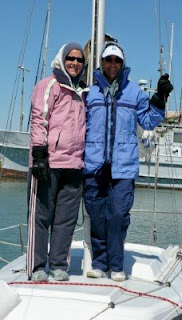 I put the final coat on the closet and the painted the top of the shelves. We put all of the painting stuff away, dressed (warmly) and packed up our sailing gear. We met Steve and Jacquie at the marina. They had the boat all ready to go, but had yet to commit to the race. The wind was still up and we were in the sheltered marina area. Jacquie and I put on our gear anyway. 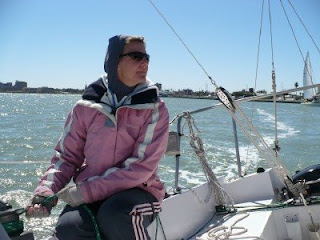 We decided that we would sail around out there for a while and think about sail choices. Once out on the water, the winds convinced Steve to change to a smaller headsail and reef the main. Down came the 110 jib and up went the 90. We were set and the decision had been made to do the race. 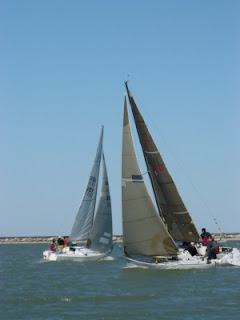 We had quite some time before the race began. There were lots of boats out testing the winds, tacking and jibing and planning their strategies. Finally, the race was on. We had a good start with 4 other boats in two fleets. We were being passed by the other boats as we made our way towards the gap. Steve was trying everything but the headsail change had been a mistake. Well, we weren't out in the wind yet, maybe it would be stronger outside the gap and we would be ok. 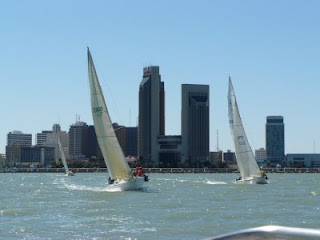 Once outside the gap, it seemed as if the second start boats made up the distance way too fast. The boat seemed to have a hard time punching through the sloppy waves from weakening but gusty the North wind. 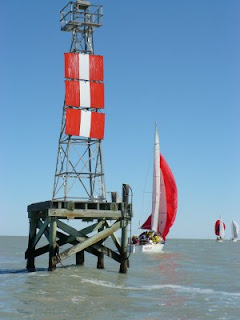 One by one, the other boats caught up to and passed us as we neared the first mark. Steve decided that it couldn't hurt to take down the headsail and put the 110 back up. It could only help! We had nothing left to lose. 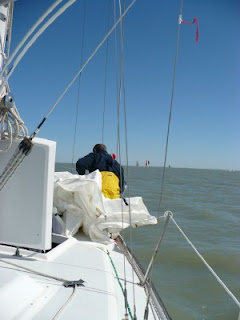 So, after rounding #19 and settling on our course towards #3, Steve handed over the tiller to Jacquie and went up switch the sails. It seemed to take forever, like slow motion, but finally he was done and up went the larger sail. You can see the boats with spinakers sailing off into the distance. 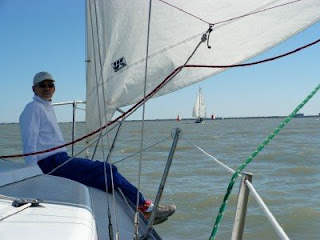 We had only one other boat in our fleet that we needed to catch and they owed us time. We slowly made up ground. That is them right in front of us in this picture. 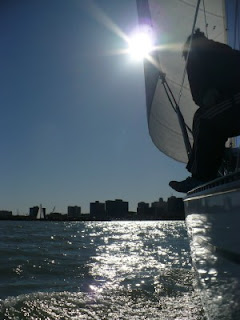 The winds continued to drop and the sun shone brightly. We shucked off layers of clothes and began to really enjoy the sail. It would have been perfect had we not been bringing up the rear. We rounded the second mark very nearly catching the competition. The race to the third mark was neck and neck. The winds were frustrating in their inconsistency. We made up a lot of ground by the last mark and headed for the barn. 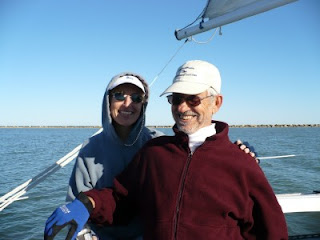 We never did catch them but we were all happy to be there... thinking we had almost decided not to go. After the finish line, we sailed up and back for a bit, enjoying the calm warmth inside the gap. We had doubted the weatherman before the race, he said that the winds would come down. Had we not made that sail change, it might have been a different race. Sometime, the weatherman is right! But we aren't counting on it! 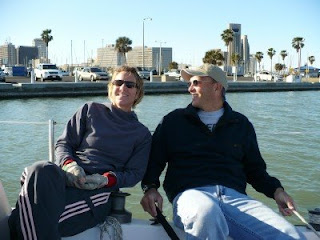