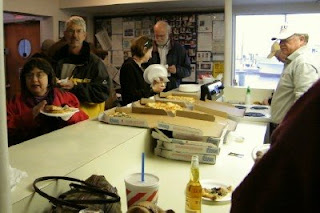 Bruce and I went down to the BYC Clubhouse on Friday for a free seminar on sail trim given by Freddie Soward. He is a long time local sailor with national racing experience. He grew up on CC Bay which became more evident to all as he spoke knowingly of the wind shifts, currents and other characteristics of the bay. Some anonymous pizza donor fed the whole crowd. 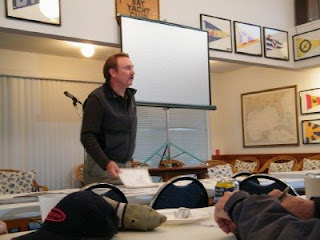 Freddie began by showing a short video clip followed up by a very casual talk on some general sail trim strategies for sailing on our bay. He said things that, once put into words, everyone in the room was thinking "yeah... that makes sense." His talk became more customized to our situation as people began to ask questions. Our bunch is very relaxed about racing. There are no cut-throats here. Freddie explained some very basic ideas that will help us all in our racing for fun. All were enthralled. 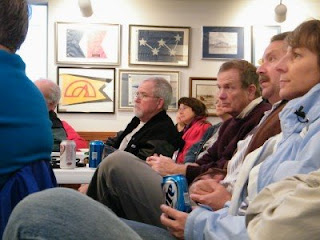 I have never sailed with a more natural teacher than Freddie. Every time I've had the opportunity to sail with him, he was always calm, quiet and steady in all situations. His methods are especially appreciated by the female sector. 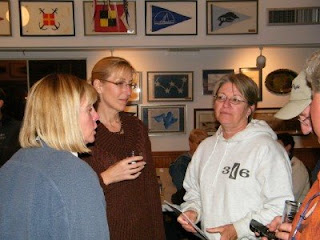 Afterwards, there was an opportunity for some one-on-one question time. Then Freddie left and the group circled around to discuss the things he had said and apply his ideas to our own type of racing. We enjoyed visiting with Steve and Ann ,who don't race, but are always happy to get some tips on making their boat go faster. They are relatively new catamaran owners who have switched over from monohull, and are still in the learning stages. Fred is such a natural that even us women seemed to get it. 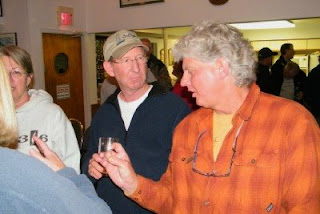 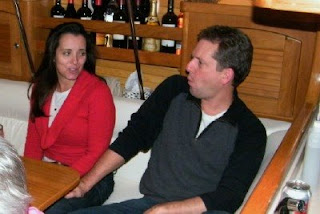 When we had exhausted all angles of discussion, Bruce and I joined Mark and Brenda on Seaflight for our second dinner... Brenda had made a very good pasta/shrimp dish for their weekend guests, Matt & Christine, from Austin. After we ate, Brenda brought out a game of Apples to Apples, which we played well into the night. It was hilarious until we began to go through the cards a second time.

We called it quits when Mark announced the time. I could not believe it. I had to get proof for my kids. I almost called them on the phone to see if they were still up! You might think that this picture looks fuzzy... well now it does... but at the time, after 3 bottles of wine, it seemed fine. 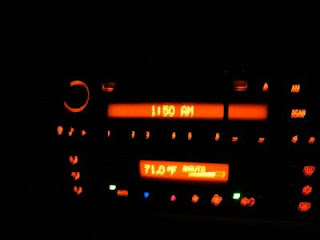