Thursday morning we woke up late... nearly 7 a.m. As we sat in the saloon drinking coffee, I started thinking that maybe I had not left the cats enough dry food. We had originally planned to sleep at the house on Wednesday night after the race and feed them then, but since we didn't race... So, we dashed home (in our jammies) and did some more things at the house. We assembled the bench in the atrium. I think it turned out great myself. Now if we can just find a seat cushion that goes with my color scheme! 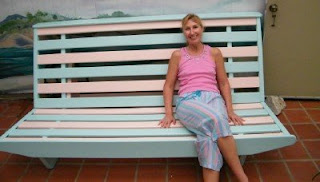 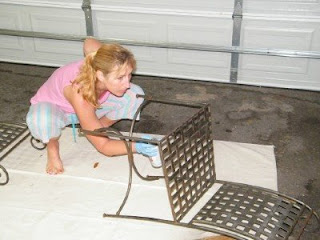 The next project to finish was spray painting the metal chairs that go with the little table in the atrium. I hate spray
painting! My index finger hurt for days after doing these two chairs. You should have seen all of the faintly black overspray on the garage floor outside of the drop cloth. I know that stuff is on everything in the garage! Once every year or two, we grind off the rust and re-paint these chairs with Rustoleum. It was long overdue.

We fed the cats, took showers and went back to the boat sometime after lunch. There was a lot of wind and it was cloudy. 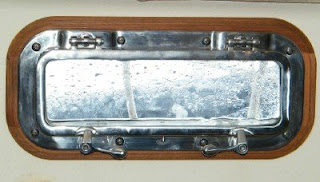 I was sitting on the deck reading my book while Bruce puttered... when I noticed that there were some rather ominous dark clouds building towards the north. I asked Bruce if he had zipped the window on the Beater... he ran off do do it. We began putting things inside as it looked like it was really going to get us this time. We went inside and listened to the NOAA radio. Wow! A bad cell was moving in a line from Cabiness Field to PI Country Club which included a direct hit on my office and basically... our home. Darn it! The car was parked outside and they predicted hail. We had left a couple of windows open a bit too! Bruce said "no way we're going to drive back into that"... so we sat tight hoping for the best. At exactly 4:45 (when NOAA said it would hit the island) we began to have huge raindrops. We sat huddled inside watching it from the port light windows. 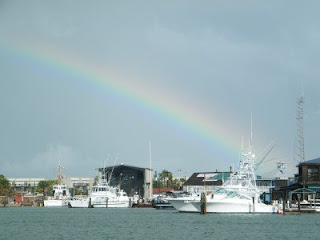 After about 20 minutes, it stopped raining and cleared... out came the sun and a fabulous rainbow out to the northeast. It was definately worth waiting around for. We came creeping out of the cabin and started looking around.

Bruce went out to see if the Beater had leaked any and found that the drivers side door had blown open. (It must not have been completely closed when he left it) 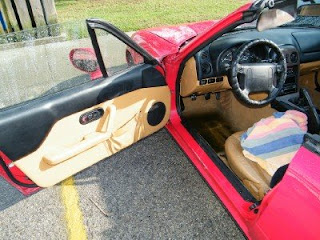 There was about an inch of rain water in the drivers side floorboard. We bailed it out and dried it as well as we could. By this time the North wind was really kicking it up providing a blow-drying effect. I told him to relax... I didn't think they made convertibles with much resistance to being rained on. It turned out fine once we got it dried out and the carpet is now much cleaner! 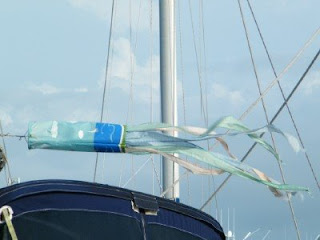 The rest of our evening was spent relaxing on the deck drinking our favorite beverages and reading. It was beautiful except that this wind was beginning to wear on our nerves