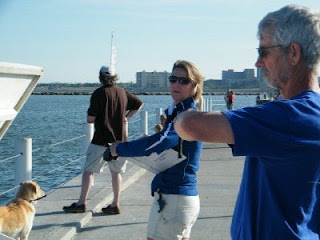 Bruce and I had Race Committee Duty for Elan this Wednesday night. Jacquie joined us while Steve opted for sailing with a pickup crew. We met down at the MORF box and found a vehicle from Canada parked in the Committee parking spot. I asked the man nicely if he would mind moving as we had a race to run. He said "Oh, you mean you're the race committee?". Ahh, a sailor from afar. He moved and after we got set up, I asked him if he would like to help as, obviously, he was a sailor. He declined but his wife, Rose, joined us. 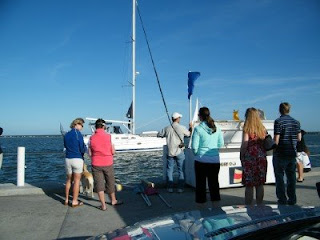 Bruce chose 2 courses, one for the all sails fleet and another for working sails. There was a brisk wind so he sent the all sails boats out to marker #4... the working sails were sent to #19... a much shorter course. Chip showed up to help with the start flags. We had lots of spectators out on such a fine night and many boats as well.

Once the race was started, we realized that we hadn't seen Steve on Cute Shoes make his start. We honked once at 5:59 as a warning then began the race at 6:00 with the white flag beginning the sequence. After all of the boats had their starts, 4 in all, we chatted for a while with other boaters, then we started our dinner. 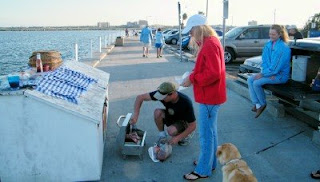 We had brought out our new grill and some fajitas to cook. I set up a gingham cloth and laid out all of the goodies. Some stoner guy from the crew of Wasabi (I guess he missed the boat) made himself at home and took over the grilling. Jacquie brought some home made peanut butter cookies...yummm! We shared our bounty with all who came.

We entertained ourselves eating, chatting and watching the stupid seagulls try to get a free meal off of the Brown Pelicans. 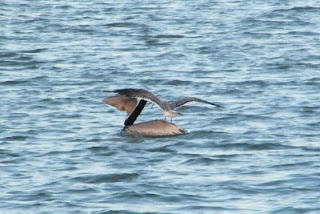 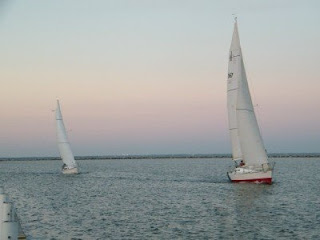 Finally the boats began to come back in. It was getting darker and chilly out there! 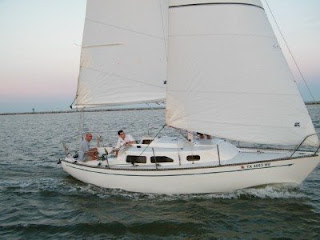 Steve came in and we had no idea why we didnt' see him start the race. Once he finished and put up his boat, he joined us at the box to wait for the final boat to come in. All became clear... he had started his watch at 4 minutes after the one minute warning, instead of at 5 minutes on the actual flag. This put him over early by 1 minute when we weren't watching for starters yet. I think one or two other boats did the same. We wrote down the start times in the book for those boats and left it to the officials to sort it out.