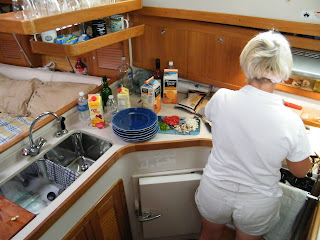 You might wonder what six people living on a 40 foot boat might do for days on end in a foreign port. I might wonder as well. Most of it is kind of a blur. The worrisome thing might be having three grown women in that small space... I'm proud to say that we worked well together and there was not one tuft of flying fur all week. We fell into a kind of system where each meal had a primary cook. Sometimes a secondary cook, as well. Then the cleanup was the responsibility of the third person with the help of the secondary cook. It worked quite well and naturally. 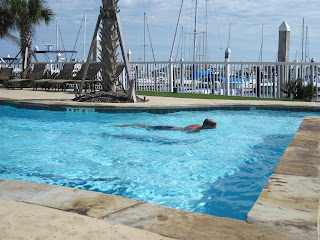 Bruce and I spent some time at the pool alone one day. He did laps while I sunbathed and read my book. I didn't get a picture for evidence to later use against him... but at some point in the swimming of laps, Bruce ditched his swimsuit. Something about causing too much drag... When I found out about it, I ordered him sternly to please put his clothes back on. Man... I can't take the boy anywhere!!! 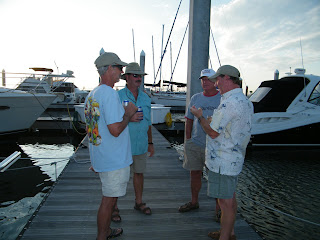 Evenings we had kind of an informal dock party with crew from Windswept, Susan II and others. The guys swapped stories and the girls gossipped. 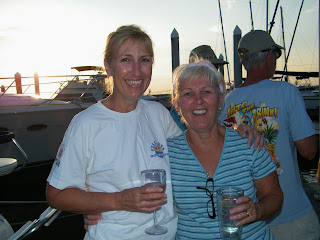 We hung out each evening until the mosquitoes drove us inside. The sunsets were always great!Don't say a word about how we look with no makeup and boathair! 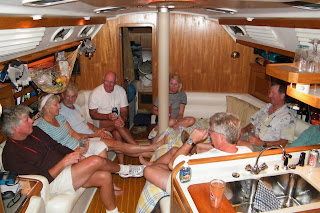 One evening we had company. Steve and Ann, who had recently left CC and now live aboard their catamaran in Kemah dropped by for dinner. It was so good to see them and find out how the move had gone for them. They're really a fun couple. 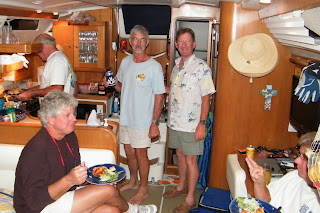 The dinner offering was my giant pan of home made lasagna and there was more than enough to go around. We all piled around and had a great time eating my delicious-if-I-say-so-myself creation. Thank goodness I brought a lot! 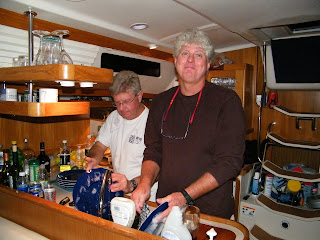 The cleanup crew got a lucky break. Steve insisted on doing the dishes for his supper. He got no objections from us! It warms my heart to see a big guy doing the housework. 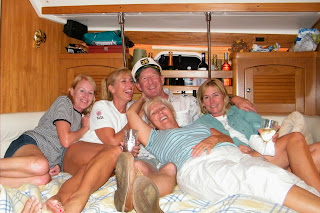 After our guests left, it got really crazy. We drank a bottle of 1921 (?) which is Tequila cream... yummy! Better than Baileys! Mark got to play out his Hugh Hefner fantasy. Don't worry... we're all too old and stuffy to really do anything strange. Obviously it wasn't too wild... my own husband is taking the pictures. 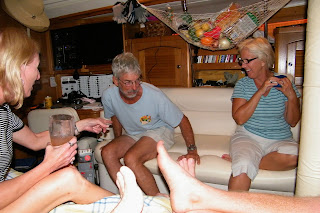 We came close to tripple divorce when Brenda brought out her "Catch Phrase" game. Of course the women's team was brilliant in the giving of clues and the quick answers. It did us little good however. The guys figured out quickly how to cheat the system and left us holding the buzzer every time. We played 5 games and the guys "won" 4 of them. They will pay for this transgression...

This video is proof of their treachery! 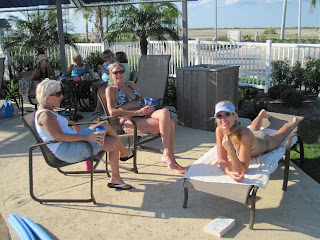 Wednesday afternoon, our crew met up with the Windswept people again. There were actually a few other people at our once private pool. I hadn't had much of a chance previously to get to know Lisa and we had a great little chat. 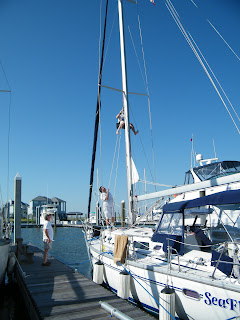 Last on the list of events was the installation of the new spinaker pole. Mark had scheduled these guys to come do the job and they came a day late... but oh well... what else did we have to do? They banged around getting the track onto the mast while we went about our business doing laundry and cleaning up around the boat. Even on the boat, a woman's work is never done.

Brenda's daughters came out for a visit and dinner. We ended up down below again due to the mosquitoe clouds. Our last crew member, Robert, arrived in the evening and that rounded out our stay. We went to bed early in preparation for race day.