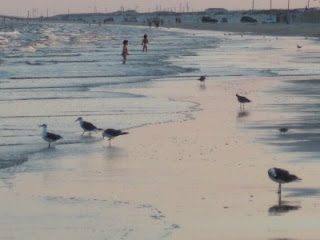 I had a good day today. After dinner I thought it would be nice to go out to the beach for a walk. It's been a while since we did and I've missed it. There were a few late summer hangers on out there, mostly just the birds... 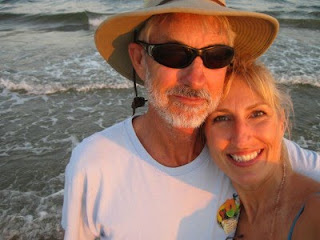 My poor husband had to pose for the obligatory self portrait. Hey, can I help it if I wish to remember all of these moments? He'll appreciate it some day. 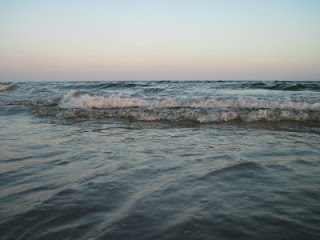 The thing I love about the beach is that it's always different... and yet, always the same. We had a summer of howling winds and now, for the last couple of weeks or so, they've been so light. It's a shame not to get out and enjoy the near calm. Today, I'ld say the surf report would say... surf, two rows at 6 inches! 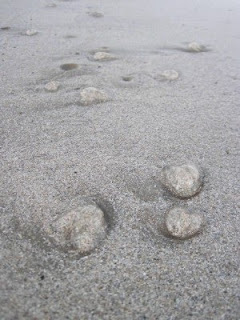 We walked along the water's edge until I found these little jellies washed up. They may not be going to get me... but I'm taking no chances. 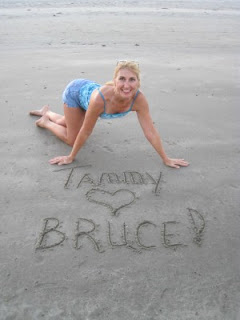 We played around in the sand for a bit. I made a sign for Bruce. He watched as I found a stick, began to scratch my name and a heart in the sand, then started on his name. He laughingly said, "Whew! I was hoping you weren't about to ask me... what was your name again?" Silly boy... who else would put up with me like he does? 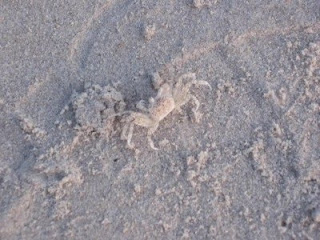 The sun disappeared and dusk deepened. Bruce had only sunglasses and can't see a thing without them so we turned back. As we walked back to the car through our familiar soft silky CC sand... the critters skittered about everywhere. It got so bad that I was freaking out a little bit. You could hardly miss stepping on them there were so many. I remembered another night when Bruce and I had first started dating a decade ago. He brought me to the beach at night on his motorcycle. We sat on a bench and the crabs were everywhere. I was trying to be cool but finally the "creepy factor" got to me and I asked him could we leave. He laughed. He said he didn't like it either but thought that I did. We took off. I prefer the beach in the daytime.