We arrived at the boat just about dusk on Friday evening. The mosquitoes were flocking around us as we threw our gear down below and dove in after it, slammed the hatch shut, and huddled fearfully in the cabin. So much for enjoying a nice sun downer. 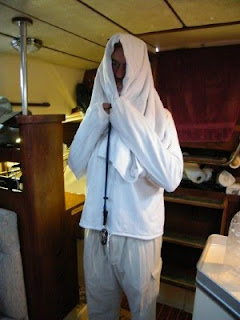 In the morning, we had our coffee in bed remembering the swarms of the night before and wishing to avoid a blood transfusion. Soon, however, it became necessary for us to venture outside our safe cocoon. I think Bruce went a bit overboard on the prep... don't you? 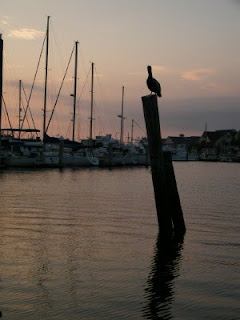 We were pleasantly surprised when we found that the coast was clear... and beautiful! 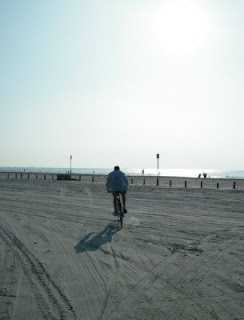 We had a quick leftover breakfast and got out the bicycles for a spin about town. We cycled through the streets in search of garage sales, but found none. We took the long way back by beach route. 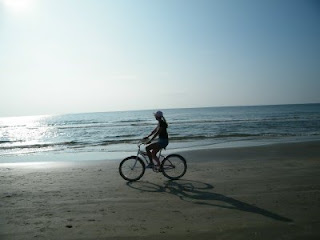 It's been quite some time since we rode on the beach and chased seagulls. 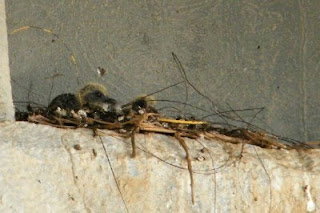 I think it's been about a year in fact. It was last hurricane season. I remember looking out over these same sparkling waves thinking about the storm surge and watching the waves crash under the pier. Here we are again, standing in the same place for a break. I looked up at the underside of the pier and saw these babies staring back at us. 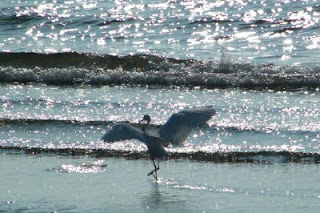 We rode on and stopped again to watch the Snowy Egrets do their dance. They peer into the water and find a fish, then they tip-toe-hop over while waiving their wings and jab their beaks into the water. Hopefully, they come up with a tasty fish for their troubles. 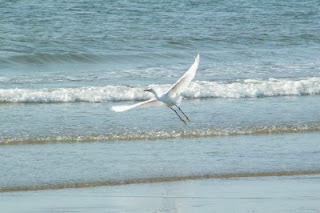 They are so beautiful. How do they stay so white? And why are their feet YELLOW? 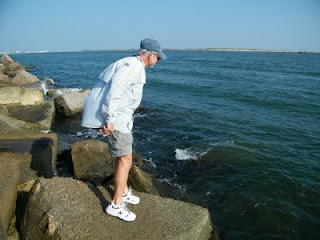 On we rode to the jetties. We parked the bikes and spent some time watching the world go by. There were turtles, and schools of little fish, and darker shadows of bigger fish below. 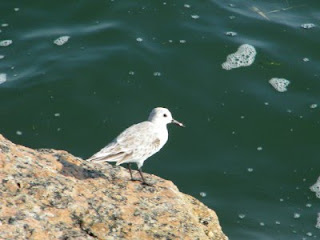 This little guy wasn't even shy. Unfort- unately he wasn't a good fisherman either. We never saw him get a bite. I think he was in the wrong place as he was the only one of his kind trying the jetty fishing method. 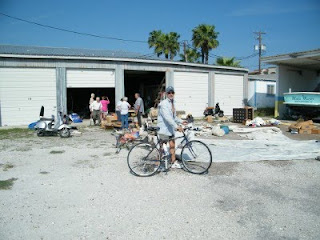 Time was pressing on so off we went. We did find one garage sale on our way back to the boat. I turned right into it and Bruce said it was like there was a magnet on my bike, drawing me in. Lucky for him, it turned out to be all guy stuff. He got a bag full of goodies for the boat for $10. 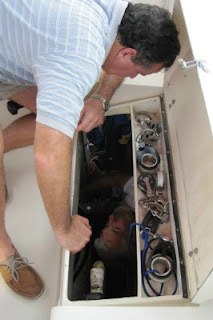 We got back to the boat and made ready to go out sailing. We had guests, Neil and Teresa were due to arrive for a nice afternoon sail. There was no wind when they got there so we chatted for a while until it filled in. We threw off the dock lines and began backing out of the slip when I heard that telltale sound of engine trouble. We pulled back in and Bruce got to work diagnosing the problem. Neil was a big help and we had it fixed in no time and took off again, this time with no trouble. 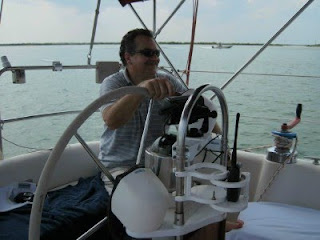 Neil was happy to be put behind the wheel. We had planned to go offshore, but with the shortened time and the winds not really cooperating, we opted for a few passes up the Lydia Ann Channel and back. 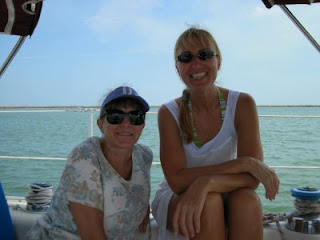 I was very happy with this arrange- ment and so, I think, was Teresa. I tend to get a bit woosey when the winds are light and the seas are sloshy. We had the most delightfully cool winds, even if they were a bit variable.

The big deal of the day was the dolphin show. They were out in droves and we saw several jump clear out of the water. Of course I didn't get the best part on the video, but this will have to do. 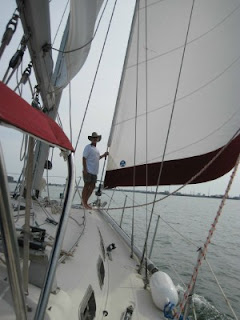 Finally the winds came up enough for Bruce to work on tweaking his new backstay adjuster. He's always gotta be doing something. But it was time for us to head back to the slip. We had one more thing on today's agenda. 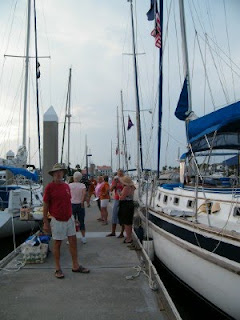 We had to clean up and dress for a BYC cruise to Island Moorings. We all took showers and drove over to the party with our pot luck offerings. 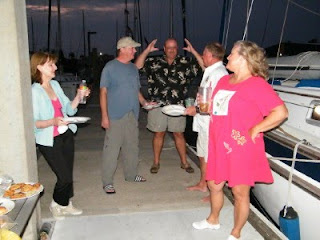 There were quite a few boats there from BYC and things were already hoppin'. We jumped right in and joined the fun.

After we finished grazing, many of the over nighters went down below on Honky Voodoo to watch some football game. I can't believe it! I thought I got into sailing to AVOID football! Here it has followed me in! 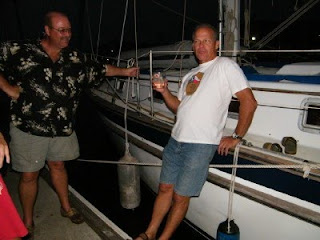 Those of us still healthy specimens and as yet un-afflicted by the dreaded "F-word" hung out on the dock. That is, until many of those drifted into the light and disappeared below decks to be absorbed. 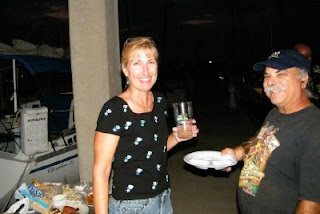 That left a sad few and Bruce and I decided it was time to head back to our own boat and bed. It had been... Just Another Shitty Day In Paradise!