Kick-Off to the long weekend... The Jetties at Port A 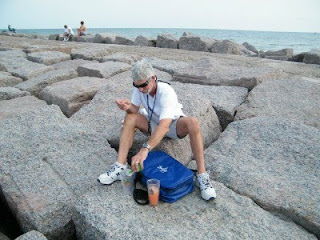 It had been a long brutal work week and the only thing that kept me going was the promise of the 3 day Labor Day weekend coming up. Bruce was packed and ready when I got off work and we took off for Port A. We packed a beverage bag and drove out to the Jetties to watch the start of the Sailboat race to Port Mansfield. 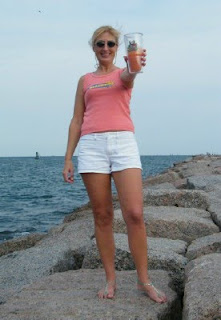 We parked ourselves on a rock and Bruce handed me a beverage as we began to quietly unwind and mentally transition to Island Time! 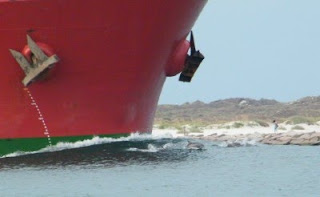 The Jetties never fail to entertain and this time was no different. The winds were down and the waters clear. We saw birds and turtles and the always thrilling... dolphins! We love to watch them speed along in front of the ships that transit the channel. I don't know how they do it.

We got quite a show... they leaped into the air just feet in front of the bow. Look at 'em go!

We watched as this ship made it's way out through the end of the jetties and suddenly we heard the five long blasts on his horn that signalled someone was in "eminent danger"! We realized it was a couple of the sailboats jockeying for position at the start of the race. It was thrilling to watch as they scrambled out of this guy's way. I'm sure the Captain of the ship was thinking (as usual) "Stupid sail boaters... more money than sense!

We had considered being a part of the Port Mansfield race as that is an offshore jaunt that we really have enjoyed in the past. But with the summer disappearing in a blur and the BYC cruise to Mud Island to do instead... we opted for the less stress inducing of the two... Mud Island here we come!