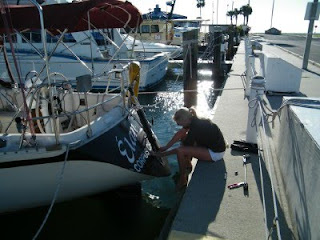 We spent the night on Elan in the CC Marina and awoke with a feeling of utter relaxation. We lazed around the deck and drank coffee enjoying the sights of our old stompin' grounds. All too soon, Bruce got us going on a project. Months previously, he had bought a new (to him) back stay adjuster from Bob, a BYC member who had upgraded in an insurance claim. He had this adjuster that Bruce thought would fit Elan nicely. After months of head scratching and part purchasing... he was ready to install it. I only had one small part in the process and got that out of the way. 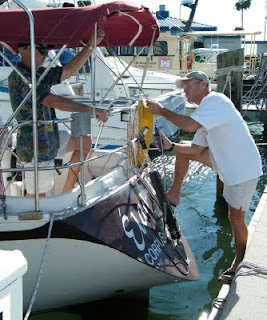 In come the big guns... Steve! He had practically built his own boat and Bruce had enlisted his help in doing this job. Steve brought his dremmel tool and after much measuring... cut the back stay. 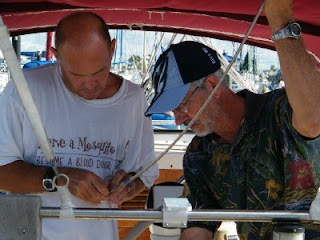 They worked together to install the new hymod fitting. I was amazed that such a simple fitting could be trusted to stay together with the incredible forces at work on the back stay. Especially with the hydraulic adjuster. 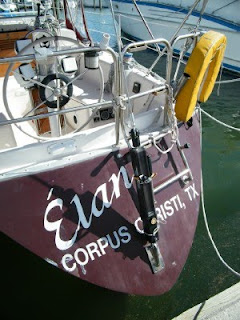 In no time, it was all done. It fit right in place with no trouble. Now Bruce can play with his new toy all the way across the bay.

We had a quick breakfast and tossed off the dock lines to be on our way. We very recently noticed that there are new wind generator turbines installed over Portland way. I love them already. They are so stately and mesmerizing. They just turn slowly... It's so good to see we are finally getting with it! 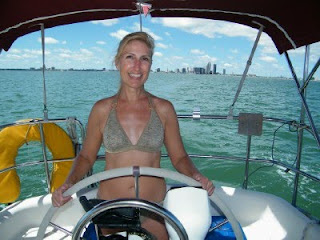 I took the helm for a good distance as we left our city of CC behind on this beautiful day. Bruce was happily adjusting things and playing with the new toy. 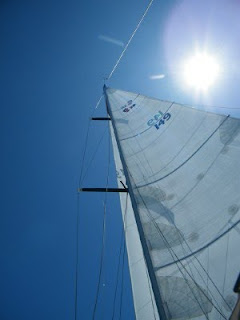 The day was such a gift! The humidity was down as it's been for a few days now, which makes it clear enough to see all across the bay. It sparkled! 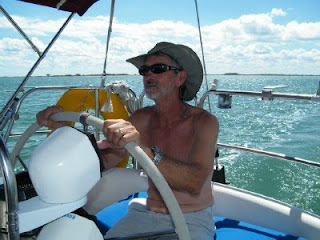 We enjoyed the sail across the bay and finally Bruce settled down enough to take the helm himself. This gave me time to do some much needed sunbathing. Most of this was done in the shade of the jib, but it's the thought that counts... bounding along, enjoying the light breeze and the green water and blue sky.

I roused myself enough once we entered the ship channel and began to motor, to take a quick clip of this Big Red Boat with his entourage. No matter how many times we see it, we're always thrilled at the joy these dolphin exhibit while leaping and plunging along in front of these giant ships.

We arrived at our slip shortly afterwards and hustled our stuff off the boat for the trip home. We had such an idealic weekend. After all the frenzy of the summer... it's nice to have the time to relax and enjoy our own beautiful habitat.