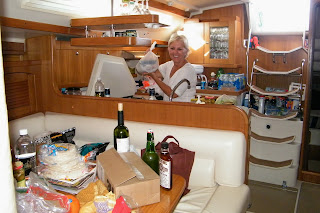 Bruce and I had such a great week last year aboard Sea Flight for the Annual Harvest Moon Regatta, we signed on for another this year. We had 3 couples on board this year for the journey to Galveston before the race. Finally, Saturday morning arrived and I dropped Bruce off at the CC Marina to help Mark sail the boat to Port Aransas. Brenda and I did the errands and bought provisions and met up with them to load the boat down. Doug and Sally met up with us there. 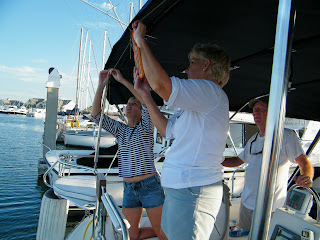 We were all busy loading our gear on board and making our little nests. Once the food and gear were stowed, we had one last thing to do. Brenda found a little "Happy Harvest" placard that we hung from the back of the boat in celebration of the Harvest Moon Regatta. I couldn't believe Mark let us put that thing up there but he was game. 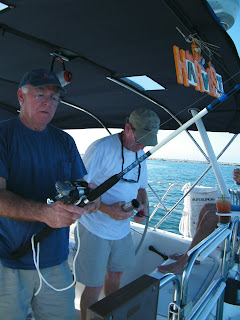 We all spent the night aboard and on Sunday morning early, we fueled up and headed for the jetties and the Gulf. Doug had the fishing gear out before we even cleared the end of the jetties. It would be many hours offshore with little to do until we reached our planned entry point into the ICW at Freeport, TX. Trolling a line would help pass the time. 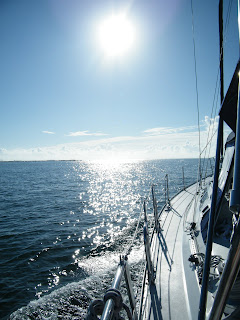 We cleared the jetties at about 9 am. It was a gorgeous morning with light winds. 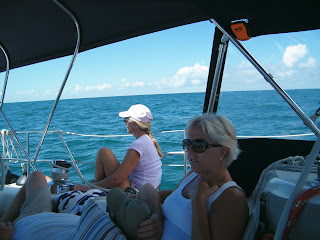 It's difficult to say what we did to entertain ourselves all that way. We were all using the Trans Derm Scope patch to avoid sea sickness except for Bruce. Maybe the patch causes a bit of a haze to descend upon us to help blur the passing of time... 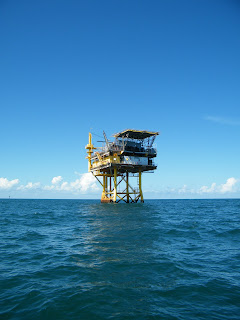 There are many oil platforms of different sizes and types littering the path from Port Aransas to
Galveston. We maintained a constant vigil as we motored along with the autopilot doing the navigating. We rolled out the sails a couple of times along the way but the winds were on our nose so it didn't do us any good. Our goal was to get to our destination as quickly as we could so sailing was optional. 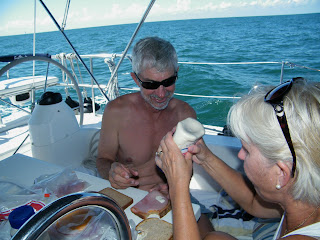 The big event of our day was dinner! We made sandwiches in the cockpit as the seas were bouncy and choppy the whole way. We had planned for this and didn't have any thoughts of sending someone down below to slave away in the kitchen. 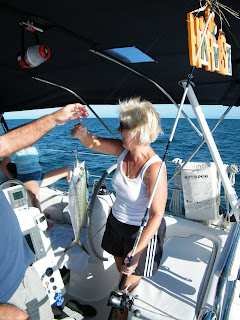 I missed a major event while I was down taking a nap. Luckily for me, Bruce got pictures. Brenda caught a Spanish Mackerel! I've never even seen one. Doug had rigged the trolling line with a little gold spoon. I didn't even know you could fish offshore with such a tiny little lure, but it worked! 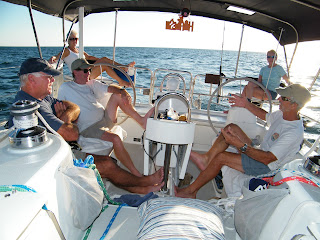 We all enjoyed the relaxation and telling stories as the sun began to drop lower in the sky. It had been a blissfully uneventful day on the Gulf. We began talking about how we would pass the night and who would team up for the watch schedule. 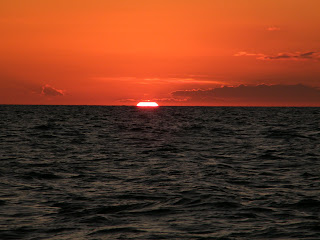 Mark divided us into two groups of 3 and it was decided that we would stand two and a half hour watches through the night. We watched the spectacular sunset with an uninterrupted view and began our rotation with Bruce, Brenda and I taking the first off time below.

The night passed in a blur of naps and time on deck. The moon was up lighting our way most of the time. It was indescribably beautiful as we looked behind us once to find our friends on Windswept sailing in the moonlight path on the water. Our radar provided the security of knowing what was in our forward path. There are some oil platforms with only a whistle to announce their presence... we passed two with no lighting or whistle. We were making good time... in fact, too good. We actually had to adjust our speed down to make our estimated time of arrival at the entrance to Freeport come at sunrise. Before we knew it, the sun was lighting the sky and we had arrived at our planned point of entry to the ICW. The channel markers were a welcome sight. We came in through the Freeport jetties with not Windswept, but Susan II on our stern. Sometime in the night, they had caught up to us and followed us in. 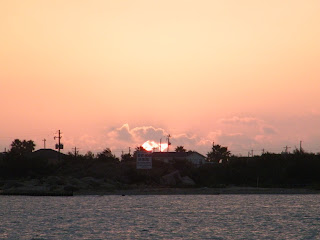 The sun broke the horizon as we neared the ICW. It was a new day and we had made our Gulf passage with no mishaps. 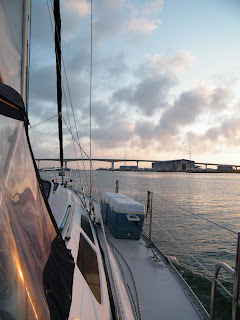 We turned into the ICW where we would motor the rest of the way to Harbor Walk.

This part of the journey was much more interesting than the Gulf passage. We had flat waters and civilization. 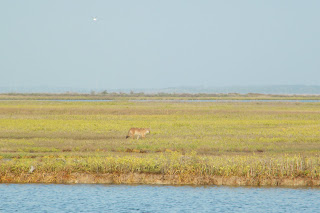 We also had the countryside with all the creatures going about their morning routines... A coyote... 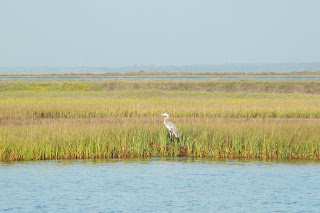 Many different types of birds... 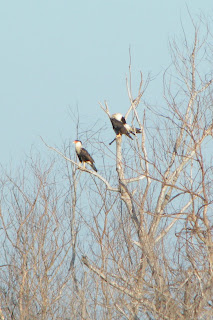 Too bad guys! We made it in alive! 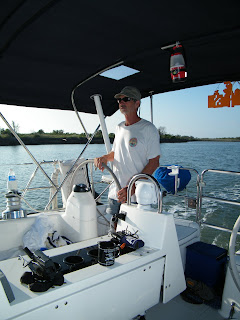 We took turns at the helm navigating the channel as everyone woke up and tossed off the Scopolomine patches. It would be smooth sailing from here on. 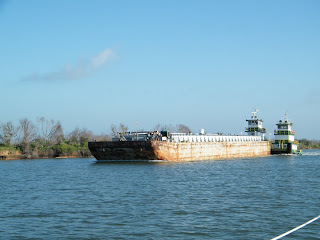 The main reason for doing the long trek out in the Gulf was to avoid the barge traffic in the ICW, which would cause us to go much slower. The trip would have taken two or three days. As it was, the trip from Freeport to our destination took about five hours. 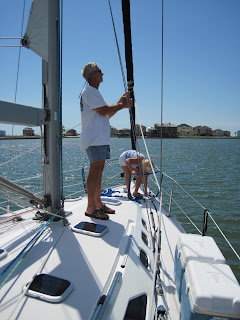 We arrived at Harbor Walk Marina after 1pm. We fueled up and found our slip which would be home for the next few days. 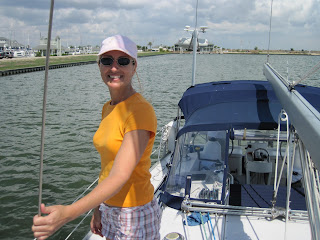 It was a relief to be here and let the fun begin! 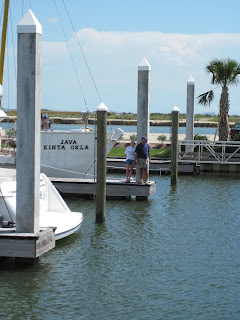 We had a reservation for a spot right behind another familiar boat... Ruthless. They have a permanent slip here where they spend about half their time split between here and Corpus Christi. Must be nice! Doug and Patty had walked over to handle the lines as we docked. Could be they were just ready to be on dry land for a while! 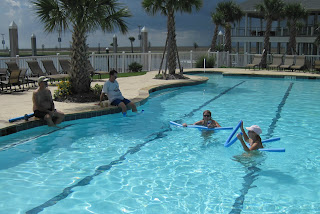 Hooray! Time to hit the pool! Bruce and I went over and joined the crew from Windswept in the beautiful pool at Harbor Walk. We were living in luxury and had it all to ourselves. This place was a ghost town. I don't know where all of the people who keep this place in business were, but I was glad of their absence. It was our own private playground. 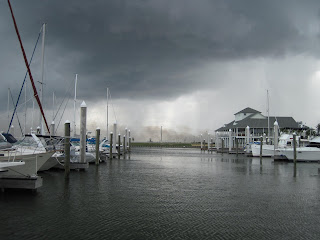 We lazed at the pool until the lowering clouds and lightning drove us back to the boat. We were glad it waited until we were safely tied up at the dock before the sky came down. We rolled out the cockpit enclosure and hit our bunks to sleep in our cozy cocoon while the rains came. What perfect luxury! 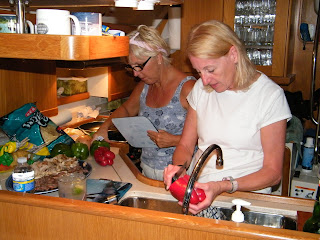 We awoke to dry skies and made a wonderful dinner courtesy of Patty and Doug... fajita chicken and beef. Each couple had brought the main course for a meal and we would eat well this trip. 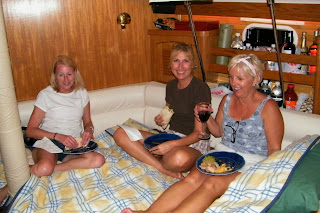 We piled onto Doug and Patty's bed and ate. It was one long slumber party and we were getting geared up for a week of fun! We drank a lot and gossiped on the docks until the mosquitoes drove us to bed.