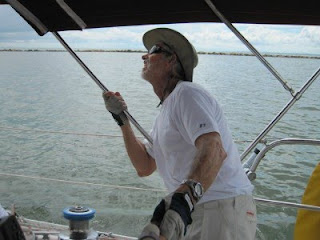 Bruce and Lyn brought Elan over from Port A to the CC Marina on Friday so that we could enter the seventh race in the Saturday Series. Due to travels we hadn't been able to make many of the races so this was pretty high on Bruce's list of things to do. We had forecast widely scattered thunderstorms. Due to the recent lack of rain, we didn't dare to hope for sunshine. We didn't get much sun but somehow, we didn't get rain either. 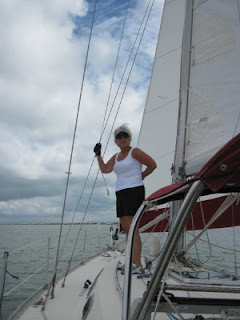 Bruce had been rounding up crew for quite some time and it paid off! We had Clay and Krystal, Mark and Brenda, and Steve & Jacque all turn up for the day. The other boats weren't as well represented as we were so Bruce was talked into letting Steve and Jacque go off to crew for another boat. They ended up with Walt on Still Dreamin'. To show there were no grudges, I even sent lunch along with them. Bruce rearranged his crew assignments and we were off with Brenda on the foredeck. She has a talent for not falling overboard that I do not possess. 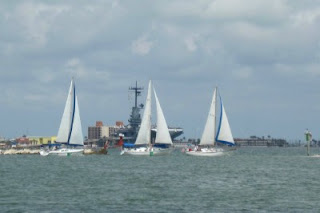 The race was a persuit start, which means that boats are handi- capped at the start so that we all converge at the finish together. It's much more fun that way. If you pass a boat, you know that you've beaten that boat. No waiting for the results. There were 6 boats in total with 3 starting before us. We got a favorable wind shift while still inside the gap. The three boats in front of us had to make more tacks than we did, which helped us gain ground early. Here they are going out the gap together just after our start. It's always tricky in shifting winds from the Northwest. The gap can be trecherous but no mishaps today. We had no close boats as we sailed out through the gap in persuit of these three. 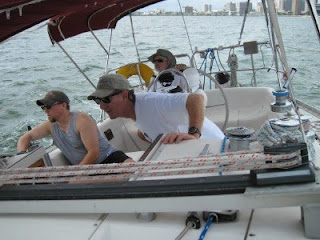 The first mark was #10. Our crew was dialed in and focused. We slowly made up the distance between us and them. 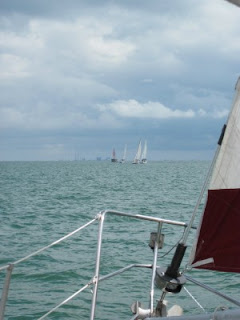 This was the view from behind when they began to reach the first mark. 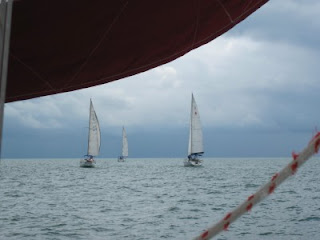 And this was the view as we made our way towards #4, the second mark. Big Difference! 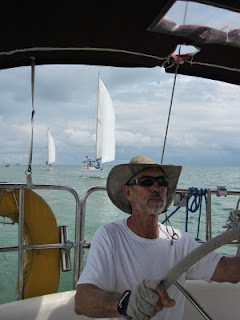 We really heated it up and began picking off boats one by one. We walked right over them all. By the time we reached #4, we had only one boat to catch... Still Dreamin'. This is a sight Bruce loves to see. 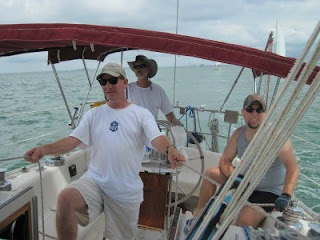 We made the turn towards marker #5, a large drilling platform out near the middle of the bay. The crew was humming right along. Everyone knew their job by now and all of our tacks were perfect. We wasted no time and had made no bad calls. 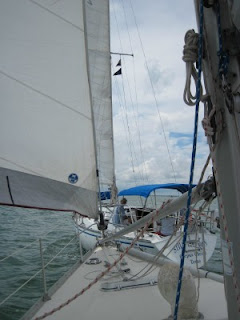 We quickly crowded Walt, Steve and Jacque and there were a few tense moments as they tried to keep us from passing. It always makes me nervous for sailboats to get this close. It's a game of "chicken". 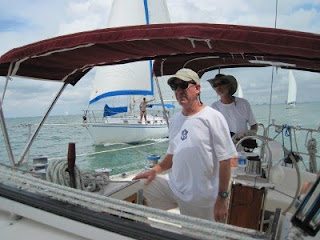 But we got around them and left them in our dirt. It was smooth sailing to the final mark before the home stretch. 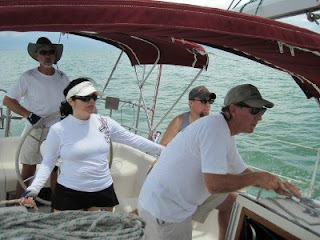 We had all the room at the rounding that we needed... had it all to ourselves but remained focused. We could afford no mistakes now! 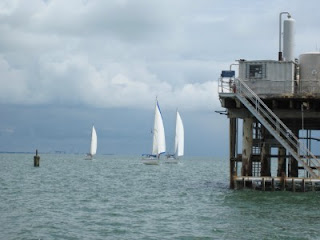 We did afford ourselves the luxury of looking back to see the others converge on the mark. There were more tense moments there but we were long gone. 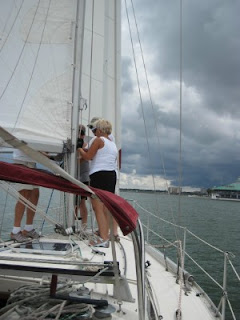 Once we neared the gap, the winds began to shift and die. We had to do an extra tack to make it through the gap. The boats were coming closer. We made it inside and turned towards the finish line. It looked like the skies would open up! Dark clouds were everywhere angrily staring us down. We were oinking along and would not normally make a major sail adjustment at this stage in the game. But our crew voted to see what poling out the headsail would do for us. They got busy on the foredeck and got it done in record time... What teamwork! It bought us just over a knot in speed.

We settled in to float over the finish line with the race committee yelling to us asking what we put in our Wheaties! We had done it! We won First Place! Bruce was so excited as were we all. I felt so good for him. He really needed this.

After we chatted with the other crews for a while... I admitted to Steve that the sandwhiches I had sent along with him and Jacquie were drugged and had helped us beat the pants off of 'em. We finally dragged ourselves away to go back to Elan for a bit of down time. 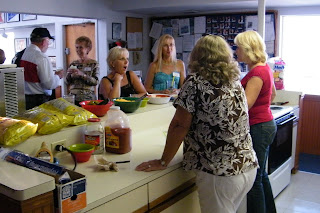 Our crew disbursed and only Mark and Brenda came back to the club later for the dinner and awards. It was Lyn's birthday. What a bummer that his boat, Susan II finished a dismal last place. The dinners after a race are always the most fun. Everyone who was there relives the details, those who were not, are usually all ears to see how it went. 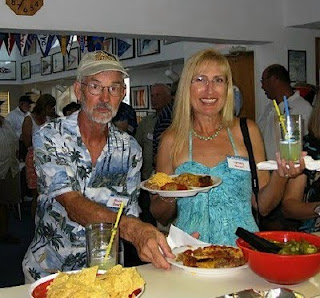 The dinner was delicious. Lyn and Susan served enchiladas and all the fixins, including margaritas! It was all delicious and the portions were huge! Thanks for the goodies... 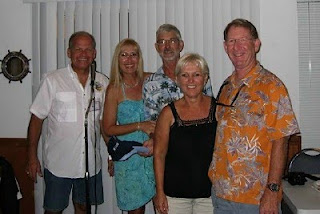 I have our friend Johnny to thank for sharing his pictures of the awards. Bruce and I were in them so didn't get any pics of our own. Here we are with the Commodore, Walt (second to last place on Still Dreamin') And he was still gracious in presenting the prizes. Bruce got a cool hat donated by Joe's Crab Shack, who are the sponsors for the year long race series. Thanks to Joe's! 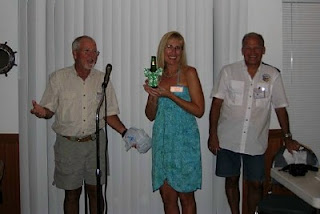 Next were the belated awards for the previous weekend's hermit crab races. I got a 3rd place

"trophy" which consisted of an ice cold bottle of Dos XX beer with a hawaiian shirt coozie! Thanks again Johnny! I'll treasure it always... 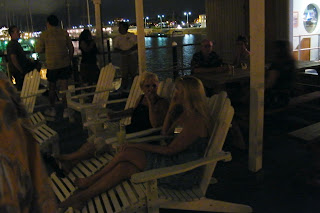 After dinner, many of us retired to the Adirondack chairs on the BYC porch to watch the lightning show and chat. It was so cool and wonderful out there with good friends. 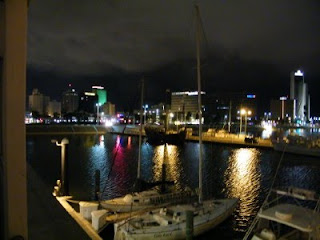 We thought we were finally going to get the promised thunder- storms, but got only a few sprinkles that did nothing to dampen spirits. Bruce finally dragged me back to the boat at about 10:30 pm. We may not be closing the house down, but we're getting closer. Thanks to all our wonderful friends who crewed and helped make Bruce a happy man today!