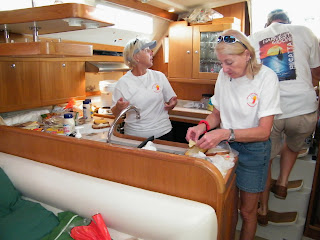 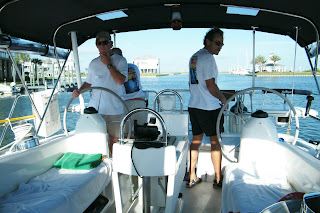 We left the slip at Harbor Walk by 9am and motored out into the ICW for the trek to the start line outside of the Galveston jetties. We were all excited but there was some nervousness too due to the norther' we would get... probably about Friday afternoon. Although we hoped we would be in by then, there were no promises. 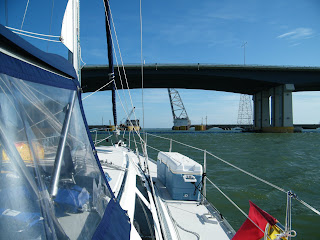 The only excitement, if you can call it that, was the always seemingly tight squeeze under the bridge over the ICW. 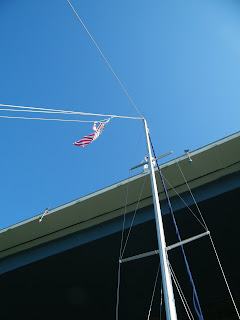 It's always disconcerting to look up and see the top of the mast so close to concrete. 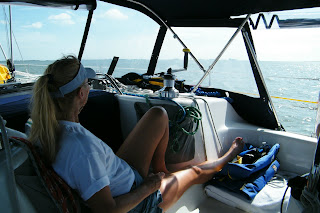 There was a lot of time to contemplate what lies ahead while we made our way out through the ship channel. I was optomistic. Most of the wind forecasts called for 10 to 15 which might not get us to Port A as quickly as we sailed last year, but we could make up some time when the winds shifted to the North later on Friday.
We were in the lead as we reached the start area. It is always amazing to look back and see the field of sails stretched out behind us. There were about 207 boats in this year's race. The camera does not do it justice. 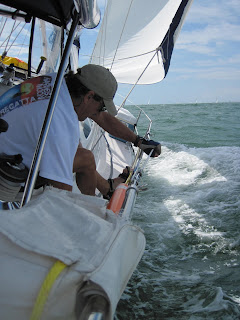 We sailed around the start area testing the winds and deciding what would be the best tack to begin the race with. The crew worked hard. 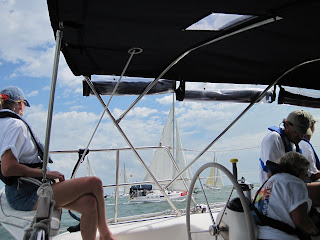 We made a brilliant start. We were right there with only a few other boats out of the 40 or so that should have been competing for our spot. We were off and running. We began our watch schedule before sundown. Some slept while others manned the helm. This time, there would be no autopilot. We stayed in good position with only a few boats in front of us for a long time. We did begin to see the boats with the expensive racing sails come up from behind. They had started well after us, but were making it up slowly. We had our sandwiches and watched the sun go down, the moon was already up lighting our way. We rotated through our watches. I tried to sail for speed, of course... I had a good time catching up to a boat that was near us in the night on my turn at the helm. We gained on them for a while... then dropped back later and they disappeared in the dark. Other boats ghosted across our bow with only their lights to announce their presence. We had radar but it was difficult to use in the bouncy seas. You really had to watch it to make sure you didn't miss something out there. With the moonlight, it was better to just keep a lookout.
While I was at the helm on our second watch of the night, we saw lightning on shore and wondered if it was related to the norther' we would be getting later on. Well as forecasts are sometimes wont to do... this one was off by a few hours. Suddenly the boat was rounded up. The winds had changed in an instant and were gusting to 30 kts. Sails were flapping the boat was tossing. Bruce called all hands on deck. It all passed in a blur. I tried to keep the nose to the wind while they firled the sails to reef. I couldn't control the boat, I was in irons... I had no steerage. Mark made the call to start the engine and our race was ended. We used the engine to position us so that the sails could be organized and when it was over, it was believed that the jib was torn. The boom was pressing upon the bimini so hard that it bent it in. The rains came and we all donned our foul weather gear and sat through it in silence. 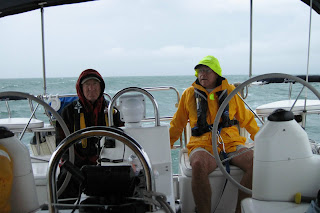 When daylight came... we were a somber bunch... 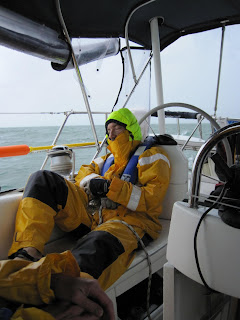 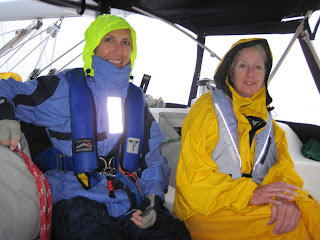 Wet... wondering if there was something we could have done differently to keep from having to start the engine and withdraw from the race...
It would all have been different if the winds had changed in daylight. But that was our draw.
After daylight, the guys realized that the jib was not ripped after all. The main wasn't working right because the toppinglift had slacked and wrapped around the flat halyard. This was all righted and the bimini that was crushed... popped right back to it's proper shape, allowing us to lower the enclosures to keep out the rain. But it was too late... we were no longer racing. 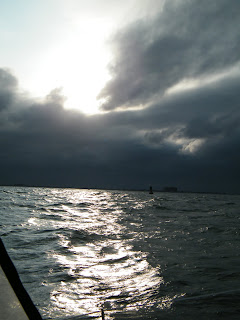 We cranked up the engine to speed us towards Port A and turned on the autopilot. No reason to man the helm now. Daylight came and rolled on to afternoon. 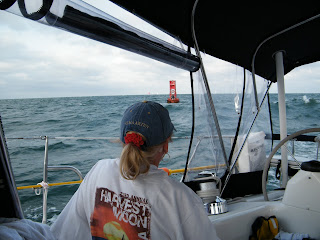 We were glad to see the channel bouys. We were home! 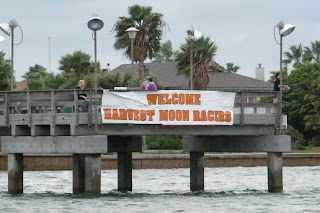 We motored into the CC Ship channel and found one more injustice... the slip we thought was ours... had been let to another boat and we had to go down to the new slips way far from all the fun. Oh well... this just wasn't our year. I had wondered if it was a good idea to try this race two years in a row and expect good results so soon again. It was tempting fate. But we all came though well and happy and no damage done. There were 40 or so boats that retired to Matagorda with damage and illness. We were happy that our experience had been only an adventure.