Laundry Out the Window 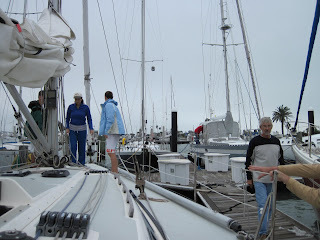 Rainy Sunday... perfect for doing the laundry and making a nice big pot of chicken soup... right? Yes! But while we were at the grocery store buying ingredients, we got the phone call from our old friend John. Yes Yeda is here in town and did we want to join them on Wet Express for an afternoon sail. Now Bruce, for some reason even though we have recently spent an entire week on the water in a sailboat, has the feeling that he doesn't sail enough. So, laundry is out the window and we are off to the marina. 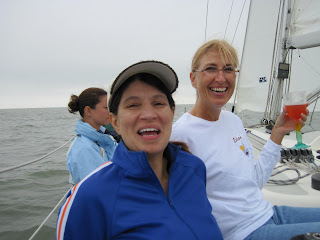 I guess it's nice to make hay while the sun shines, but today there was no sun. We set out in 72 degree temp with a brisk breeze and absolutely grey water. But, there was a lot to catch up with between Yeda and myself so I got with the program. 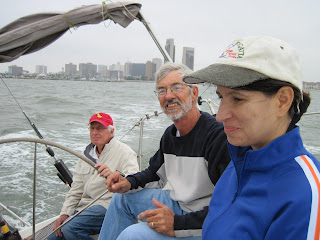 There were two other young couples on board today. Not John's usual raucous navy bunch but a very nice group. We left CC behind and enjoyed getting to know some new people. 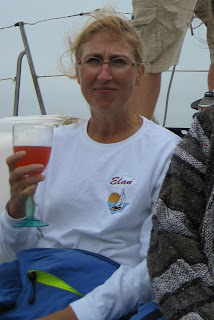 We had only just begun when it started to rain. I thought it was spray but when they turned the boat around to go back, the rain came down. I hid below until it let up a bit. By then, I had consumed about half a bottle of champagne so it didn't seem so bad.... 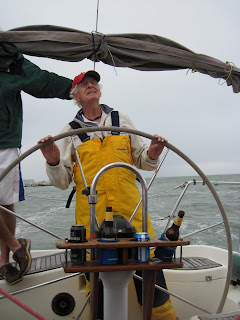 Not my usual thing by any means, but both Bruce and John were happy men. Bruce reminded me of some supposed promise I had made him on Saturday morning that if we didn't do the race and John called... we would go. Anyway... now I've got to rush to get the laundry done and get ready for another busy week.