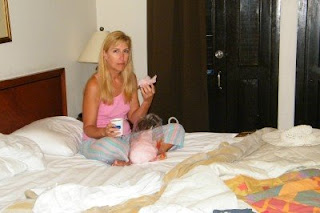 We woke up in the morning from a wonderful night's sleep. Bruce brought coffee from downstairs and I had my cotton candy and coffee in bed. 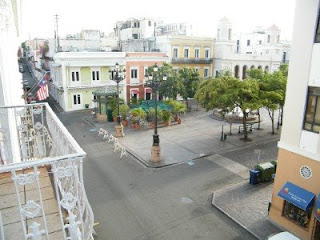 We began to stir and threw open our doors to the balcony for a look in the daylight. We had a wonderful view down onto the square. It was quiet and still. It was a beautiful morning after a fabulous night. 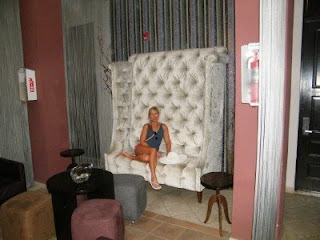 We used the water box and dressed for our day out. We joined the people downstairs in our hotel for a complementary breakfast. I tried to eat healthy since we had been such gluttons last night. This place is so very old and it is evidenced in the furniture pieces in the lobby. This thing just begs a girl to sit on it. I think it could double as some kind of futon. 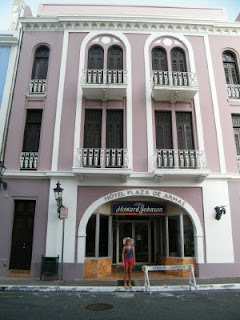 We set out on the town, getting our first look at Old San Juan in the daylight. That's our balcony second floor center left. 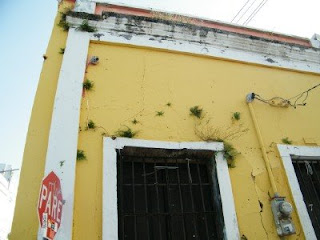 We strolled though the square marveling at all of the pastel colors of the cement front buildings. this one could use a face lift. It seems like most of the construction is of cement, I guess because of the tropical storms. It's very beautiful. 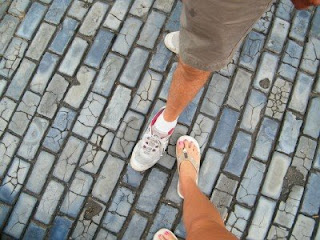 The streets are cobbled in blue ceramic fired brick. They make a marvelous sound when a car drives over them. 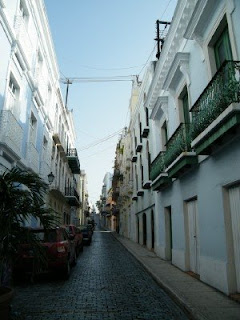 I can't imagine driving through these streets. They are so narrow. There is just enough room for the line of parked cars and inches between the mirrors when a car drives through. Kudos to the cabbies! 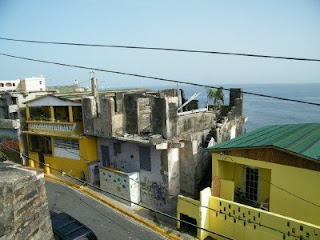 We turned towards the opposite side of the island from where we went last night. We had only a few blocks to go up the steep incline to where we burst out into the open sunlight and a sweeping view of the Atlantic ocean. Here I was amazed to see that the slums are built outside the walls of the fort. I can see that the poor would be outside back in the dark ages, but you would think that the rich would take over the prime waterfront property now. Not so. 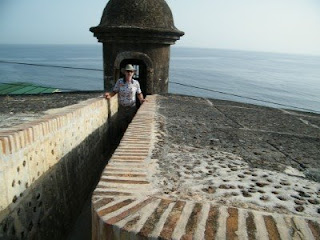 We took our time exploring all along the wall. The winds were almost calm and it was getting very warm. It was almost other-worldly. There were few people out. Bruce was lost in thoughts of how it must have been to defend this fort from enemies by sea. This wall is 15 feet thick in most places, sometimes more. It's amazing. 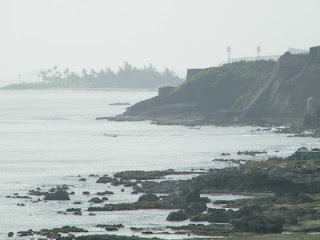 We wound our way along the wall with breathtaking views at our feet. The ocean seemed vast. 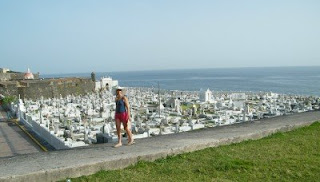 Before long, the slums disappeared and were replaced by a cemetery. Again it seemed strange to use the space outside the wall near the water's edge for a cemetery. It was certainly a beautiful final resting place. 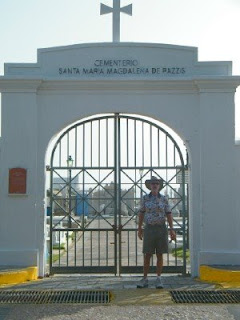 We found the tunnel through the wall that allowed us access on ground level with the cemetery. Sadly, it was not open to the public. So we poked around outside the gates and took what pictures we could of the amazing monuments inside. 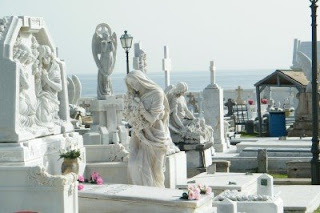 This one was a favorite. The carving was so detailed and intricate. I can almost imagine the figures coming to life and moving around. 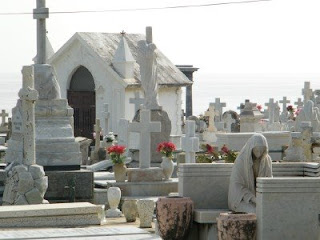 I wished we could get inside and walk around to see the dates on the gravestones. I love to poke around old cemeteries thinking of how the people must have lived and died. This place is so saturated with history, you can almost feel it. 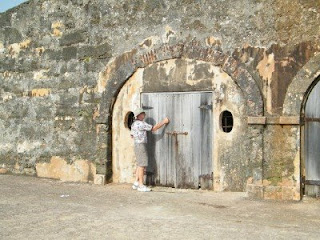 We continued on along the coast and came up on the beginning of the actual fort. Bruce thought this place was probably storage for munitions. It was just small boxlike rooms. 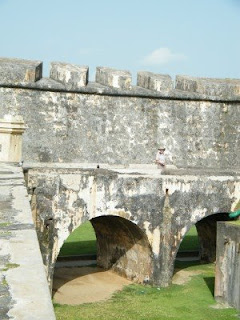 The main part of the fort had a bridge over what looked to me like it could have been a moat. Maybe it was just a pit where they kept the lions. Ok, no lions, but it's fun to think about it anyway. See Bruce is tiny on the bridge. 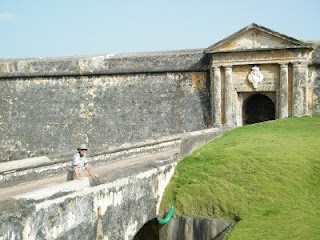 The door to the fort was closed when we arrived. It would be open in a half hour for tours. We waited a bit but decided that we needed to be on our way this trip. Next time we come back, we'll take the tour. 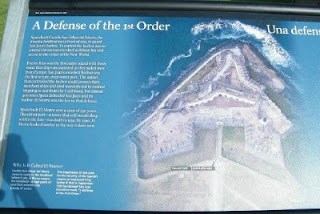 We did read a bit about it and Bruce's assumptions were correct. This point guarded the entrance to the channel that leads into the heart of their port. 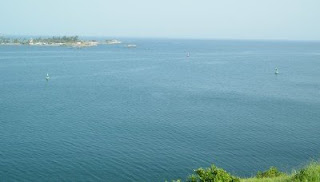 As we walked around to the other side, we could see the channel markers. 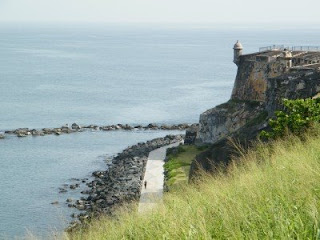 It was easy to see how this entrance could be defended from this vantage point. 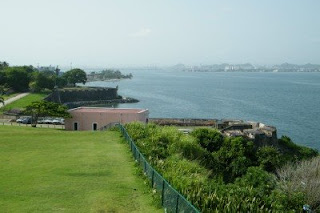 There were cannon pads on this side to catch those enemies that got this far. 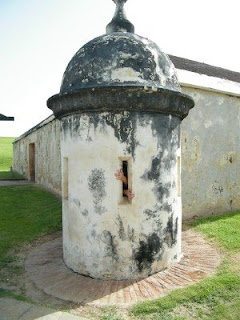 We had fun playing inside the cupolas. We could see down the channel to the main town area. This channel is used today for commerce and tourism. 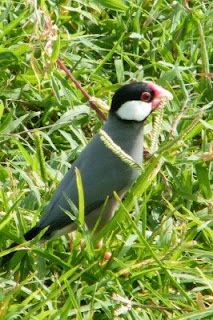 We walked across the vast lawn towards the street where we would wait to catch the trolley. There was a flock of these little birds there. Does anyone know what they are? 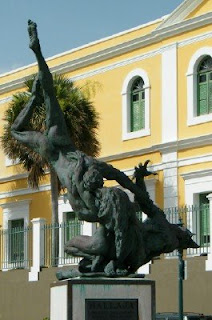 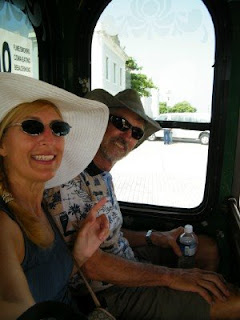 Before long, the free trolley came to stop for us. It's very nice to ride around the narrow streets in the comfort of the air conditioned trolley. They come around every 15 minutes and the loop takes about 45 minutes. We knew it would stop right in front of our hotel. We did the whole loop then got off at our square. 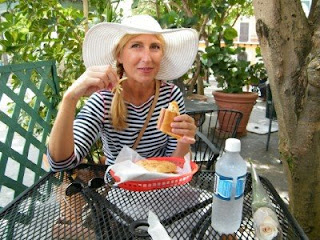 We just had time for a relaxed lunch before we had to collect our bags from the hotel and head for the airport. Bruce ordered sandwiches from a vendor in the square. We ate there in the shade as the gazillion pigeons watched us hungrily. 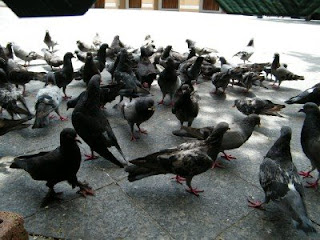 Bruce threw them some shoestring potatoes from his basket. They swarmed! It was fun to watch them go after our crumbs. 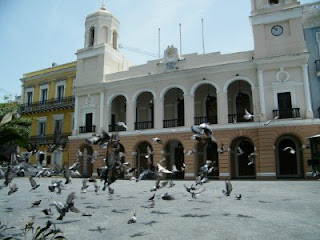 Someone walked by and scattered them but they came right back until all traces of our lunch were snatched up. 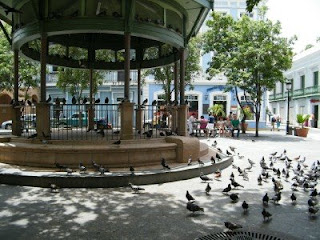 We did some shopping in the old buildings around the square. How much trouble could we get into in a drugstore? Well, I found a set of jewelry made of an unusual colored malachite. Bruce ended up buying it for me for our 5th anniversary which was coming up soon. I was so happy I cried. We said our fond goodbyes to Old San Juan and went away with very happy memories. We'll be back!