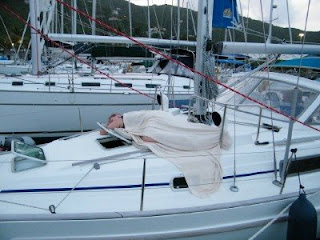 Melissa was found on the deck in the morning. We had arrived at the boat after dark, did a quick inventory of the provisioning from Ample Hamper and found it lacking, then took the taxi to Pussers in Road Town for our first dinner. We had great food and were all in a festive mood. Once back at the boat, we went right to bed. I guess Melissa was too hot to sleep inside as is sometimes the case when docked in a slip instead of being moored out on the water. 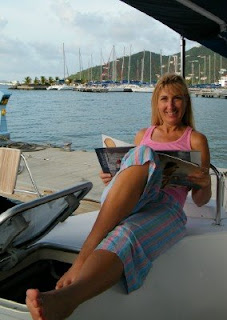 We had a leisurely morning with coffee and breakfast. We had to wait until the BVI Yacht Charters people got to work at 8am so that we could do our checkout procedures. The sun comes up at around 6 am here and we awoke with it. We had some time to kill. 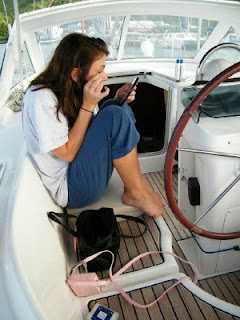 Brittney did her toilette in the cockpit. She adapted quickly to the conditions. 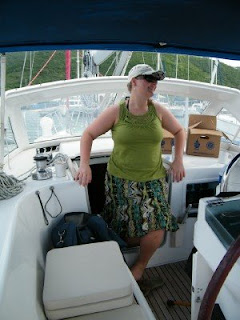 Melissa did hers down below and came up dressed for the day sporting her Scope patch to avoid sea sickness. She was all set! 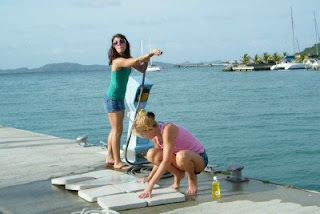 We did some cleaning up around the boat. The seat cushions had to be washed as they had been allowed to sour. Brittney threatened to hose me but thought better of it... 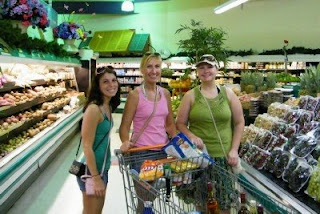 We had to work out our provisioning as the Ample Hamper delivery lacked about half of the things we ordered. Long story short, they confused the two weeks and ended up delivering the wrong stuff and we had to go over there twice to get them straightened out. Meanwhile, we had to shop at the Bobby's Market to fill in some of the gaps. 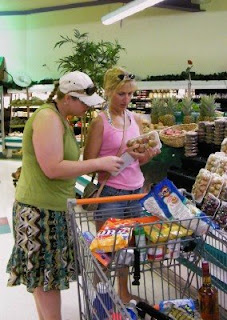 It was fun shopping with the girls anyway... What is this stuff? We bought some things we had never seen before and passed on many others. 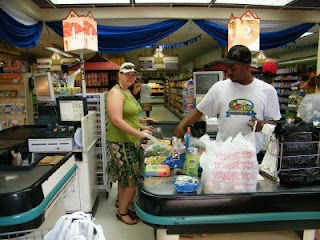 The girls tried to chat up the checkout guy but he obviously hadn't had his coffee yet. We found it a common theme with the locals working around town... they're all sooo tired! 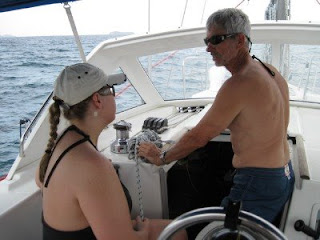 We found Bruce had finished with the orientation by the time we got back and did a quick checkout, then we were off. Bruce began the process of showing the girls how to work things on the boat. It was roller furling gib and in mast furling main so it was very easy. The girls picked it up fast. 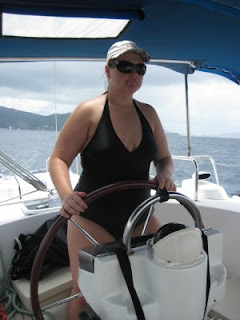 We had a nice sail over to Norman Island and the Bight, our first stop for the night. We found a mooring and set out in the dinghy to snorkel the Indians. 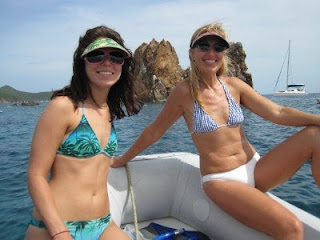 The Indians are a rock outcropping just outside the entrance to the Bight. They provide a home to many fishes and a place to dive and snorkel to many tourists. There are mooring balls there but it's rare to find one open. The dinghy ride was short enough and we tied up to the dinghy mooring just fine.

In we jumped. It didn't take the girls long to become secure in the water. It was a bit chilly and the visibility wasn't the best due the winds. 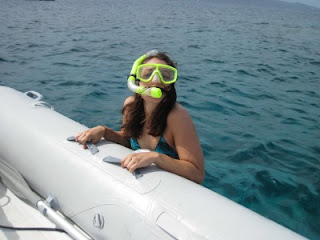 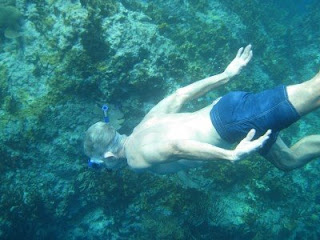 We spent about an hour poking around checking out the fishes on our first snorkel ling excursion for the week. There would be many more but the first one is always the best. I love the way the sea fans and things wave in the current. Also, check out the predator fish parting the schools of prey fish. It always fascinates me 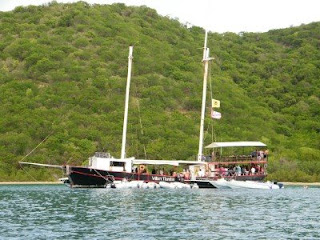 We snorkel led until we got cold then went back to the boat and rested and prepared for dinner ashore at the William Thornton... the Willie T. It is a schooner permanently parked in the Bight that serves as a bar and restaurant. There are many stories about the raucous things that go on there. We hoped that we were early enough to avoid the worst, but the kids were a bit intimidated by the rowdy locals there already. 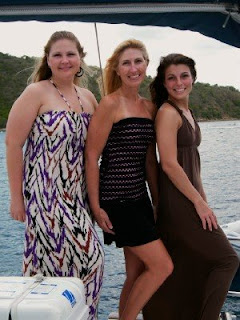 We donned our finery and took some pictures. It was so much fun having the girls there with us to play! 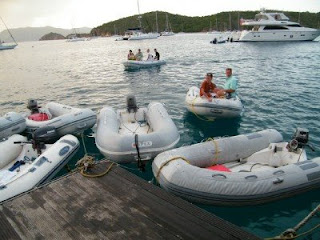 We joined the other dinghies at the dock on the Willie T and came aboard. We had dinghies to the left of us... and "dinghies" to the right... 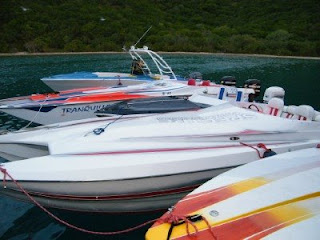 Generally speaking, as the night wears on, girls can be found taking off their tops and or bottoms and jumping off of the upper deck. We didn't see any of that this trip. 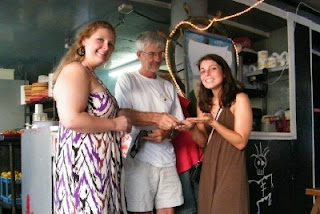 Bruce gave the girls some cash to brave the bar while he ordered our dinners. The place was jumpin' with many locals there on a Sunday night. 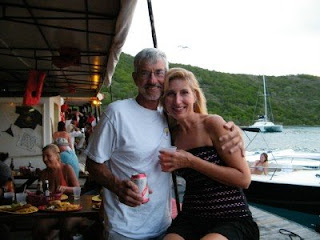 The food was great and the people watching even better. It was a bit overwhelming when we were looking to get away from people. We enjoyed our meal and a nice sunset. It had been a great start to our vacation. 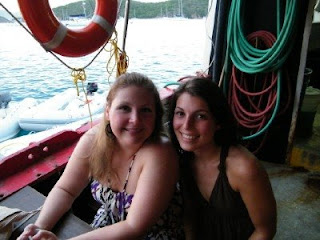