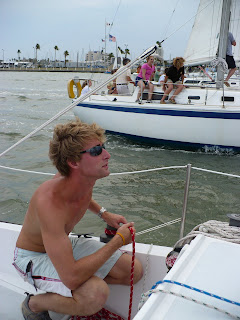 Somehow I've managed to delete most of the pictures from Wednesday night. And yes, I'm very thorough... even emptied the recycle bin. So anyway, I managed to save this one of my new future son-in-law. Bruce came out sailing this week. It was his first night out since he began having sciatica troubles and I was glad of it. It hasn't been the same without him.

Steve brought along a friend from work. Bret is a band director at Calallen. I thought he was a kid! He looks so young. I know what all of you old people out there are thinking so just stop it! Anyway, we all had a nice chat when Steve wasn't making us focus on the race start. We had a good one in spite of our inattention. There were a lot of boats out. The sun was shining when we got there but dark clouds had loomed on the horizon by the time the race got going. Once out of the gap we began to see lightning. Never a good thing while on a boat in the middle of wide open spaces with a huge metal pole sticking up.

The race course was an uncommonly lengthy one devised by Doug... a hard core sailor going soft in his old age (30s). He sent us out to #3, then to #19, then back in to #1 and out again to #10. Normally just the jaunt to #3 and back would be it. Bruce was on the cabin top as he was still being careful of his back. Only a week until vacation so we're taking no chances. This left Jacquie as foredeck and Bret and I in the cockpit with Steve. Bret was new so after a couple of rough tacks, I took charge and assigned duties. Once this was done, we got into a groove and the tacks got much better.

Bret seemed to be an intelligent young man with good social skills. I asked him if he had a girlfriend and looked over at Bruce to see that pained look all men have when women start asking such things. I confessed right off to Bret that "I have a daughter... but she's a psycho". He responded well with "I'm a band director, I can handle it". He's in!!! Just the perfect age for Brittney, a guy with good social skills and a job, but still enough of a kid to be fun for her. Way to go MOM. I found one!

Conversation moved on to something else but before long, Bret brought it back around. I had him hooked! We'll see what I can arrange, more on that in the future.

Well, it was a good thing we got our tacks down. The weather deteriorated. Some boats abandoned the race and went in due to the increasing lightning and darkening skys. We rounded the last mark and followed a boat towards the gap. The winds shifted and whipped up making it necessary to reef the mainsail. Jacquie did a phenominal job up there on the cabin top. It looked like we weren't going to make it in without a tack and the other boat had to tack as well. They did so right in our way and stalled. We managed to avoid them but things became a bit of a blur for me. All I know is that Steve kept yelling tack, tack now! Bret and I feverishly ran the lines as the boat went from one tack to another. When we got a chance to look up, we were just inside the gap and drifting towards the rocks and heaving to staboard. Steve yelled to blow the jib and drop it... we did. The boat righted up and we sailed a tack on the main alone. Then Steve ordered the jib back up... we were going to finish the race! And so we did, with a couple more tacks inside the calm waters of the gap, but with the wildly changing winds. It was a blast! Young Bret was thrilled and loved every minute of it. Steve has his crew!