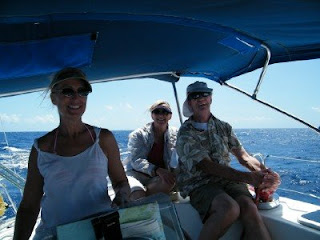 We left Anegada early. We had a long sail ahead of us and wanted to get underway. The sail from Anegada across to Yost Van Dyke should take us about 4 to 5 hours. We had good winds to start at around 14 to 15 kts. We had a great sail over punctuated by many sightings of flying fish. By the time we neared Tortola where we began to see winds gusting to 32kts. We made sail changes several times, first reefing, then letting out again. We made the decision to head for Cane Garden Bay instead of Diamond Cay between Yost and Little Yost due to the swells and winds we expected would make the anchorage rolly and miserable.

We hugged the Tortola coastline and had an opportunity to practice our Man Overboard skills when Jackie cried "I lost my hat!". In actuality, it was MY hat! My favorite viser with the flamingos on it. We had to go back. We made several passes at it when Bruce finally managed to snag it. That was close!! 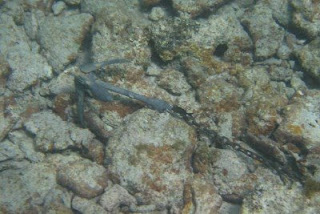 We made it safely in through the reef that protects the Cane Garden Bay mooring field and had our pick of the good ones. Once inside and out of the wind, it began to get hot. We took the dinghy over to near the protective reef and dropped anchor for some snorkeling. I was the first one in, as usual. We first grabbed a small mooring ball which I found unattached at the bottom. So Bruce threw out our tacky little anchor. It found a tentative hold on the rock bottom. You can just see the little black fishies that found our anchor to be a new found toy introduced to their world. 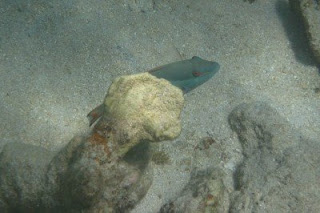 We are always enchanted by the different-ness of every place we snorkel. I played hide-and-seek with this colorful little guy. We both ended with the impression that we had won.... 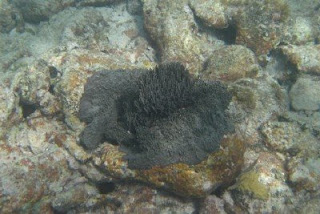 This black coral was something I can't remember having seen before. It seems to be creeping over the rock bottom and taking over. 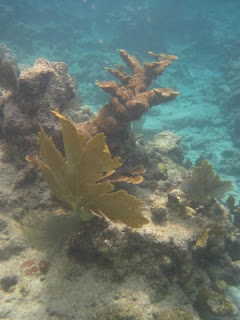 There were many sea-fans here waving gracefully with the current. The coral reef that nearly circles the anchorage was a beautiful backdrop.


We snorkeled until we got cold and an ominous looking cloud came over dropping some rain. We had left our windows open on the boat. Of course, by the time we got back there, the rain had passed. We spent some time relaxing and swimming around the boat with the rum drink of our choice. We rested up for a dinner out.

Bruce and I chose Myett's again. We had such a wonderful meal there the previous week, we figured... why mess with a good thing. We had the obligatory happy hour with the steel drum guys creating the tropical island ambiance we had come here for. I'm sure if you're keeping up with my blog... you'll recognise this picture. 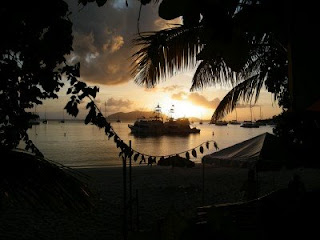 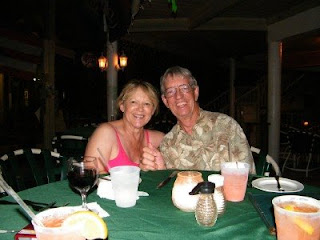 This week, they didn't take us around to see the food choices like they had the previous week. But it was still a great meal with good company. We drank up and enjoyed Bruce and Phil's stories of childhood things remembered. 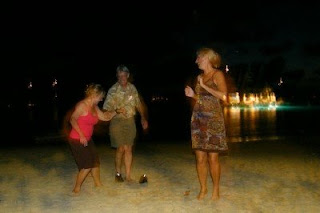 Before our dinner came, I decided it was once again, time to do some dancing on the beach. 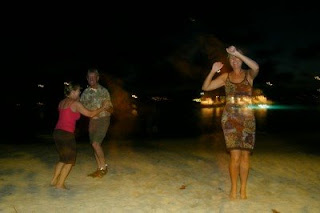 I didn't want to let the steel drum band get away before we had our chance to shake it! 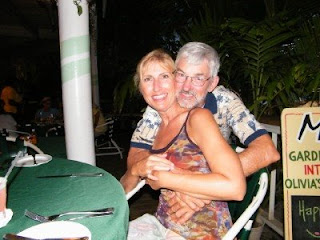 And thus, ended another day in Paradise!