BVI Vacation 2009 Getting There 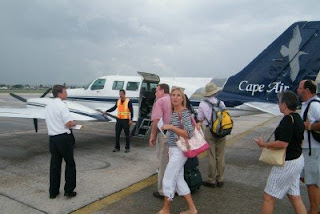 We finally made it! It's June 13th and we're on our way to the beautiful British Virgin Islands. This is my third time and Bruce's fifth... the kids are joining us for their first trip there. Our final leg on the journey was on a tiny little 9 seater with Cape Air. I was nervous about the little rust bucket but the pilot, Mike, was confidence inspiring. 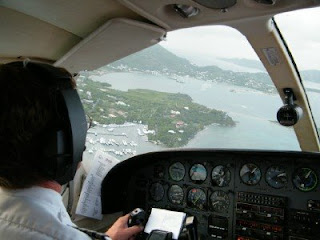 Bruce and I were in the first two seats behind the pilot. We could see everything. We were separated from the girls in the weight shuffle. They had to wait for the next plane which was to take off about 20 minutes behind us. I was so disappointed to be unable to experience this with them. It was fabulous and I would have loved to see them take it all in.

The takeoff was great after I got over my initial reservations about the whole small plane concept. The flight over to the islands was spectacular looking out through the windows. There wasn't much between us and the clouds. The cabin wasn't pressurized and it got very cool as we went up and up. It was very loud so conversation was impossible.

The landing strip on Tortola's Beef Island is painfully short. It ends in Trellis Bay. It's daunting considering the very small margin of error afforded by the little scrap of land as we hurdle towards it at a high rate of speed. Our pilot did a magnificent job of landing and we were all celebratory! We're HERE!