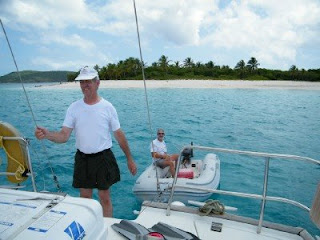 First stop after leaving Cane Garden Bay, was Sandy Cay. We had a great time here the previous week and hoped that Phil and Jackie would enjoy it as much. There were already several boats here when we arrived so we didn't get our pick of anchoring spots. We put it down once and dragged. We pulled it up and reset it and this time it held. 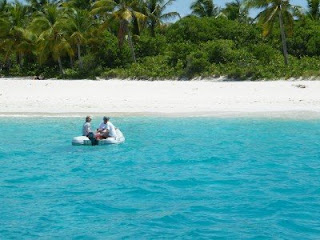 We were not trusting it so Bruce took Phil and Jackie ashore while I stayed on board with anchor watch duty. 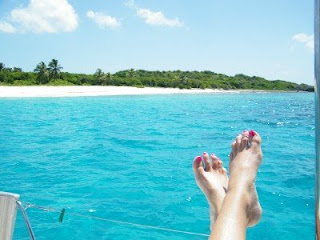 It was not so bad. I did some reading and sunbathing. The view was sublime, the sun was out, the wind was cooling... Ahhhh!!
Bruce left Phil and Jackie on the beach with the dinghy and swam back to the boat. His turn at anchor watch. 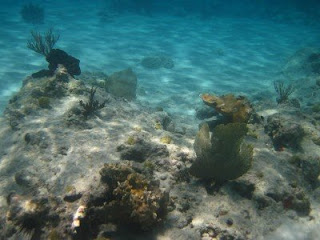 I jumped into the water and set out on a snorkeling expedition. The visibility was very good today. 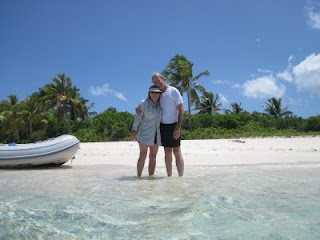 I swam to shore and checked on Phil and Jackie. They were happily exploring the beach and enjoying the view. 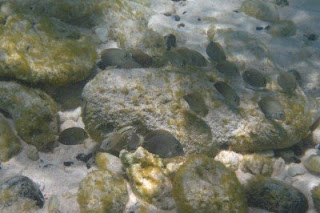 So I went on my way to check out the fishes. I didn't see anything big, but lots of little guys messing around. 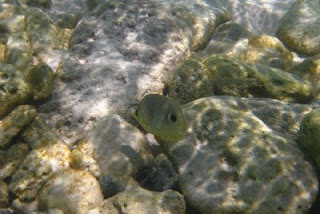 Is this one some kind of Damsel? I must get one of those little flip books that identify the fish with pictures and names you see in the dive shops. 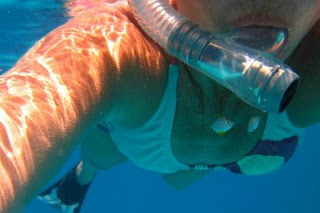 I made my circuit and was headed back to the boat when a little fish popped right out in front of my mask. I was startled and came up out of the water. Then realized it wasn't a bad thing, I continued on my way with the little guy keeping up with me. It was so cute. I thought it was only one fish but when I saw the pics, I realized it was two.
They swam along under me then would come out in front or swim alongside my arm. They had to swim furiously to keep up. I felt bad about leaving them out there to be possible eaten by a big fish out from the deep. I got this video. You can see them swimming around and it's funny to watch my eyes as I see them and then they're gone. enjoy! 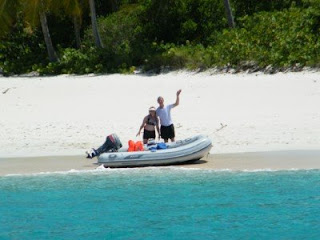 Bruce went back out to the dinghy once I returned to the boat. Phil was having a hard time getting it back into the water to come back. 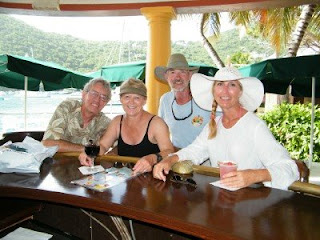 Once everyone was on board, we sailed the short distance to Soper's Hole for some more shopping and Happy Hour. 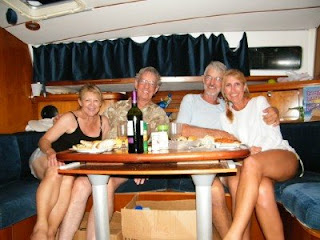 We were all getting that "last-night-out" melancholy. We played in the water around the boat until time to make dinner. We enjoyed Lobster Marinara and leftovers for a great dinner.