BVI Vacation with the In-Laws The Caves ( take II ) 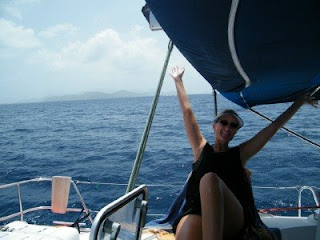 Our last day out... Ahhh but what a day! We set off around the tip of Tortola and made way towards Norman Island to snorkel the Caves with Phil and Jackie. 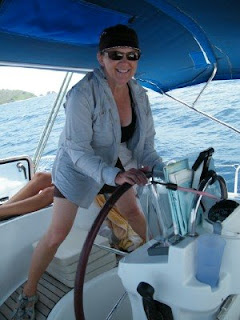 We all took turns on the wheel and motored right into the wind on the bounding main that is the Sir Francis Drake. Jackie found a new position to deal with her vertically challanged-ness. 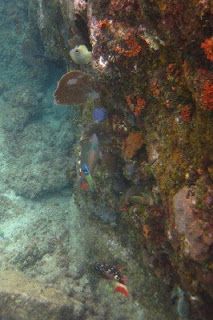 We arrived at the caves and quickly found our mooring ball. We have become so familiar with the place after two weeks, it all seems old hat now. We still could find the beauty and wonder down under as we explored the wall. 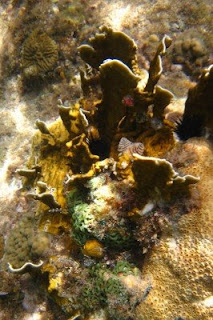 This is Mother Nature's "flower arrangement". The pictures don't do it justice. 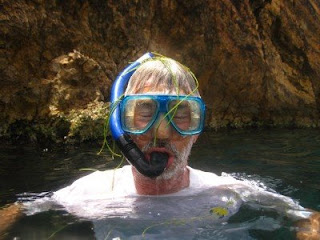 The visibility was good, but there was a bunch of flotsam in the water. Bruce came up with this stuff on his head as he plowed through it. It looks like he could use a new mask too. Look at the water level inside! 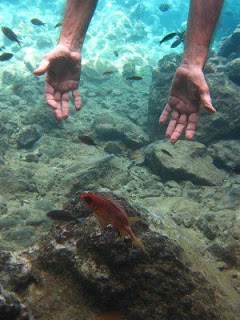 We swam into the caves and I guess the fish were hungry this morning. This little orange guy came right up to Bruce's hands to see what he had to offer.
I never get enough of the giant blue clouds of little fish that stream in and out of the caves. They insinuate themselves just out of reach of predators and of people.
We came out of the caves and explored the wall as the swells brought us closer and then back away from the crashing waves on top. The fish all seem unaffected. It's sad to leave all of this beauty and I'll think of it often after our return home. It's all going on day after day while we resume our lives back home in the real world.
We had an uneventful sail back to Road Harbor where we would spend our last night here. We were escorted by a young dolphin that swam alongside our boat as we neared Port Purcel. Of course he disappeared the moment the camera came out. We pulled up to the fuel dock and gave the boat over to the guys at BVI Yacht Charters. http://www.bviyachtcharters.com/ We would highly recommend them to anyone considering chartering. We've heard lots of things about other companies from other sailors and BVI YC comes out on top. 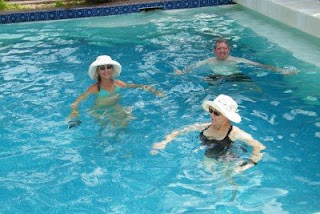 We all went over to swim in the pool and get out of the heat of town at Village Cay Marina and Restaurant. 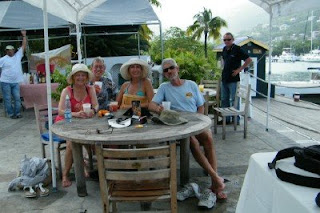 We spent the afternoon hanging out on the deck until happy hour.
We moved into the main seating area where they were serving free... I said FREE... chicken wings. This is an absolute first here in the BVI. Nobody ever tells us tourists where the FREE stuff is! 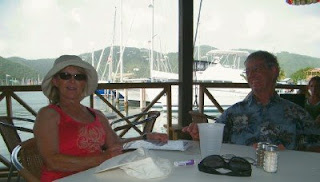 We had the wings, then ordered dinner. Who wants to go back to a hot boat and eat leftovers that were a week old? Not us!
We dined then dinghied our way back to the boat where we ended the day organizing and packing up our stuff. It was better to do it now in the cool of night, than to leave it all for morning. Phil and Jackie were to leave on the early flight out. Bruce and I would leave later in the afternoon.