Staycation During A Pandemic - Part 2 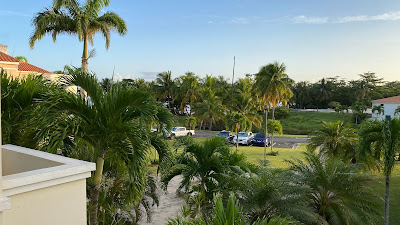 Waking up refreshed the next morning, we had to stay in bed an extra hour because house rules forbade doing anything in the kitchen prior to 6am.  At 6:02, I sent Bruce down to make us some coffee to drink on our own little private balcony.  The neighborhood was peaceful, and if we squinted through the trees to our left, we could catch glimpses of the Atlantic ocean. That's just a little better than we have at home where we can hear the waves, but can't see them!

The coffee switched my mind to the "on" position. Now gaining momentum, we quickly dressed and went downstairs to greet the day.  I had my little sea glass bag, and we filled our camel back packs with ice water.  We said hello and goodbye to our host and hit the beach! 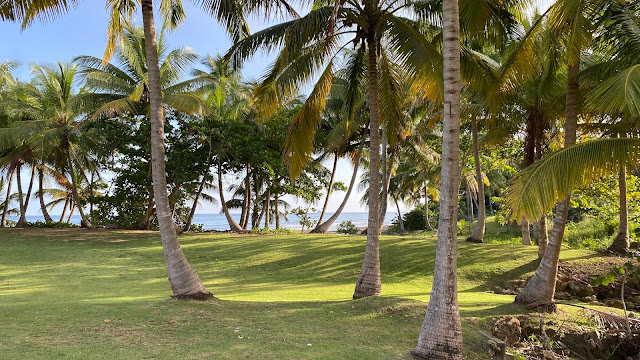 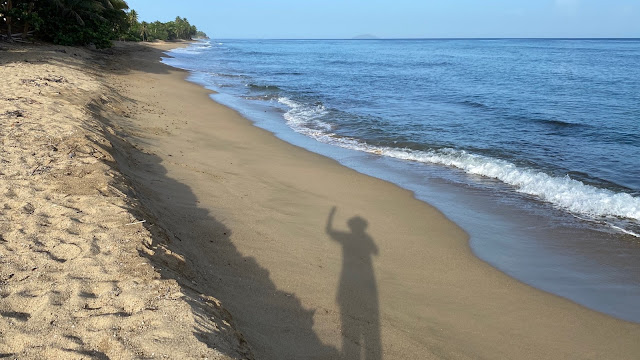 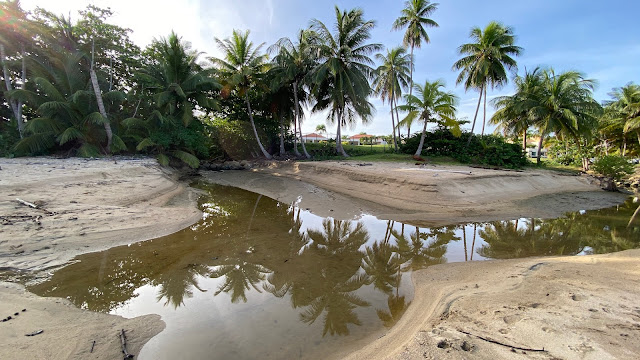 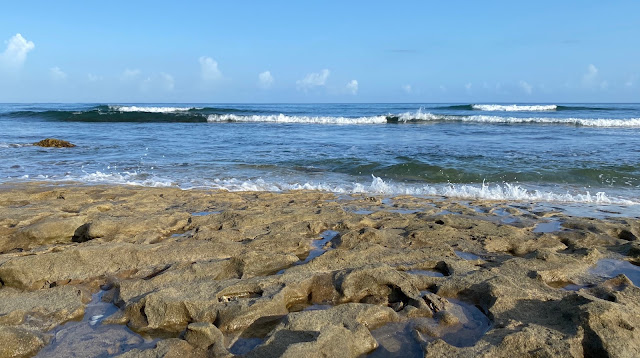 Yesterday evening, the tide was in, leaving only the very steep sloping beach exposed.  I had a bit of trouble navigating the shifting sands with my bad foot.  This morning, the tide was way out and there was plenty of nearly flat beach and a rocky shelf that I could walk on more easily.

Bruce scouted ahead (with his two fully functioning feet) while I picked my way along, collecting the sea glass pieces from the sand and the rocky ledge.  Many times, I would see a particularly desirable piece, and when I bent down to pick it up from the holes in the rock, I found it securely wedged in.  The power of the waves has forced the sand, shell and sea glass down into the holes, that without something to dig them out, I had to pass.  Island problems. 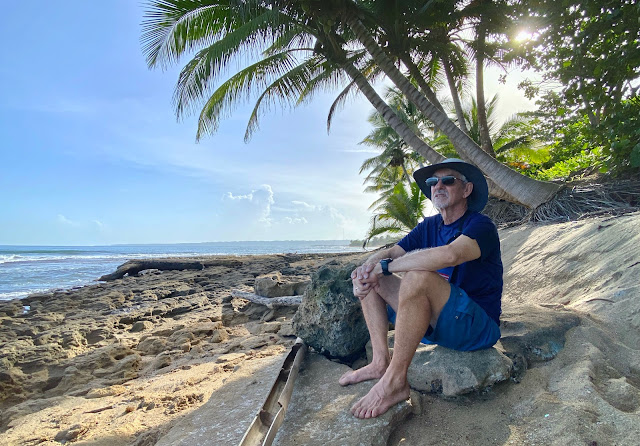 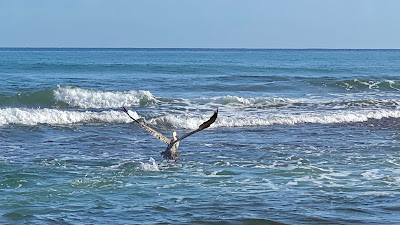 By the time I caught up to Bruce, he was parked on a rock at an obvious turnaround spot.  It was getting warm, and without the hint of a breeze, we were pretty sweaty and ready to return. We rested a bit, just sitting there, looking out at a different view. We counted ourselves lucky once again, to be enjoying this life.  Even WITH the pandemic.

We returned to the condo with our little bag of sea glass, and found the rest of the house up and at 'em!  Our friends were eager to do some snorkeling today, and after a quick consultation with our host about the weather for the next couple of days, we had a plan.

Because of the pandemic, our island has all of the public beaches closed to discourage large gatherings.  It is allowed to visit the beaches that don't have public infrastructure, but still we are only allowed on the beach to exercise or swim.  This makes us all feel a little anxious that we might be ticketed if caught loitering, but at some point, common sense must prevail.  We found a spot to park near the southern end of popular Steps Beach, and walked in the opposite direction of where the people were.  We found a spot beneath the shade of a huge almond tree, and set up our little camp.  Because I can't trust my foot, I volunteered to sit on the sand and watch the gear, while everyone else snorkeled.  I've gotta say... it was not a hardship. 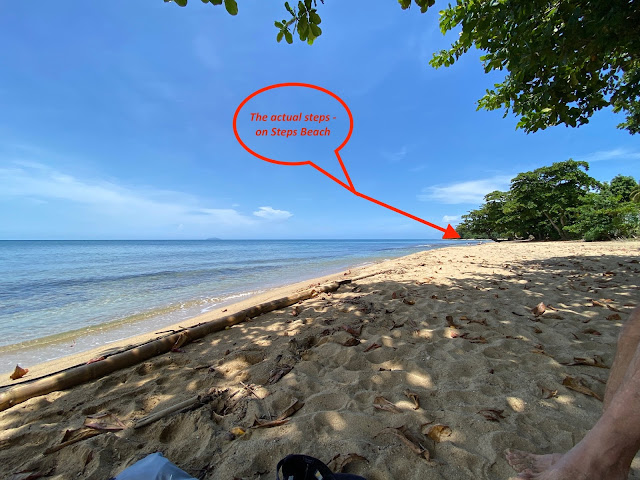 After the beach, we made a grocery run.  Our condo affords us full use of the kitchen.  We have a shelf in the refrigerator, a cabinet in the kitchen, and a small fridge in our room. Serendipitously, there just happened to be a Marco's pizza next to the grocery store, so we ordered by phone from the produce aisle, and picked up our giant pizzas to take back to the condo.  Somehow, the rest of the day evaporated.  We rested upstairs in the air conditioned room, while our friends had a rest and some alone time on the beach.

A new couple moved into the room upstairs, and we spent some time down in the living area drinking wine and chatting with them.  This commune living is kind of neat when you get used to it!

Plans for the next day were discussed.  There are two storms in the Atlantic that are sending a north swell to the island. This has the surfers all fired up!  Mark wanted to get out there and dust off his surfing skills, while Kim wanted to learn to do the stand up paddleboard.  Just off our beach, the surf should be an easy place to surf without being treacherous, but that wasn't expected for one more day. My bucket list was pretty much all about hunting sea glass.  I had several spots marked on my Google map.  So, we all agreed to go find that seaglass the next morning, and maybe try the surfing thing in the afternoon!

When we got up the next morning, we waited until 6:07 to go down for coffee.  But as soon as we got done, we started getting ready.  We were out the door by 9am.  A Facebook friend had told me about a beach in Aguadilla where she found a lot of sea glass.  We enjoyed the drive along the coast, making several stops to check out the beaches. 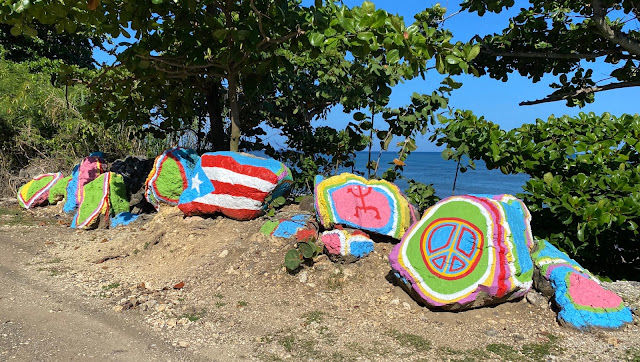 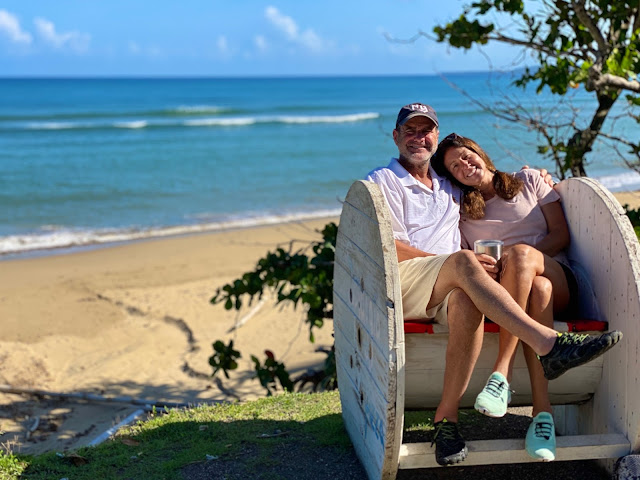 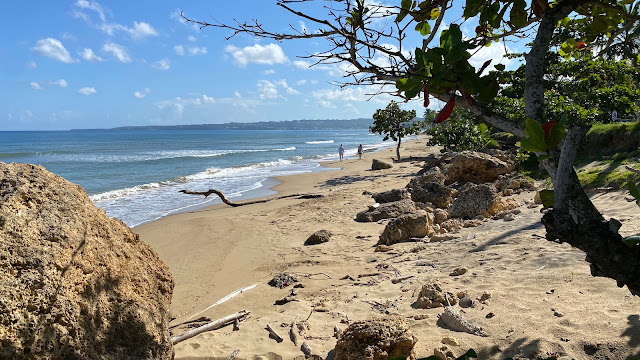 With the public beaches locked down, we weren't even sure we would be able to get to the one I had in mind, much less whether or not we would be allowed onto the beach.  But when we got there by the coast road, we found it fairly deserted, but completely accessible.  Bruce and I put on our sun shirts and hats, grabbed a sea glass bag, and hit the beach! 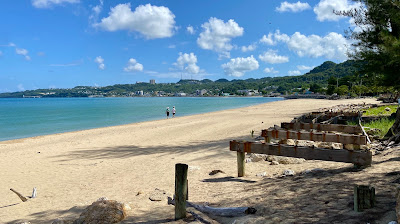 As we stepped off of the pavement and into the sand, the beach looked very inviting, but didn't look too promising for sea glass... Bruce and Mark sat down on a rock to chit-chat about Kansas stuff, while Kim and I pressed onward to see if we could find ANY sea glass at all...

I couldn't believe it! Kim and I wandered up the beach, picking up as much as we could.  I began to get hot and tired, feeling woozie every time I straightened up.  I began to get more choosie!  I wasn't going to bend down for just any sea glass.  I would only bend down if it was for larger pieces, or colors, or if there were multiple good pieces within easy reach.  Pretty much the same!  We made our way down to the far west end of the beach, then backtracked, still finding plenty of pieces, newly washed up!

When we arrived back at the spot where the boys were, my little canvas bag was getting pretty heavy.  We joined the boys on the rocks for a while.  I needed the rest!  It was getting hot.  Kim went into the water for a little float.  The water was perfect for it and I began to regret that my clothing choice for the day had not included a swimsuit!

We made one more pass at the sea glass, going east.  Found a BUNCH more, and finally called it quits!

Back at the condo, we showered and changed, and settled in for a siesta.  This is becoming a habit!  Oh, who am I kidding, Bruce and I have been napping in the afternoon for a long time now!  In the early evening, we went back out to the beach to check on the surf.  The big swells weren't here yet and things were pretty peaceful. 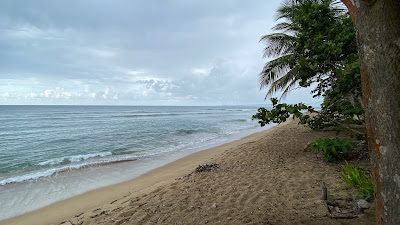 We settled in to watch the waves, but a passing squall rained us out!  We reconvened in the living area and enjoyed the company of new friends, and entertained the 90+ year old Abuela!  She was so sweet.  She loved women, and invited us girls to sit by her and listen to her constant chatter.  It's a mix of English and Spanish, mostly the latter.  And mostly involves blessings from Jesus, and looking at her pretty bracelets.  I didn't get a photo of her, but I regret it!  She was just the cutest thing! 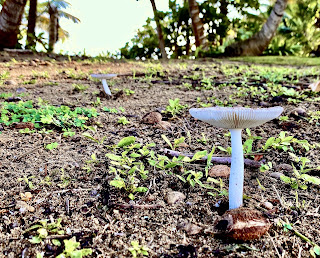 The next morning we didn't really have a plan.  We took a walk down to the beach after coffee, to see what the surf was doing. Mark was up, and he and our host, Bryan were already out there in the waves. 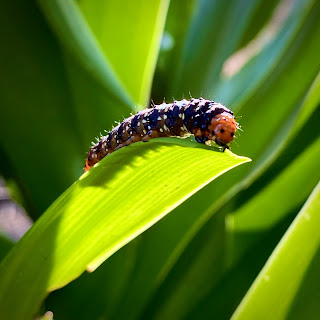 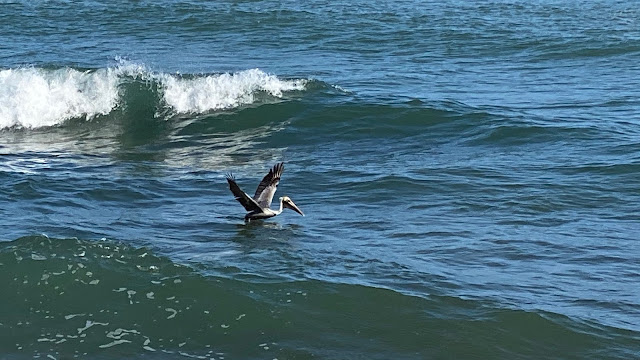 It didn't look too treacherous, but every now and then, a big one would come through.  A bunch of surfers were floating around out there, and as we sat watching, several more arrived.

Mark came in for a break after a while. Kim was still sleeping, and we made a plan to meet up after she got up. 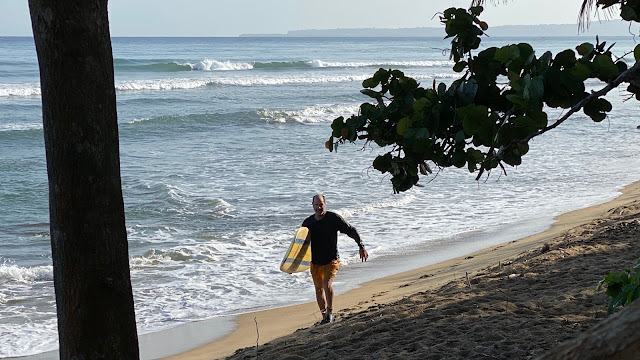 The lure of certain sea glass took us back to the same beach as yesterday.  There was another beach we wanted to try, but we picked the bird-in-the-hand first!  Bruce and I both filled our little bags in no time! 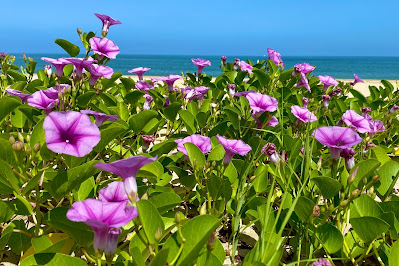 Just as we started the drive to the second sea glass beach, I got a call from Mark.  He and Kim were already there, and he told us that there was no good snorkeling, and NO sea glass!  They asked about conditions at our beach, and we told them to head on over.  Swimming was still good, regardless of surf.  So, we bailed on that other beach, and went back to the condo for some lunch and another nap!  Mark and Kim went on to the sea glass beach and we didn't see them again until it was almost time to dress for dinner! 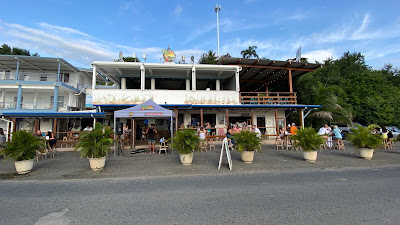 This was our last night with our visitors.  We had plans to see the sunset from a well-known viewing spot, The Beach House!

Regardless of the pandemic, we enjoyed a lovely, socially distanced dinner with the best view on the island. Well, at least the best view of the day! 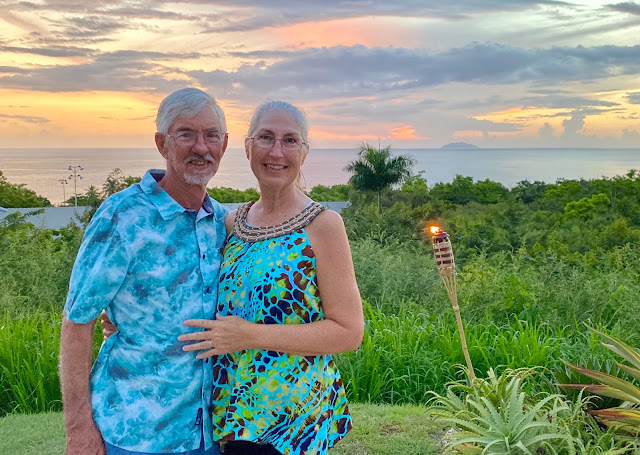 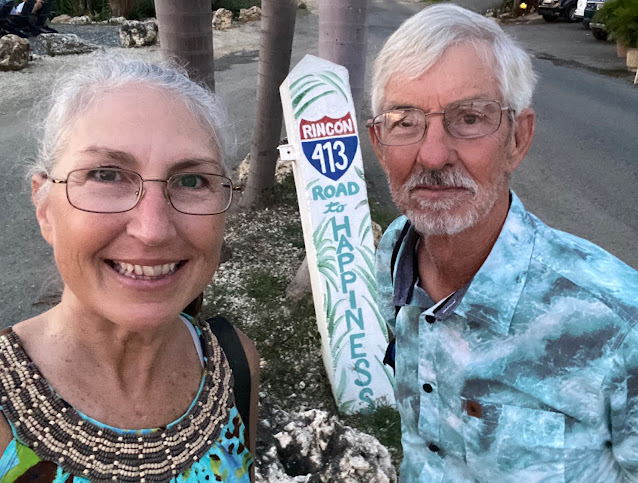 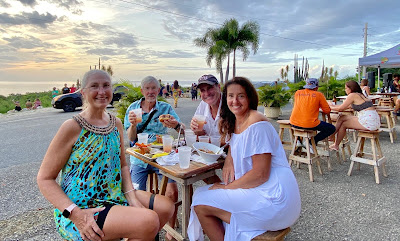 This was our last night with our friends.  We had the usual conversation, "We really enjoyed our visit", "Thanks for coming, it was great to break out of pandemic quarantine". What?  Wait!  That's NOT normal conversation?
Well, nothing about the way we're living these days is normal! We are all just doing our best to get by until it ends.  It WILL end... won't it?  I sincerely and desperately hope so.  In the beginning, I had my reservations about this trip.  We weren't sure it would happen, but it did.  And we have experienced an Attitude Reset!  Sure, there were things that we couldn't show our friends.  But they are falling in love with Puerto Rico and have promised to return!  And I promise them, that the NEXT time, we will get them some more fun.  Some more adventure. And some more breathtaking sights for their vacation buck! 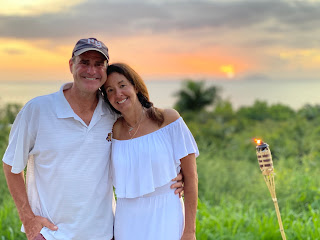