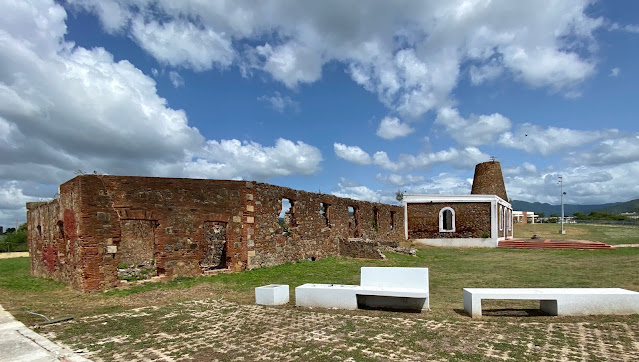 Going back maybe a year or so... one day, Bruce and I took off down a side road that lead us deep into a neighborhood, and into one dead end after another.  We were trying to get closer to an old ruin we could see from the road, that looked like it had once been a sugar mill.  There are several of them around nearby, and of course, I want to inspect them all!

Fastforward to about two weeks ago, we were on our way to the new Selectos grocery store, which just happens to have been build on the property adjacent to that of the old mill. As we pulled into our parking spot, I happened to glance over at the property and saw that the gates were open!  This is the first time I've seen them open, and we thought maybe we would mosey on over there after we were done with the grocery shopping.  Wouldn't you know it, the gates were locked up tight when we came back outside.

Well today... it happened again.  This time I immediately did a u-turn in the parking lot, and drove us right over there and through the gates as boldly as you please!  There was a man standing next to one of the buildings and he looked friendly.  I pulled up and asked if we could go take some photos.  He said YES!! 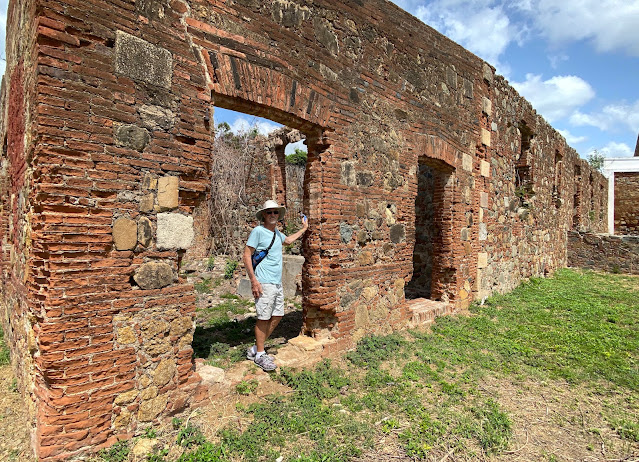 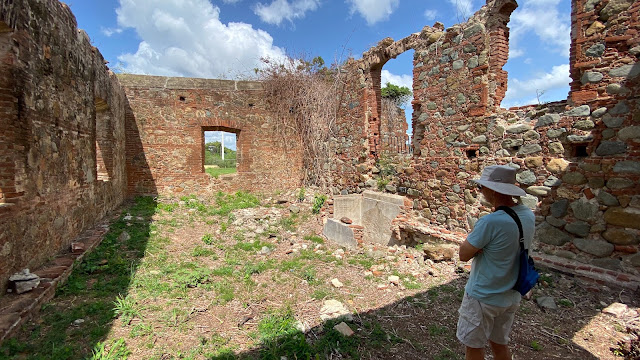 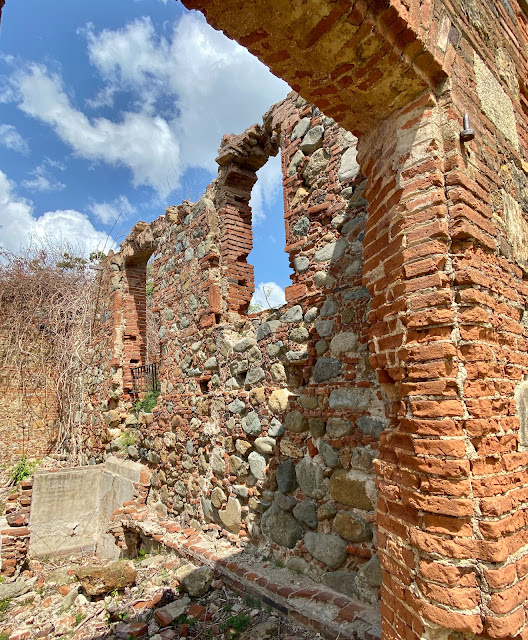 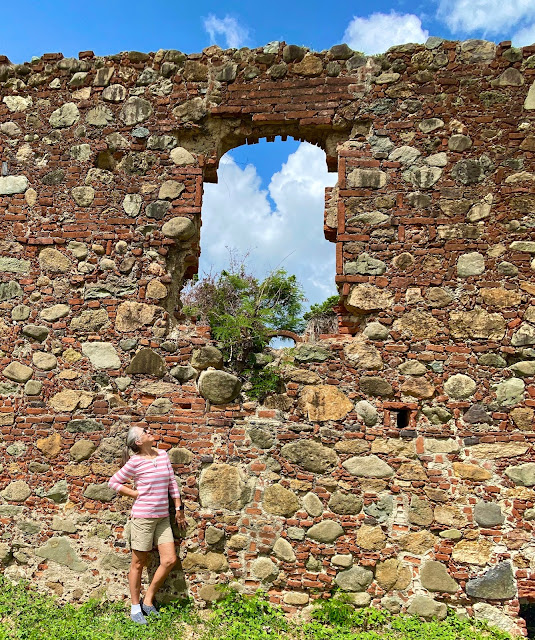 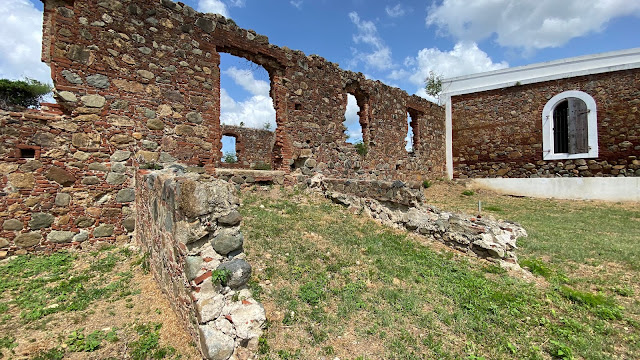 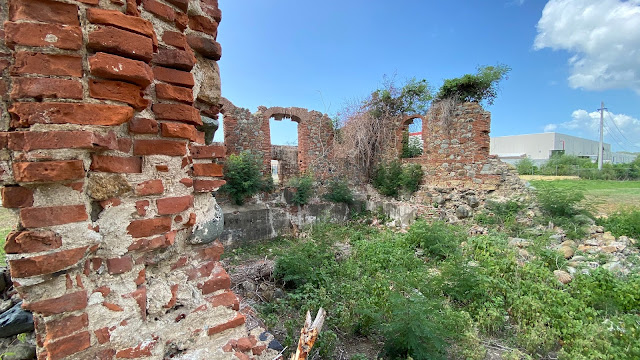 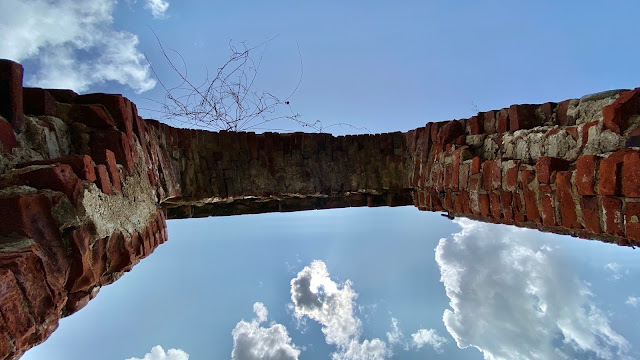 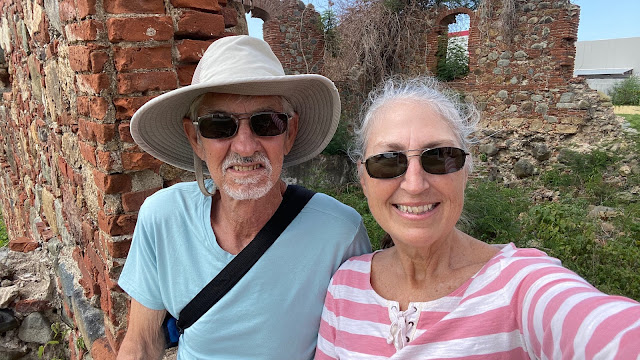 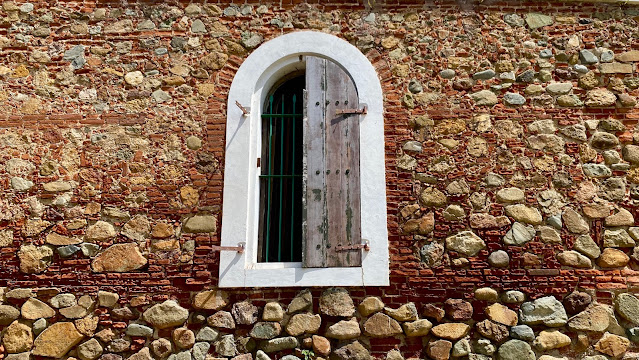 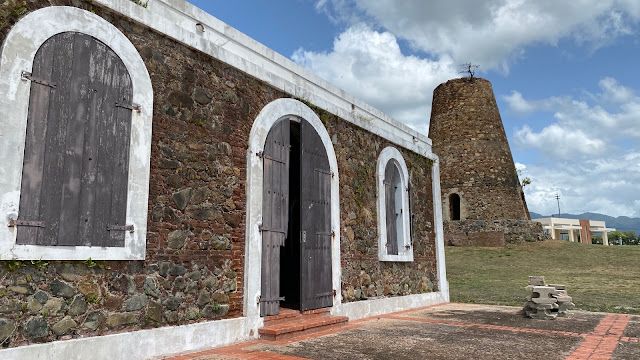 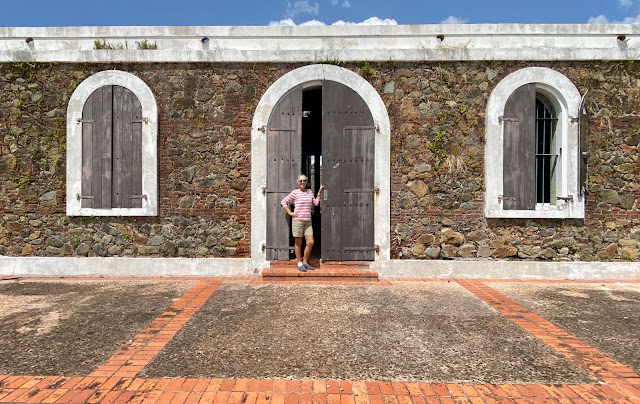 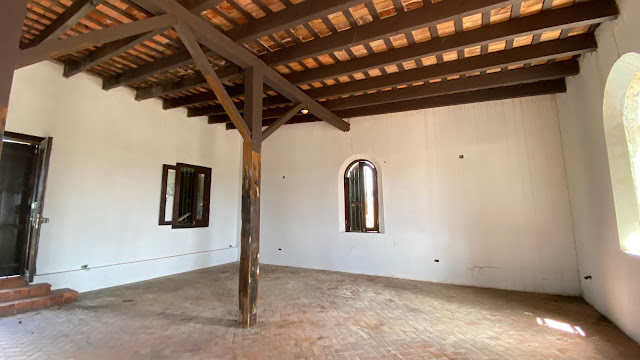 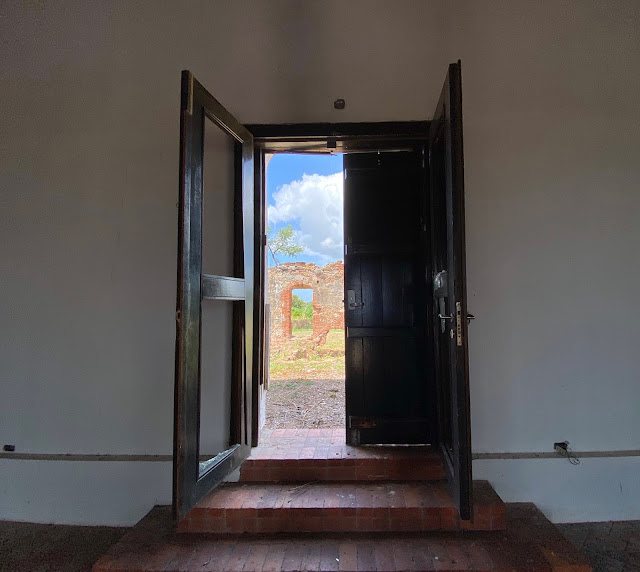 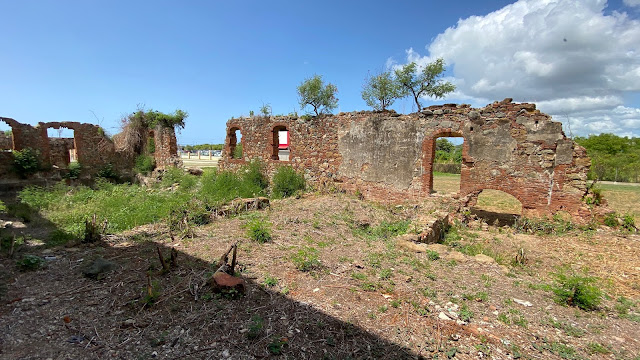 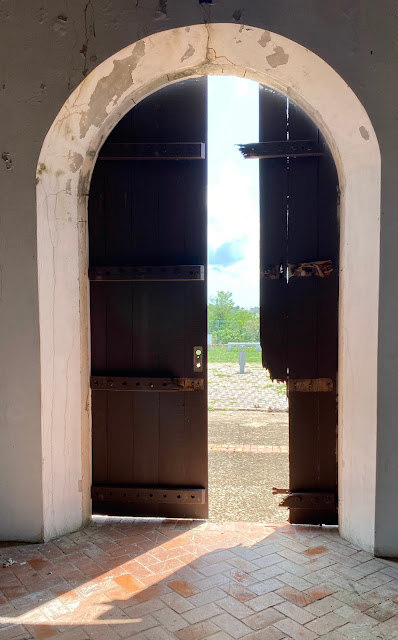 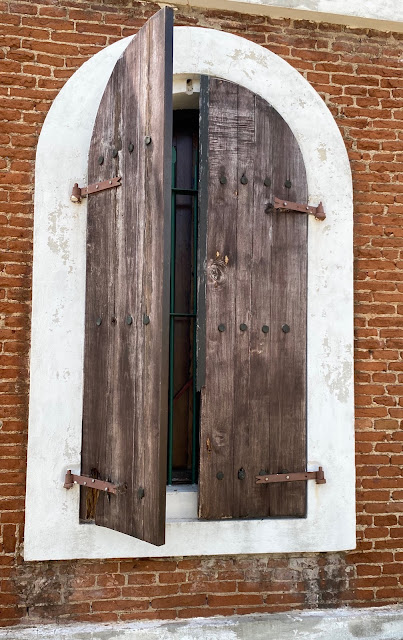 I went looking online for information about the place when we got home. I found out the name, and from there, found a couple of articles about the place. Below I have copied from a Facebook post by the Puerto Rico Historic Building Society.
Hacienda Vives, Guayama, Puerto Rico

Vives sugar ingenuity is one of the oldest existing structures related to the Puerto Rican sugar industry. It is located on the grounds of the old Hacienda Vives in the Machete neighborhood of Guayama, municipality located in the south of the island.
The complex consisted of two structures: a windmill and a processing plant. The truncated cone mill is 40 feet tall and 28 inches in diameter. The structure, which is located on a promontory north of the processor plant, had four levels built of wood. The sugar processing machinery was on the first level and operated by windmills, in turn, located on the fourth level. This space connected to the outside through four different arches.
The processor plant consisted of a 20 ' x 137 ' x 35 ', north-south-south-south warehouse. The closest part to the mill, where the boilers were, was paved with brick, while the rest of the structure had wooden floor. The original roof was wooden fences covered in tiles. The north ship and fireplace were destroyed and only parts of the base of its walls remain.
The structures were built of river stones, granite blocks and bricks. Details in the main building seem to indicate that the building was built in stages, with the central building being the oldest. The details of the doors and windows are different in the different parts of the structure. The construction date is not known for sure, but it is believed to date back to 1828. By 1910, the complex was no longer up and running.
The Vives Hacienda was declared a historic monument in 1976 and passed to the Institute of Puerto Rican Culture.

We wandered around the crumbling buildings, wondering what might have been beneath the floors.  There are caved in places, and what looks to be either a doorway, or stairs leading down.  I'm sure there must have been cellars down there. But who knows?

We went inside the building that's very much intact.  I hope that money has been found somewhere and that this place will be restored fully and open to the public at some later date.  The whole property looks as if there was some development that just stopped.  Newer buildings with broken glass.  Maybe Hurricane Maria damage?

The best part was the old circular building that was surely the mill.  It stands tall with a tree growing out of the top wall.  When we arrived here, we saw some sort of hawk perched in the tree.  What a treat it is to be allowed unfettered access to places like this!! 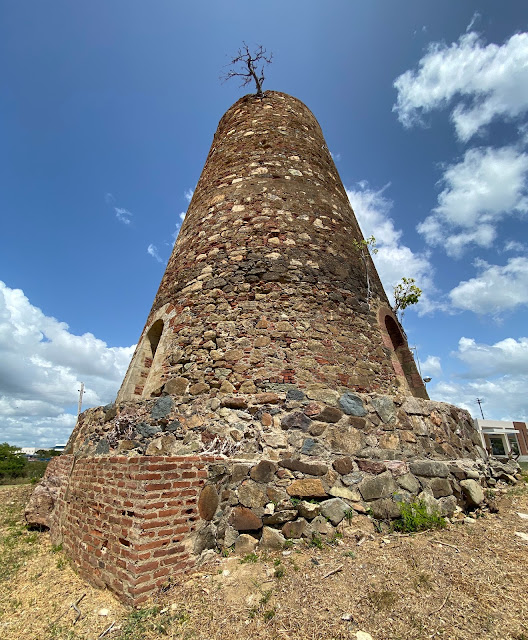 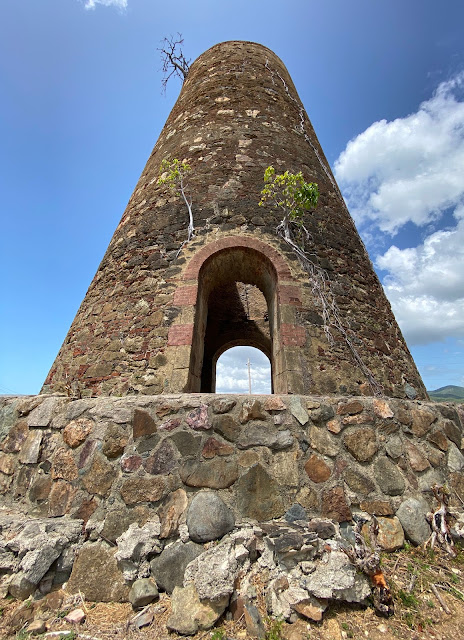 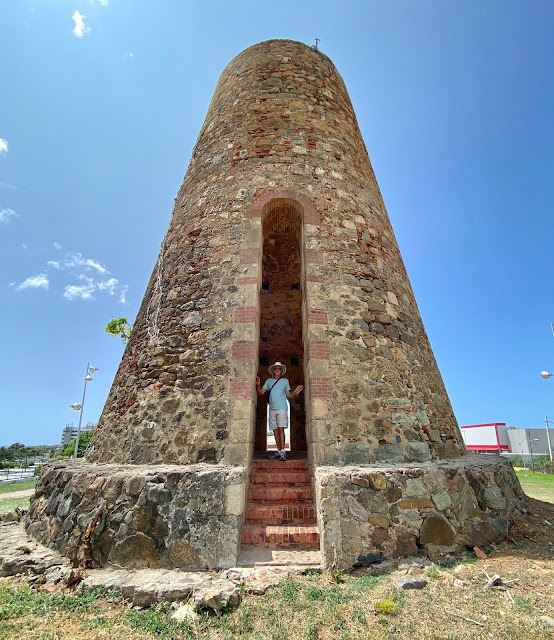 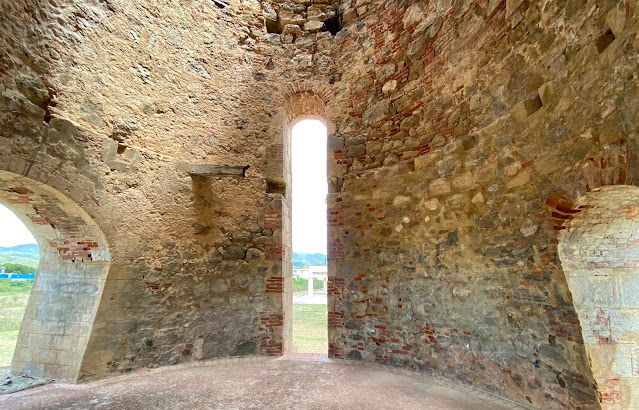 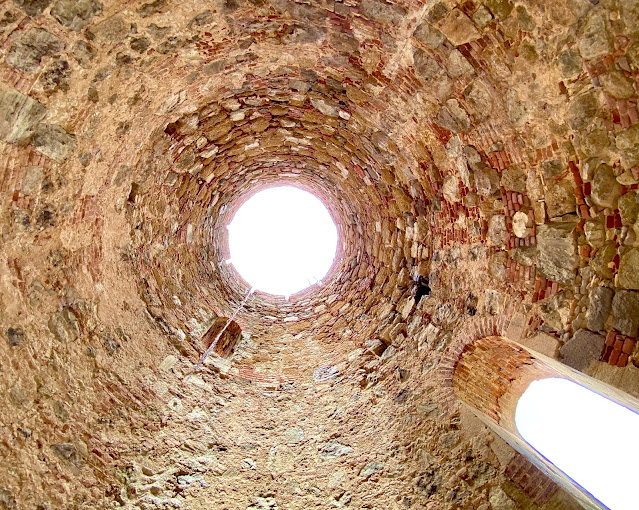 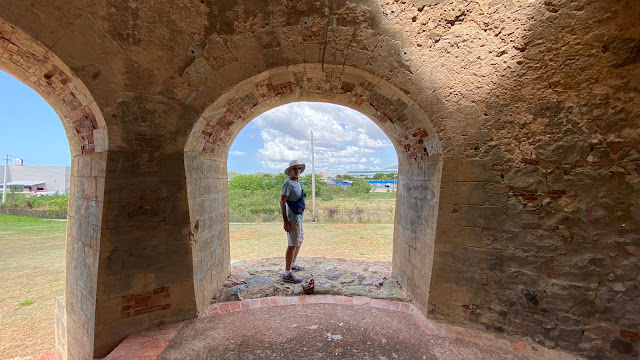 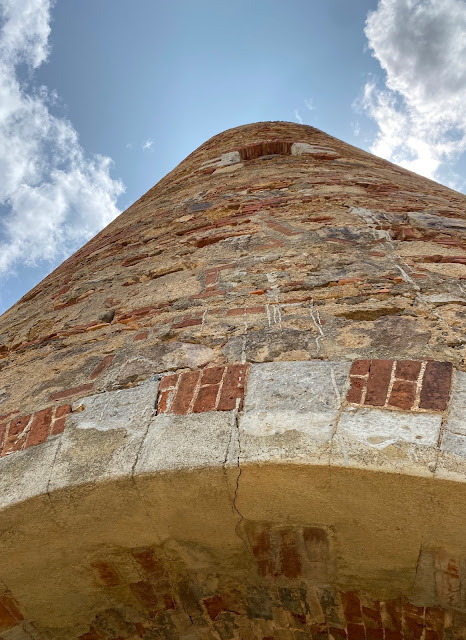 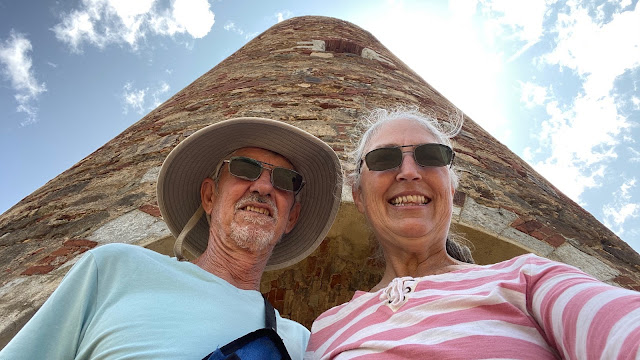 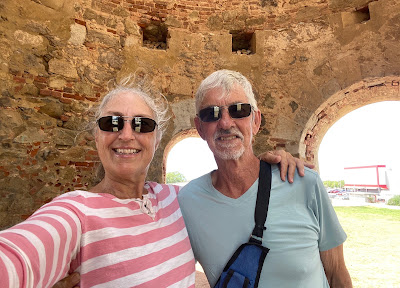 Below is another snippet of history about this property that I found and copied from a website called :

Biography of the Riches of Puerto Rico.

Located in the Machete neighborhood of Guayama, although Luis Ferreras Pagán located its foundation in 1860, when the mechanization of the farm began, by 1828 there was already this farm known as Hacienda La Esperanza, owned by Mr. Don Juan Francisco Rivera, founded by his grandfather Jacinto Texidor. This farm consisted of about 500 acres whose limits were the town of Guayama to the north, the lands of the Matías Picó and Collazo Successions to the south, the Machete road that goes to Barrancas to the east, and to the west, the road Real de Jobos and the estate of Don Juan Augusto Blondet. By 1854, the estate had increased to 567 acres, reaching the border with the Paul Estate and the Enriqueta de Arroyo Estate to the northeast, belonging to Eduardo Lind and Susana Morse (daughter of Samuel Morse). It then had a large house, sugar cane fields, two central buildings, a lime kiln, pumps for water extraction and irrigation, and a mill. Subsequently, Don Juan Rivera's sister, Doña Isabel Rivera y Texidor, in addition to having inherited part of the farm, was buying pieces of the land until finally she acquired her brother's part and when she married Don Juan Vives de la Rosa the farm changes to the name of Hacienda Vives. In 1892, the hacienda was sold to the Hermanos Amorós, at which time it had a large house, carts, barracks for laborers, buoys, ranches, and cane plantations (200 of the 567 ropes were destined to the cultivation of cane with up to 700 bocoyes of muscabado sugar per year), five marichales, syrup bombs and a five-pail Jamaican train for the production of sugar, in addition to steam engines acquired between 1860 and 1870, a 90-horsepower multitubular boiler and facilities for the production of rum. After the invasion of 1898, the hacienda was bought by Luce & Co, a corporation that administered the Central Aguirre and that, in 1970, was transferred to the Land Authority of the Government of Puerto Rico. Since the early 1990s there are plans to enable the place as a museum dedicated to sugarcane. 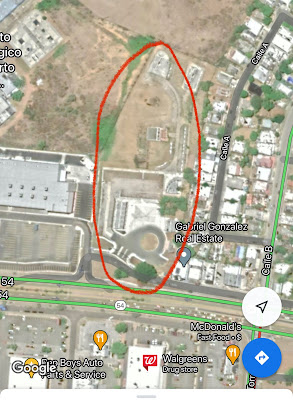 What an unexpected treat it was to have the pleasure of exploring another of the historical sites of our new home!  The moral of the story today is:  Always go through the gate NOW!