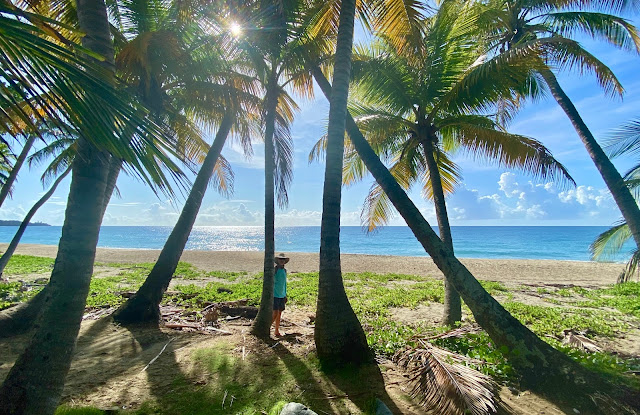 Yesterday's sea glass bonanza left me wanting more!  Bruce agreed, so as soon as breakfast was over, we packed up and took off again.  We were heading for Playa Los Bohios, same beach as yesterday, but somewhere along the way, we took an unexpected right turn onto a very tiny and obscure road... which lead to this! Turns out, we have actually been here before, but forgot all about it!  And because there is no name for it on the Google Map, we've named it "Forgotten Beach"!

The beach stretches on to the west only a short distance from where we parked the car, before terminating in a rocky point that is just beneath a restaurant called Paisajes Curet. Not knowing the distance going the other way, we chose to begin with the longer beach to the east.  We set off walking, bending, picking and zig-zagging to get the best pieces.

This time, we each had a collection bag for our sea glass. This allows us to separate and cover more ground.  Some of the pieces we picked up yesterday were not quite ready, so today our strategy was to be more selective.  We would concentrate more on the walking aspect, and only slow down to pick up the biggest, and best pieces of sea glass. 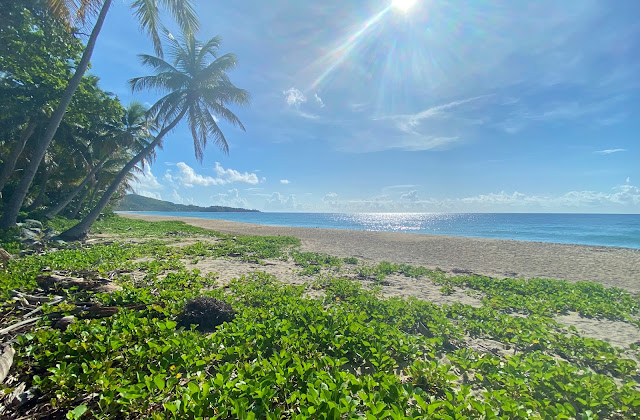 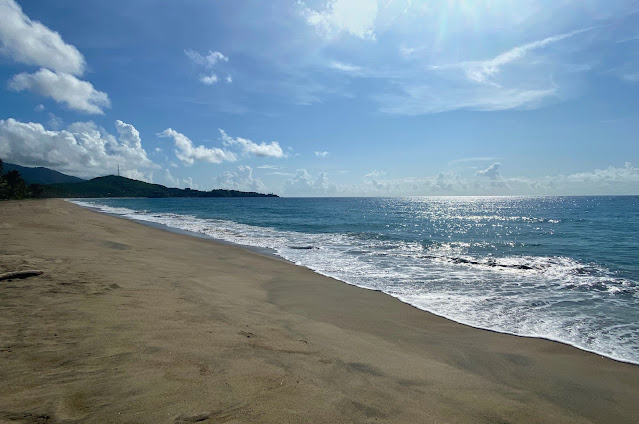 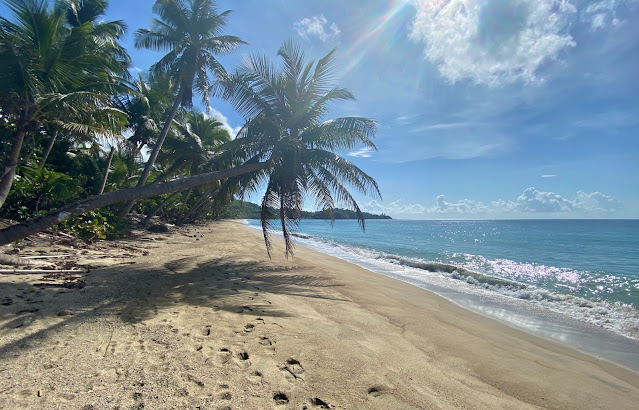 We enjoyed the walk along this pristine stretch of beach.  We never saw another soul, although there were a few footprints left by early-bird walkers. We raced along, trying to catch up to the endless procession Great Southern White butterflies that sped past us as we moved up the beach. They were always just a little bit faster than we were, as they flowed around us and continued on their way to wherever it is butterflies go.

Serendipitously, my Fitbit pinged the one mile mark just as we reached the mouth of the Rio Maunabo!  It was the perfectly sensible turning point, with a leaning tree (that you might remember from yesterday) as the resting spot. Today we are enjoying more sunny skies, and with that, the heat!We paused for a while and enjoyed the shade and the cool breeze, then I left Bruce drinking his water, and went on back along the tree line where the best sea glass pieces are found. Imagine my surprise when I caught a glimpse of movement, and realized that it was a mongoose!  Evidently he had not seen me... but I saw him!  He paused beneath a large piece of driftwood, thinking he was invisible...
Incredulous at this unexpected encounter, I scrambled to get my phone for a video.  I began recording and the mongoose didn't move!  So, I began to creep toward him, hoping for a really good view. It would have been so perfect, if not for my slight bobble at the precise moment he raised his head and saw me!  He scuttled off into the palm trees and all I got was a brief glimpse of his head!  Dagnabbit!
All the way back, we picked up choice pieces of sea glass, but the real star of today's show were the hundreds of sand dollars scattered among the drying seaweed.  Just like our breach, this part of the island has experienced a kill, most probably from runoff from recent rains. All the way to the car we picked up sand dollars, and even a few other nice shells!
Back at the car, we put away our treasures and got out the beach chairs.  We were dripping with sweat and wanted to enjoy the cool shade, and the stunning view for a while before returning home. 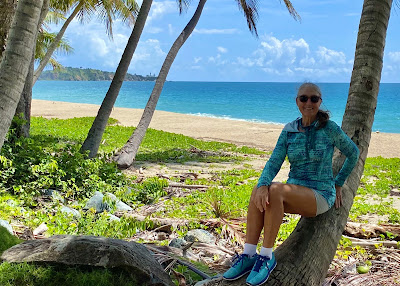 Wow!  What a wonderful spot!  We chastised ourselves for not remembering this spot after we found it, and mentally moved it up to Favorite status!

So now I'm beginning to notice that we have visited four different beaches in four days.  That's sort of a record for us... and with the idea to stretch that out to a whole week of different beaches daily... a plan was born!

And it didn't hurt that my sea glass/sand dollar collection was benefitting!  I think I'm just about to get started on making something with them... but not until we hit those three remaining beaches!