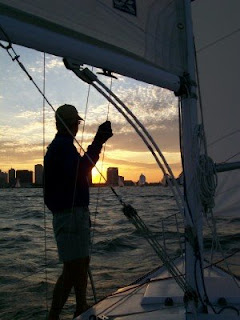 It was back to the races on Wednesday night. Last week’s hurricane scare kept us off of the water but there was a good turnout this week. We had been promised the unveiling of Steve’s new sails. Steve was unfolding them when we arrived.
Unfortunately, my luck seems to have attached itself to Steve and the mainsail was very much too long. This was disappointing to Steve to say the least, but we pulled it down and replaced it with the old stand-by. 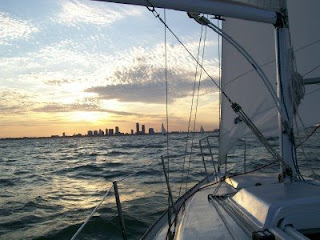 We did use the new jib but it will have to be altered as it was supposed to be cut high so as not to need to be skirted in the tacks. It was just a bit off of that so skirting fell to me this week.

It was a cool evening…remnants of the passage of Sunday’s cool front still lingering. I had to bring out my jacket for the first time this year. We had a pretty wet ride. 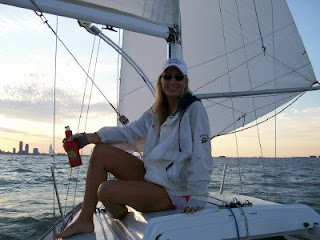 It feels odd when the air is cooler than the splashing waves. I sat out front and caught every one of them.
We had a pretty good race. We think we beat Kinderspel and maybe did well against Lone Star. We’ll see how it goes when the results are posted. We are still having a good time learning the boat and settling in. We don’t need no stinkin’ new mainsail…