A Day with Doug and Sally

Friday night Bruce and I cooked on the boat. 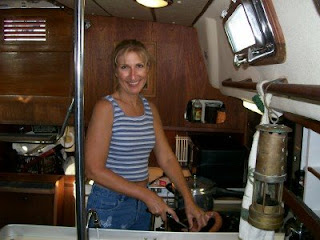 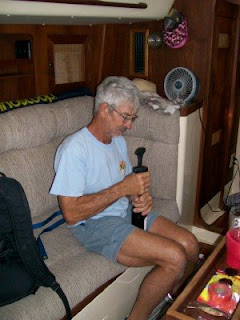 We wound down with a bottle of our own wine and had a simple dinner. The workweek had been brutal but we quickly switched over to island time. 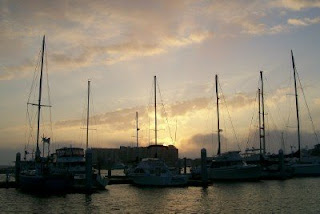 Saturday morning we woke up early and watched the sunrise with Doug and Sally and discussed the day ahead. We planned to go out on a near shore fishing expedition on Doug’s 28 ft Luhrs. This was his sister Sally’s first fishing trip with Doug on this boat. They invited us to go along and we eagerly accepted. 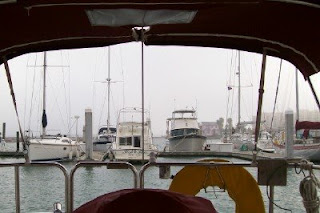 A fogbank rolled in just as we finished breakfast and so Bruce and I made a quick trip to the IGA. We drove out to the beach and saw the end of the fog coming so we ran back to the marina just in time to jump aboard and head out.

We went just outside the jetties and began to troll small lures. 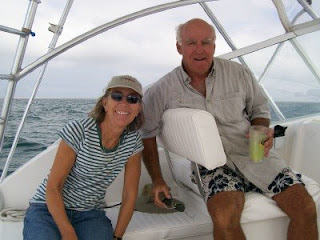 Our targeted prey…Spanish Mackerel. We enjoyed motoring slowly about in 25 to 40 feet depths but no fish were taking the lure. The seas weren't high…only about 2 to 4 feet, but it was a short chop. It was as near to Corpus Christi bay conditions as you can get in the Gulf. 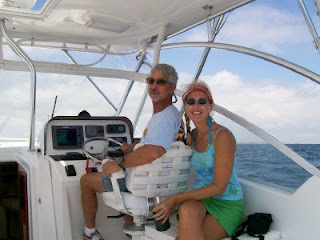 We girls striped down and enjoyed the cool breeze and the intermittent sunshine while the guys monitored the trolling.

We gave up and headed for the calm waters of the channel and as we were battling our way through the roughest part, just inside the jetties… I saw that there was a fish on the line. Doug and Sally sprung into action. Sally reeled the fish in. It was a Spanish Mackerel. Doug REALLY knows his stuff! 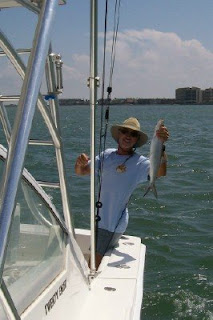 We motored up the Lydia Ann Channel to look for fish where Bruce and I had been last weekend. We found the waters boiling with batefish jumping out to get away from something. Birds were diving, dolphin were rolling. It was fun. Bruce and Sally both began to throw the lures and Bruce caught several. Unfortunately it was just a bunch of Skipjacks or Ladyfish. They are fun to catch but you don’t eat them. Luckily, they flip off of the hook most of the time to save you the trouble of throwing them back. 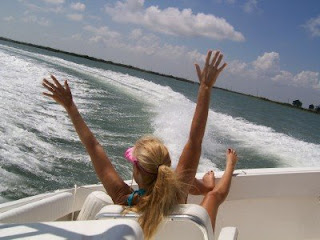 Suddenly the fish were gone so we went on a bit faster up the channel.

As we neared the turnaround point, the coast guard boat came up and requested permission to come aboard. Doug had seen them working the area earlier so he had all his stuff out and ready to present for the inspection. They were very nice and we chatted while they filled out the paperwork. I didn’t think it was prudent to try to take their picture with them being a branch of Homeland Security and all. 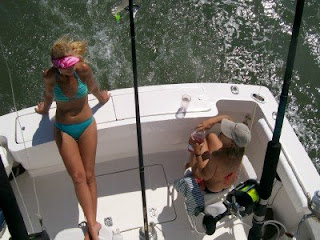 We continued on back to the CC Ship Channel and took a short jaunt up to the Piper channel. I joined Bruce and Doug on the fly bridge. The view from up there is so much better.

I got to drive from up topside. It rocked wildly when a boat passed us leaving a big wake. I can’t imagine how it would be out on the gulf in high seas riding up high. After a while, we headed back to the marina, thus ending a fabulous day on the water. 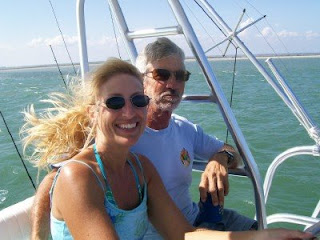 But it wasn’t over yet. We all went to the beach bar for burgers and fries. Doug brought along a game called “Pass the Pig”. We played it while waiting for our food. It’s won by rolling little plastic pigs like dice and you gain or lose points by what position the pigs land in. Odd…but fun. We had to give Doug a rain check on taking him sailing on our boat. Sally had to catch a plane out of San Antonio on Sunday. We went back to the boat and collapsed into the V-berth for a night of gently rolling slumber aboard Elan.