Saturday morning Bruce and I drove to Corpus Christi Marina to meet up with Mark and Brenda for a day of racing aboard Sea Flight. BYC hosted this cruisers race from CC to Ingleside. The day was perfect with winds reaching 10 to 15 kts. The bay was absolutely beautiful with light chop.

We met Mark and Brenda’s daughters, Sally and Susan as well as the latter’s new beaux, Nathan whom she had brought home to meet the parents. Nathan had never sailed before but he was a willing asset to the crew and learned very quickly. You would never know he wasn’t a part of the family.

Bruce and Mark were in racing mode so the rest of us had to snap to it to avoid bloodshed. They plotted their strategy and off we went. 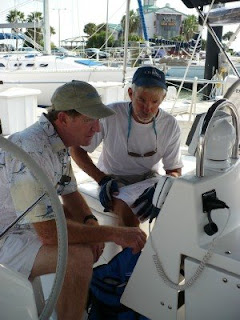 Bruce gave the kids some hasty sailing pointers before the race began. Both Sally and Susan were eager to learn as their parents have only been sailors for a couple of years and the girls are happily soaking it all in. Even I had a chance to pass along some of the tricks I’ld been taught by fellow crew members when I was first learning to sail back in the Lady Jane days. 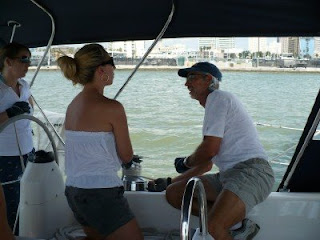 We got things going and settled in. The race had a staggered start. It was slow at first, slogging through the waves...
but when Bruce and Mark got the sails trimmed out we got some speed and it felt pretty good. 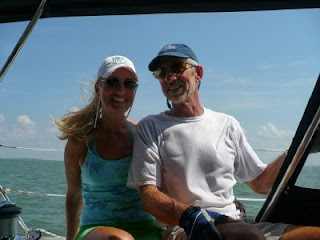 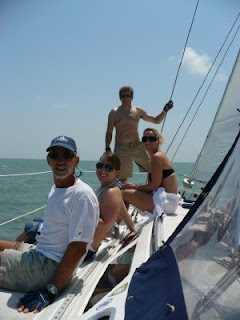 It wasn’t a long race and it ended between markers 43 and 44. After the race, most of the boats went over to IOB for the party but we and 2 others went on up the Ship Channel to Port A. 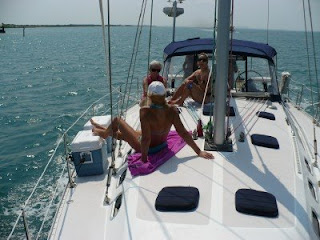 We had not won the race but we weren’t DFL either so we spent the rest of the sail celebrating on deck. 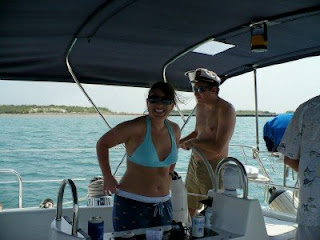 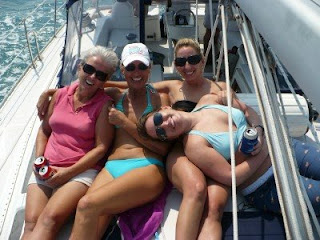 Young Nathan was dubbed “Honorary Captain” for the afternoon. We were having a great time until well after we docked. We finally parted company to get showered and leave the Sea Flight family to entertain themselves. Bruce and I went to dinner at Pelican’s Landing but it was terrible.
We ended our day sitting out at the end of our dock listening to Larry Joe Taylor sing to us from across the marina. Mark, Brenda and the kids joined us and conversation flowed (as well as the wine) until 1 a.m. Surely some kind of record for Bruce and I.