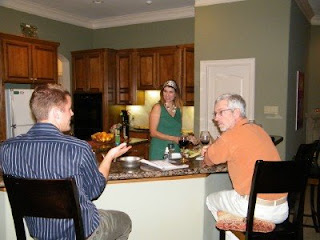 Bruce and I were invited to dinner at John and Yedda's new home in King's Crossing on Monday night. We arrived to the sound of barking little dogs and were reacquainted with Skipper, their Maltese and Titch, a fat little Dachsund. John explained that a "titch" is a little bit.

We were soon joined by young Ryan with whom we have sailed aboard Wet Express several times. He is a pleasant well travelled young man with no problem expressing opinions and ideas. He seems to enjoy hanging around with us old and older people even though he is only 23. He is a Navy boy and is well behaved as long as there are no other Navy boys around so we enjoyed his company last night. 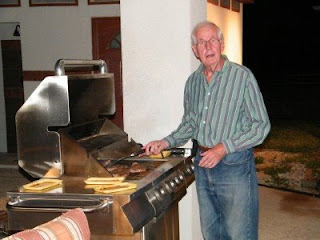 John grilled some wonderful steaks while Yedda prepared the salad and potatoes inside. Bruce and I shared a couple of bottles of the Cabernet Sauvignon-Shiraz blended wine that we had made back in July. If John didn't like it he sure faked it well. I think we have him sold on stopping on his way through San Antonio to make a batch of his own. 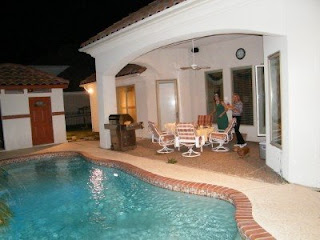 Suddenly the steaks were done and Yedda and I had to hustle to get everything out onto the patio where we had our dinner. We had a very nice time there overlooking the beautiful babbling pool in the protected cove of the patio. 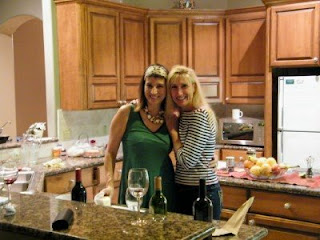 Yedda is so lively and interesting. I never see her without uncovering another facet of her that I knew nothing about before. She has been painting copies of a well known painter. I couldn't get the name as her Brazillian accent is lilting and thick. But she has painted many of this artist's works and has hung them in the new house.

All too soon it was the Pumpkin Hour and we had to go home. It was a Monday after all... some of us had to be at work in the morning. I helped Yedda clean up the worst of the mess and we said our goobyes.