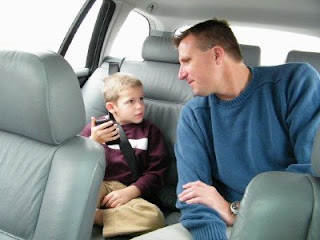 Saturday morning we loaded up Mark and Nathan in the car and followed Charlie and his kids and his sister Louise out to the King Ranch. It was time for the annual Ranchhand Breakfast. We had never been before and had no plans...so it seemed like the thing to do. Mark had filled Nathan with stories of how they raised the Cowboys to be eaten in the taquitos. Nathan didn't think this was true...but he didn't sound so sure. We arrived to find Ranch Hands heating iron pieces in a redhot oven to pound them into the shape of a horse's hoof. The horse waited patiently by, while the guy got it just right. 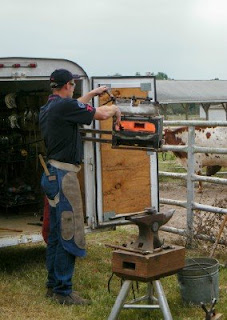 Another man cleaned and prepared the hoof to be fitted with the new shoe. 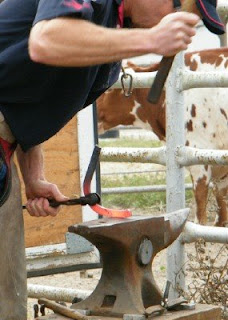 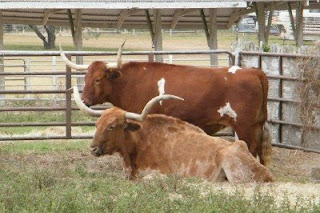 We saw real Texas Longhorns lazing around watching the whole process. They looked as though they were happy to be left alone and shoeless! 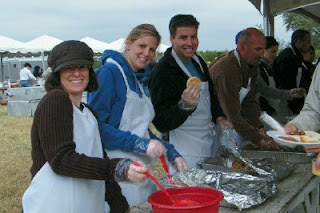 I had feared huge crowds with long lines waiting for the promised Cowboy Breakfast. I was pleasantly surprised. We stepped right up to a happy bunch of servers to receive our taquito with refried beans and a biscuit smothered in thick cream gravy. 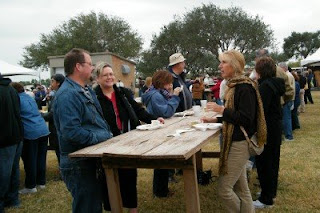 We enjoyed our breakfast standing at long tables with plenty of room for everyone. 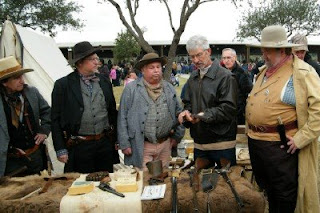 Bruce was intriqued by the display of firearms in the old west. It included a Henry's repeating rifle which was first used in the Civil War, of which it was said... the gun was loaded on Sunday and fired all week. It was the first successful non single shot rifle. The display also included a Sharp's 50 calibre, which was the rifle used to destroy the buffalo herds. 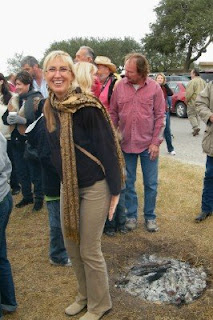 All of this was going on whilst I warmed my chilled bootie on a nearby camp fire. 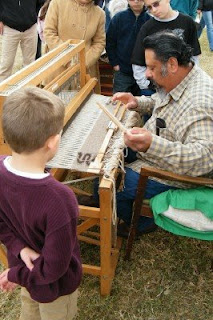 We all watched, fascinated, while a man weaved a pattern into wool strands to make an indian lap robe. His hands seemed to know just which strands to pick up and which to leave. The impossible part was the different colored patterns he wove into the background. How does he do it? 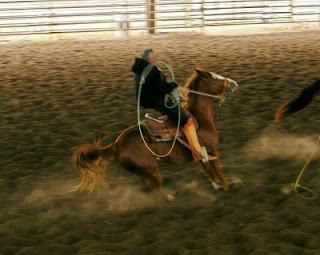 We watched a team roping contest. The Cowboys (the ones left behind and not made into sausages) took off after the calves, threw ropes over their heads and brought them down. The calves seemed game. 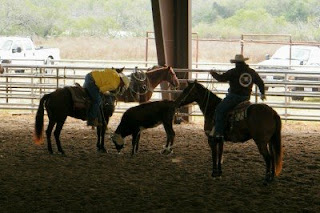 It was a great morning and something we had not expected to be doing when we thought about our weekend plans on Friday. Somehow, something always fills those spaces. On our way out, I asked Nathan how he had liked the Cowboy sausage. He said it was GOOD! But he still didn't believe it was made of real Cowboy! But, again... he didn't sound so sure.