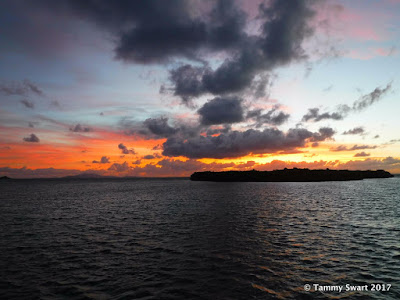 The weather pushed us out of Almodovar a day too soon.  The only good day this week for making the jump from Puerto Rico to the USVI was firming up to be on Thursday, leaving us only one day to enjoy Culebrita with Adventure Us 2.

They left Ensenada Honda early and we joined them in the channel between Culebra and Culebrita about mid-morning.  It was difficult to leave the calm flat water for what we knew would be a rolly anchorage, but since we may not be back this way for a long time… maybe never… we took a gamble.


I wanted to show our friends a place that had been idyllic for us… the hike to the lighthouse for a stunning view, the scramble along the shore to the Jacuzzi… But what a difference a few months makes!  When we came here the last time it was during the “low season” and on a weekday there were few boats in the anchorage.

This time it’s “high season” and even on a Wednesday the place was a ZOO!  The one boat that was here before us led us to false hopes and by the early afternoon there were dozens of boats coming and going…


The roll in the anchorage was not the worst we've experienced but it was borderline uncomfortable…  I was feeling just a little bit head-achey and wanted to sleep… but we needed to finish cleaning the bottom of the boat to improve our speed the following day.

I had some concerns about Bruce being beneath the boat with it bounding like it was… but he assured me that he could keep from bashing his head… so I got my tools and my floatie and went to work on the port side waterline.

It went much faster this time.  There was less growth on this side until I got to the bow…  I don’t recommend doing this in rolling seas as it is SO much more work than just waiting until a calm day… but we don’t have any of those, so let’s just call it an exercise session.  I’m sure my heart rate was elevated for quite a while.

It wasn’t only the workout that elevated my heart rate however… There were boats zooming everywhere causing wakes that bounced me and splashed water in my face… And then THIS.  I looked up and saw the stern of a huge catamaran WAY too close!

The woman at the helm looked back at me and told me not to worry…  And then they didn’t move!!!

Again I glared at her, wondering to myself whether or not I should be bitchy… the boat had a Texas hailing port… Good thing or bad, not sure…

When it looked as if they weren’t going to move, I yelled out that I wasn’t really comfortable with how close they were…  She agreed and eventually convinced her husband to move.  Now I’m not opposed to boats in close proximity in a crowded anchorage… but there was a LOT of room elsewhere and the short distance between us and the shore was not a good spot… 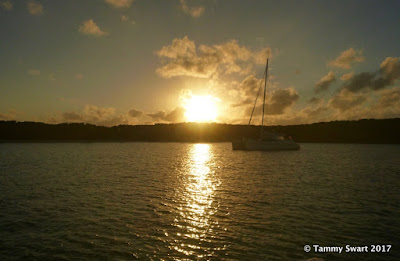 By the time we finished our work, we were exhausted and although I felt badly that we weren’t being good hosts… we didn’t have the energy to go ashore.

So we let the sun set on our opportunity to re-experience one of our favorite places in Puerto Rico.  I can’t help feeling somewhat “responsible” toward Adventure Us 2.  I know I’m not really, but I just want them to have the same magical time as we did…  But I’m learning quickly that sometimes you just can’t go back and recreate those times that happen so unexpectedly…

By nightfall, many of the boats had gone leaving the anchorage once again quiet.  With no internet we were forced to resort to reading or quiet conversation.  We relaxed in the cockpit as the stars came out and the frogs called from the island.  The swells calmed somewhat and we could hear the occasional larger wave as it met the sandy beach nearby.

I had forgotten the stars.  We could see them from Salinas but here… here they were ALL out!  I wish I had a camera good enough to capture this beautiful night.  Today the anchorage was a zoo… but tonight all is redeemed…  And tomorrow we leave Puerto Rico, maybe forever.