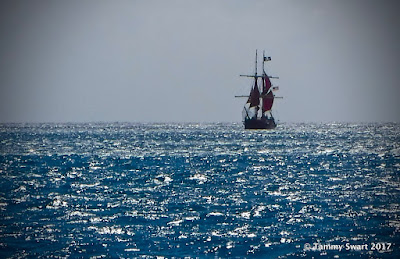 Did I mention that we have a Buddy Boat?  Well, we do.  Adventure Us 2, Janet Lee and Michael.  They are from Texas and we met them when we passed through Kemah back in 2013 in the very beginning of our Cruising career.  So because we like them and (obviously) because they are from Texas… we’re trying out the Buddy-Boat thing. 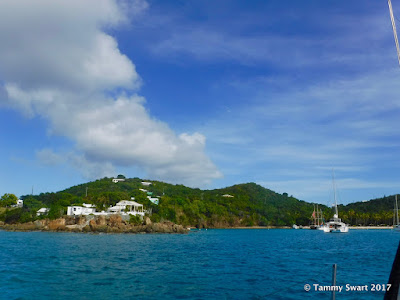 We don’t know how to do it… there are so many pitfalls and unwritten rules… we’re just figuring it out as we go and I guess you could say that we are in the Honeymoon Period.  It’s that time in any relationship when everything is brand new and shiny… We are getting along well and seem to like a lot of the same things…  The things that we don’t like to do together, both couples are happy to do individually…  Sounds like the makings of a great relationship! 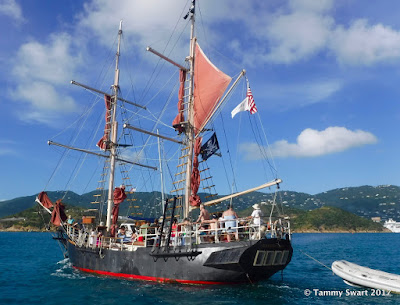 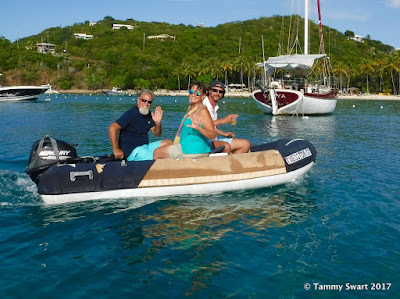 Where better to begin your Boat Buddy Honeymoon than Honeymoon Beach!???Being the Activities Director for our group carries a certain amount of pressure.  I’m such a planner (can’t stop) that the job fell naturally to me and I take it seriously.  I want us to be comfortable and have lots of fun stuff to do, find all the provisions and supplies we need and all the while taking into consideration the weather and sea conditions… It’s like doing a puzzle…  And it’s fun!  But when I’m wrong….

I will admit that I thought the anchorage at Lindberg Bay would be smoother.  I thought Honeymoon (Druif) Bay would be more rolly because it was pretty much so during our last stay… but with the winds being more NE or ENE and the waves coming from NE, it was not bad at all. 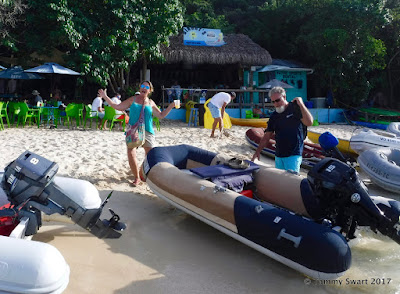 We settled in our same-old-spot as last time and AU2 found a nice place just behind us.  JL made some Facebook contacts and lined up a pot luck for us to attend on Sunday so we were free to hang out with MeNorah, another Texas Cruiser… at Dinghies on Saturday afternoon. 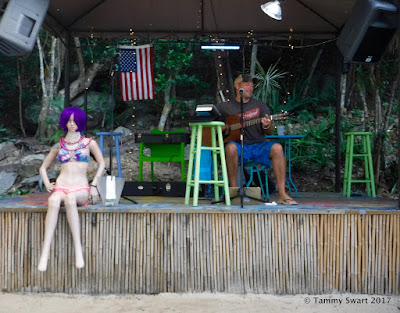 There was a one-man-band playing and we dug our toes in the sand (teaching JL that this is a no-shoes-required event) and enjoyed the sunset.  I marveled at seeing the world in real life as I remembered the sunset being in a completely different place when we were here in the early summer… 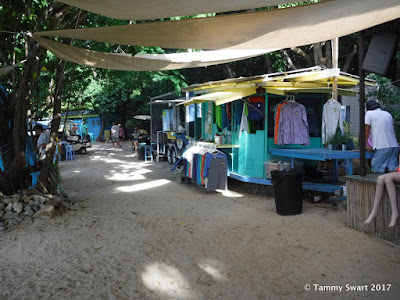 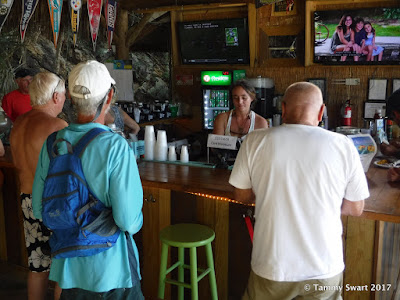 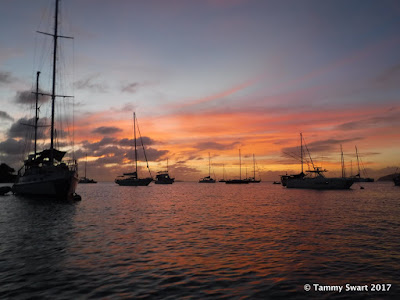 Bruce and I left AU2 on the beach and went back to the boat to enjoy the last of the sunset our way.  Settling into our routine, we were up early and got the housekeeping out of the way.  I made a big batch of potato salad for the pot-luck scheduled for mid day. 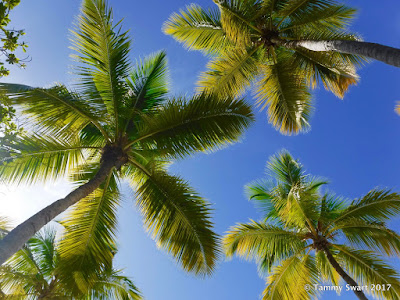 So who are these people and how did we get invited to this pot luck?  AU2 met a couple way back somewhere last year and they are here.  They have a daughter who is turning 18 soon and they planned this as a surprise birthday party for the daughter.  So we, and various other random people, showed up to this young lady’s surprise party on the beach.  Cool! 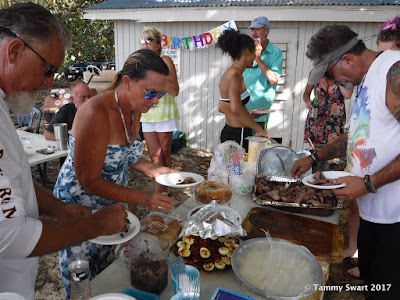 Somebody made a delicious hunk of brisket and people just pitched in the sides and desserts…  It was great fun and we met some new folks…  locals and cruisers.  I spoke to the Birthday Girl briefly before the party broke up and thanked her for celebrating with random strangers, us… and she said that it was the best kind of party.  Boat Kids are great! 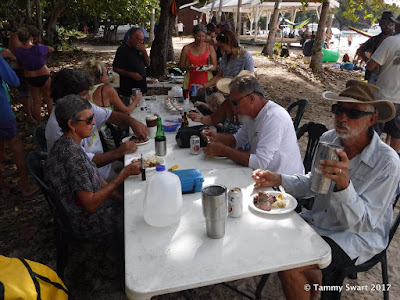 After everything was cleaned up and the party pretty much dissipated…many of the attendees migrated back up the beach to Dinghies where there was live music and another big party going on.  Bruce and I bowed out and returned to the boat but AU2 went down there to listen to the music and watch some sports on TV… 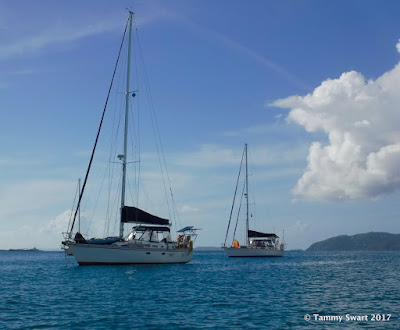 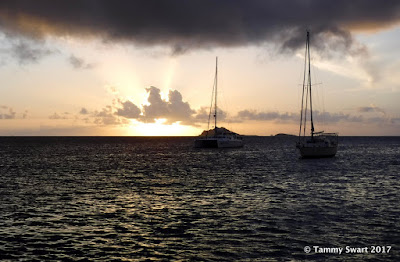 We could hear the music loud and clear out on the boat so we had our own sundowners and a nice dinner alone.  I added peanut butter to the Coquito recipe and it was to-die-for!  No need to pay $10 plus for a tiny drink ashore when I can do much better myself for a fraction of the cost… and no crowds!  And it was nice that neither of us felt compelled to go along with the other… we just did our own thing.


The following morning we listened to the weather and decided that we would move on over to Long Bay in Charlotte Amalie, St. Thomas… but we had time for a short hike up the hill to take in the view.  The steep hills provided the perfect exercise for us and it felt nice to get our bodies moving after our sedentary summer…  I much prefer real life activity to just exercising alone…  And this hike, although short, provided some stunning views of the surrounding area. 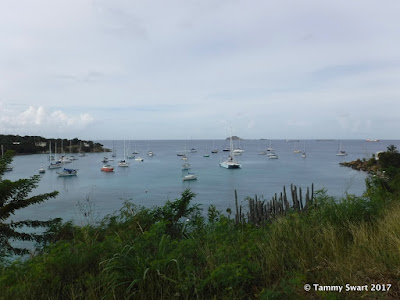 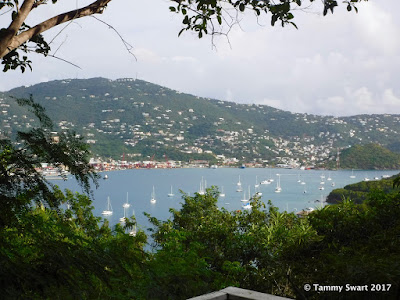 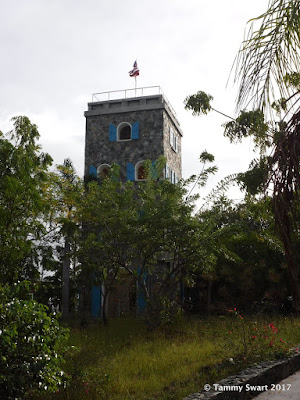 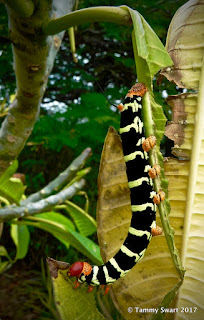 Continuing on, we found lots of “greenhouse plants” just growing wild.  The Plumeria along the way were stripped of their leaves… I wondered if it was caterpillar season… and found soon that it was indeed.   These little guys, the Frangipani Hornworm, are voracious and will strip the plant entirely before moving on to the next plant.  I guess it all works out because we’ve seen them in years past and the Plumeria are still here and still thriving.  I wonder what kind of butterfly they will be… 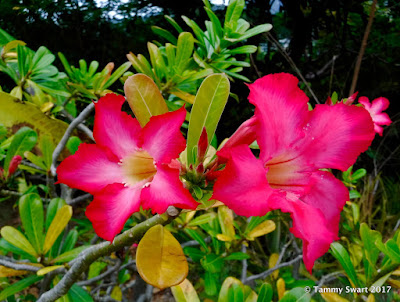 When we reached the top and made our way around to the other side of Water Island we were treated to a stunning vista of passing rain showers.  Soon the showers made their way to us and we took shelter beneath some trees for a short time, then continued on in a light sprinkle. 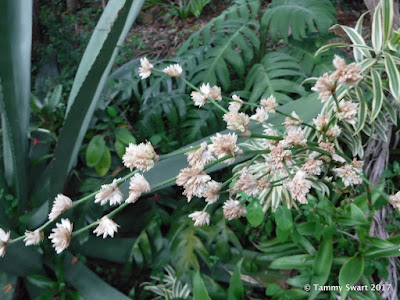 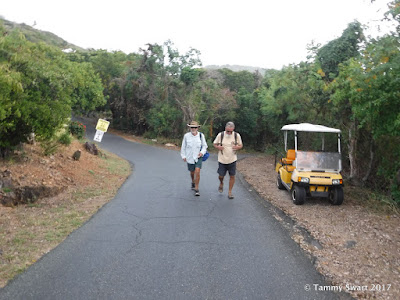 When we got back to the road leading down to the beach again, the sun was shining once more.  So our honeymoon is progressing nicely.  Janet Lee and I have found lots to chatter about, and our men seem to be getting along as well…  I’m so happy to have another girl to talk to and even more happy that Bruce has an outlet for his “man-talk”.  It’s a match made in heaven!