Whoopin’ It Up At Skinny Legs

Well if you’ve interacted with us much lately you would know that “Whoopin’ it up” might be a bit of a stretch…  Cruising Life has changed us in many ways and to be sure, we are far more laid back than we ever were back in our previous lives… 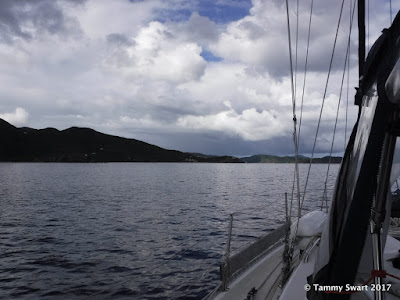 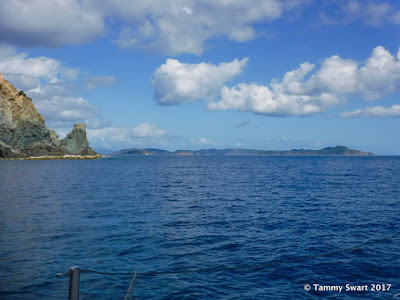 So after our hike at Little Lameshur (I just love saying that) Bay, we pulled anchor and motored around the corner of St. John to Coral Bay.  Adventure US 2 found a spot to drop anchor right away but I was more discriminating… 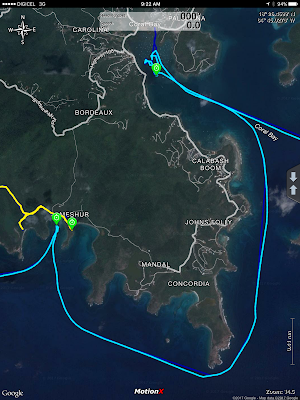 I circled and wove my way in and out through the other moored boats in a lame attempt to find a spot closer in and in more shallow water.  Unfortunately, I didn’t want to be that fathead that barged in and plunked myself down way too close to the other boats… so in the end, we parked right behind AU2 and were perfectly happy.

After a short rest, we joined JL and Michael in their dinghy and went off in search of the famous Skinny Legs.  This was the first time here for all of us but it was easy enough to find the place.  It’s pretty much the only thing here!  The dinghy dock was packed but even as early in the evening as it was, there were few available tables left.  Fortunately there isn’t a bad one in the place! 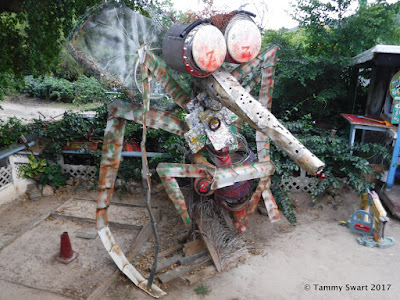 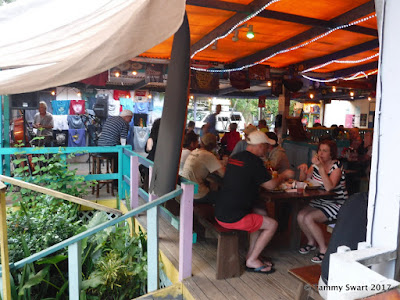 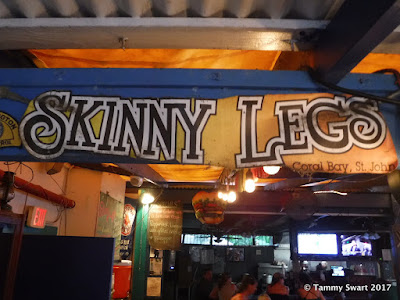 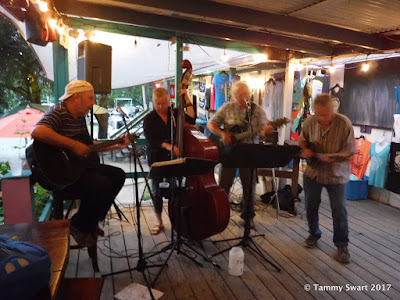 We settled where the guys could see the big TV screens above the bar, and JL and I could keep an eye on the band as they sat up in a clearing nearby…  This was why we were here.  The Hot Club of Coral Bay.  One of the singers in this semi-local band went to school with JL and of course we couldn’t miss his performance.

Truthfully, it isn’t often that Bruce and I get off the boat at night and we were a tad bit reluctant… but we are glad we went because the band wasn’t anything like what we’re used to hearing at clubs these days.  It was a funky blend of popular old songs but with a Folk/Swing style that had us singing along and almost dancing! 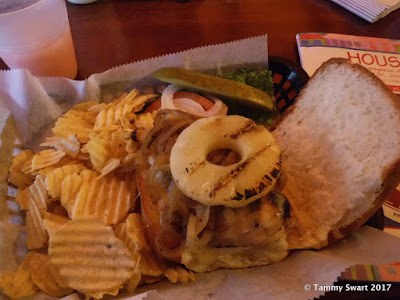 We enjoyed huge burgers and chips, great drinks and awesome service along with the entertainment and even after we were done eating, we gave up our table and moved out to the sand box to listen some more…. 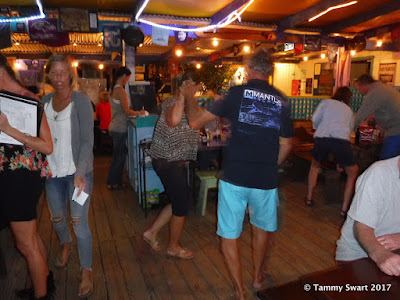 JL and Michael danced a bit before the end of the first set, then we had a chance to meet her friend and listen while they recapped the intervening years since they had last seen one another.  Turns out the guy had been living half the year in Austin, TX and the other half here in USVI playing in the band at Skinny Legs for 15 years. 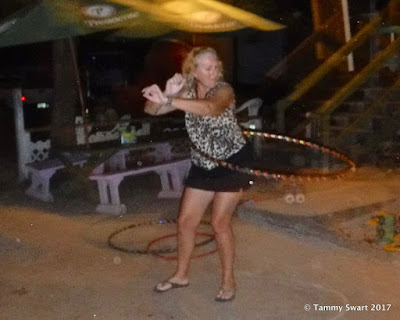 Although Bruce and I didn’t dance, JL and I showed off our Mad-Skills on the hola-hoops we found scattered around the sand box.  I am happy to say I’ve still got it! 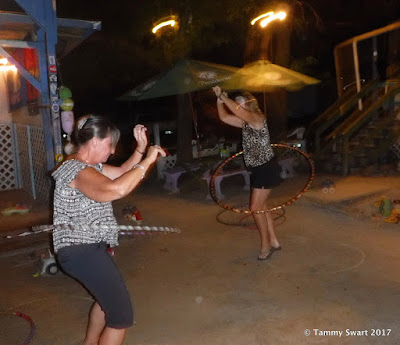 We listened until the band was almost done and things were winding down.  Out in the anchorage, ours were two of the few boats with anchor lights on so it wasn’t too difficult to find our way home. 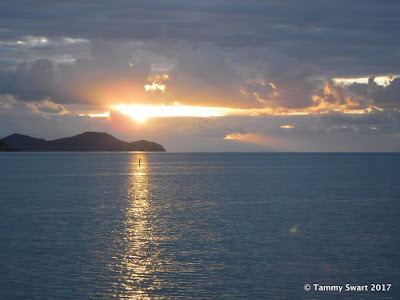 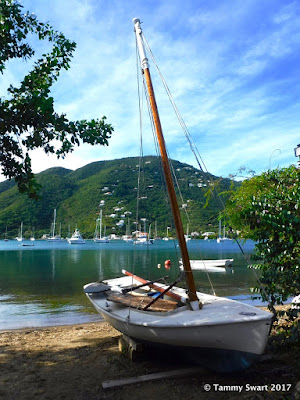 We found the place nearly deserted but a passing bicyclist told us that there were no busses running on Sunday…  Well!  That’s it then.  We pulled up our anchors and took off!  One more stop in the USVI and it’s BVI bound! 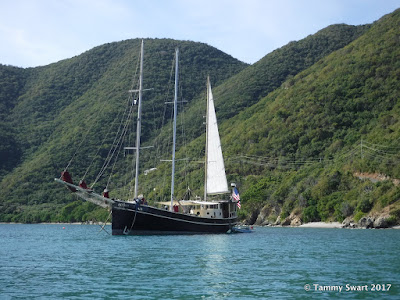 We could easily have made it over the handful of miles and cleared into the BVIs same day… but last time we showed up past 3:30 pm we were charged an extra $15 for “overtime”. 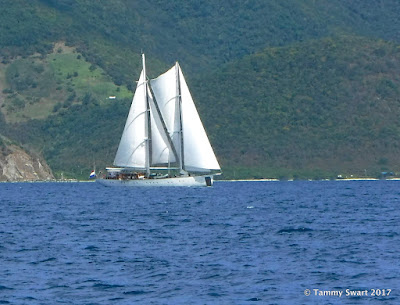 So we positioned ourselves in the beautiful Francis Bay and picked up a mooring ball.  I know, I know… to save $15 we paid an additional night on a mooring ball.  Makes no sense. But our cost was only $13 with the National Parks Pass... 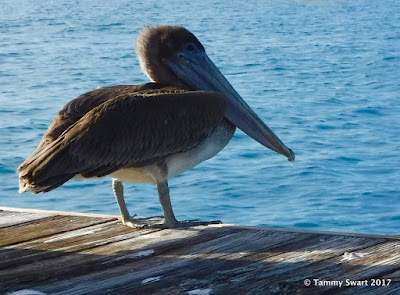 But it’s the principal of the thing, and as it turned out, we had a chance to meet our sister ship, The Islander… another CM45.  AND we ran into Southern Girl and Island Dream.  It was like old home week in Francis Bay! 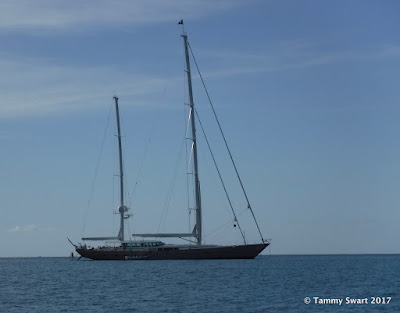 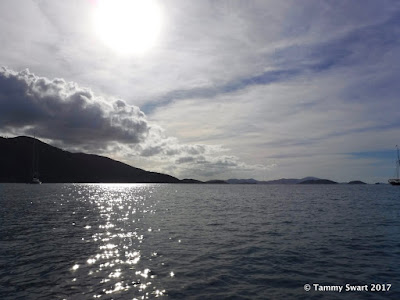 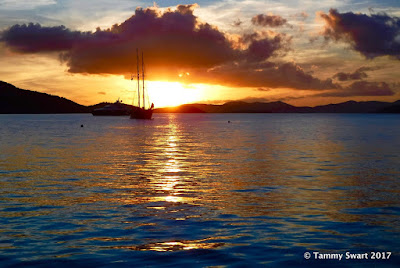