We Aren't The Greatest Boat Buddies...

It wasn't just the Christmas Winds keeping us pinned down in Ensenada Honda for a MONTH!!!  We were also kinda-sorta waiting for another boat to get their chance to catch up with us before we moved on.  Well they finally made it to Culebra and after a couple of days hanging out with them, showing them our favorite haunts and such... we left them.  Some great Boat Buddies WE are, right?

OK we're terrible Boat Buddies... but we're a work in progress!  And we had to get out of there!  Yes, we've loved every minute of our time in Culebra but we get these itchy feet, you see...  Suddenly we are ready to go!  Sometimes it doesn't even matter what the weather forecast says... And today was questionable.

We had mentioned to Adventure Us 2 that we would go if the winds weren't honking in the morning... and they were kind of honking.  Add to that a procession of fast-moving squalls and we could easily have decided to just stay put... But Itchy Feet, remember?

So about mid morning, before we even had breakfast, we shooed Jezabelle out of our bedroom and started hauling up the anchor.  Our friends aboard Corta' Ito were doing the same, only they got gone before we did...  You see, their anchor hadn't been in one place for as long as ours had.  We found an astonishing amount of plant-life growing on our anchor chain and snubber gear.

While Bruce was working on cleaning off the ground tackle, I noticed that our alternator gauge was kind of having little fits instead of giving me a strong reading... and our tachometer was quivering.  Not good.  I mentioned this to Bruce and he quickly disappeared down below to take a look.  It was a quick fix however, just tighten the alternator belt and we were good to go again... Then the cloud appeared.  We consulted radar and decided to just be reasonable for a minute and cool our heels while the rain passed.  Besides, it gave us a chance to have breakfast! 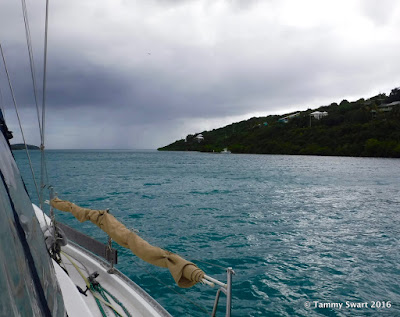 Soon we had the anchor up, the alternator was charging along and our tummies were full as we motored at a slow pace out of the anchorage that had been our home for a month.  Have I mentioned that we've been here for a MONTH???

Another squall slipped past us bringing gusty winds and a few sprinkles but by the time we reached the gap in the protective reef it had passed... 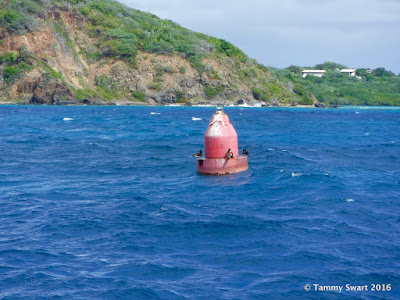 The winds were anywhere from 12 knots to 24 with a few higher gusts in the squalls.  After each squall passed the winds would be very light for a bit, then it would start again.

Even with the forecast calling for winds 17-20 knots and seas to 8 feet, we were banking on the wind direction being in our favor.  Coming from the NE the wind driven waves would have to leap over a small island and a lot of reef to get us.  There was only a short distance that we might get bigger waves and we were OK with that.  Jezebel did not get a vote.

Our gamble paid off with only about ten minutes of waves about 2-4 ft. then they calmed down to a choppy 1-2 ft for the rest of our very short route.

The 5.5 mile distance that should have taken us about an hour took almost two due to some adverse current, and wind and wave being on the nose.  But we powered happily on with stunning views all around us. 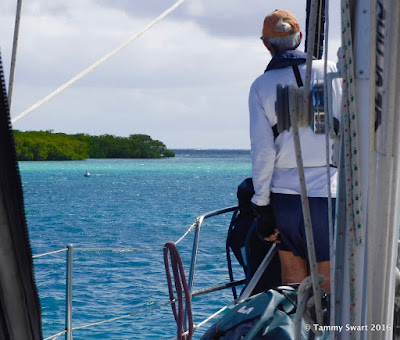 Today is the first time we've visited this anchorage and there's always some level of anxiety with every new place.  Maybe that's what makes it fun... the thrill of possible doom.  We had no real idea how conditions would be, only our best guess which... today... paid off!

The channel leading into Manglar Bay was easily visible and all we had to do was avoid the light colored water and stay on the flat ribbon of deep blue that led us into even more sheltered waters.


We made the sharp turn to port with Bruce on the bow but it turned out that his vigilance was unneeded... It was a piece of cake with depths greater than charted and again, obvious shallow water easily avoided.  We picked out a mooring ball about mid-way between two groups of power boats and did our thing. 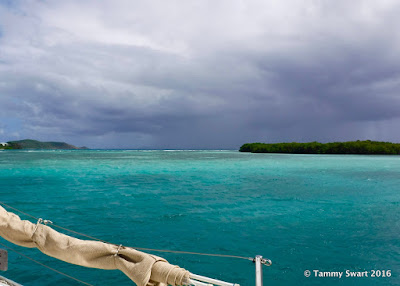 We've become quite proficient at catching a mooring ball with little verbal communication needed.  Even with the high gusty winds we had the boat secured in no time leaving us free to gawk at the incredible beauty surrounding us.

As soon as we got settled the aforementioned squalls resumed their march.  We were all thankful of the cozy reef just in front of us.  Ensenada Honda provides adequate protection but the wind can kick up some decent wave action where we were anchored.  THIS is heaven in comparison.


We spent the afternoon filling our water tanks, almost empty in anticipation of our planned move to cleaner waters...  I tried to read but kept being distracted by the ever-changing scene before my eyes... 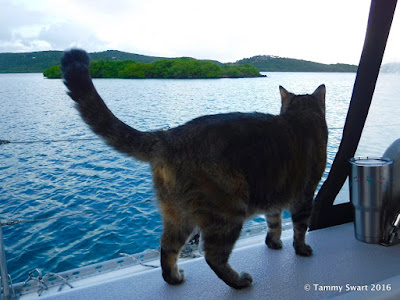 Did I mention that Jezabelle wholeheartedly approves of our move... now that it's done?  She made several turns around the deck with lots of lap sits and chin scratches in between...  You can definitely tell when your feline crew is happy!


Oh yeah what about our Buddy Boat?  They decided to remain back in Ensenada Honda for a couple of days to see more of Culebra.  This is their first time here and we are happy to wait over on this side for them to meet up with us... 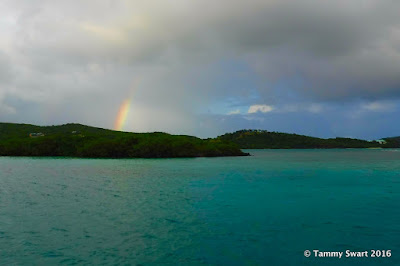 Like I said, we're new at Buddy Boating and the first rule for me is that we aren't joined at the hip.  We are both free to make our own choices and do our own thing when the mood stirs us... We will see them again soon and continue on happily. I think we're going to like having another couple to share adventures with for a while.... soon. 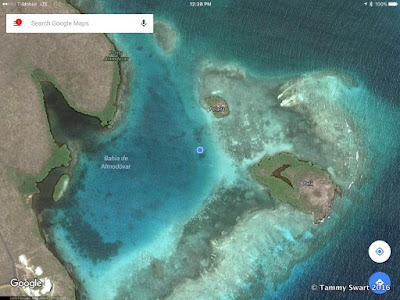