The Hike To Nowhere

Somehow, no matter how much time you have… it just isn’t enough.  There will always be time constraints…  Today it was two things.  One, we wanted to get to Coral Bay by Saturday evening to see an old school chum of JL’s perform in a band.  How random is that… to find out that someone you haven’t seen in almost 50 years was playing on some island in the Caribbean where you just happen to be??? 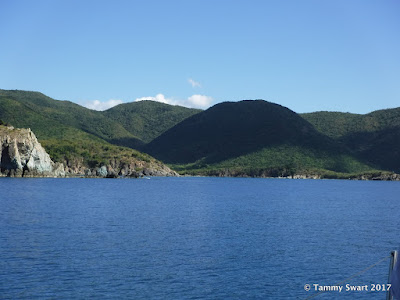 The second time-related-issue was mine.  I don’t know what will happen with the Affordable Care Act in the near future, but for tax year 2016 we will have to pay a penalty for my uninsured status… even though we are “out of the US… “.  Unfortunately we aren’t far enough out… Territorial Waters count as being “in” the US, even though residents of the Territories are exempt… don’t get me started.  So… what this means is that I have only 35 days to remain in Territorial Waters before I MAY have to pay a penalty for 2017 tax year.  We’re OUTTA HERE! 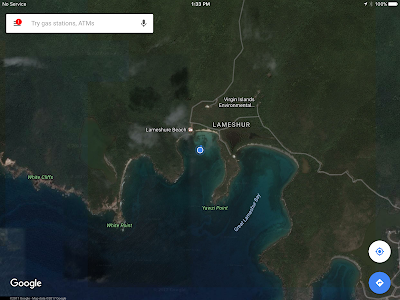 So for these reasons, we bumped along the south side of St. John with purpose, stopping only at Little Lameshur Bay for a night before moving on…  But what a delightful interlude it turned out to be!!!

The pressure I always feel as we race toward the elusive open mooring-ball-of-choice was once again unnecessary… We pulled into the smaller and more desirable of the two bays to pick the two best spots closest to shore. 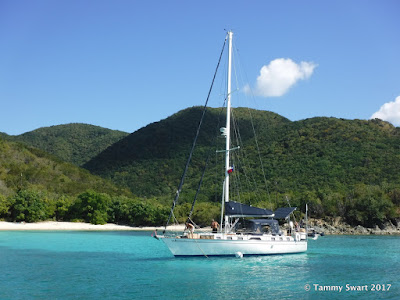 The water was that stunning aqua color we love over a sandy bottom near a cute little crescent beach.  There were tourists arriving by car throughout the day and the remaining three mooring  balls were taken by mid-afternoon, but there was still the feel of privacy here and we congratulated ourselves on our speedy arrival to this paradise.

Fatigue was catching up with us due to our grueling schedule (joke) and we spent the afternoon lazing around and making water after a quick trash run to shore in the dinghy.  A National Park Volunteer came by toward evening to answer any questions we may have about this anchorage or St. John in general.  What a nice service! 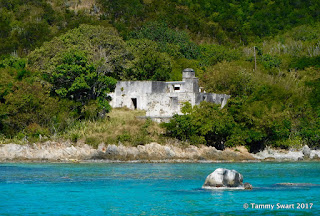 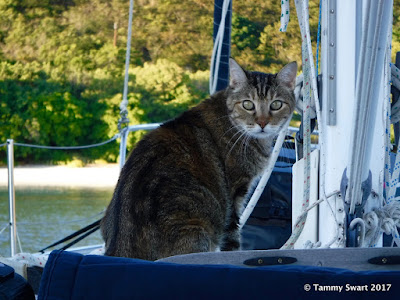 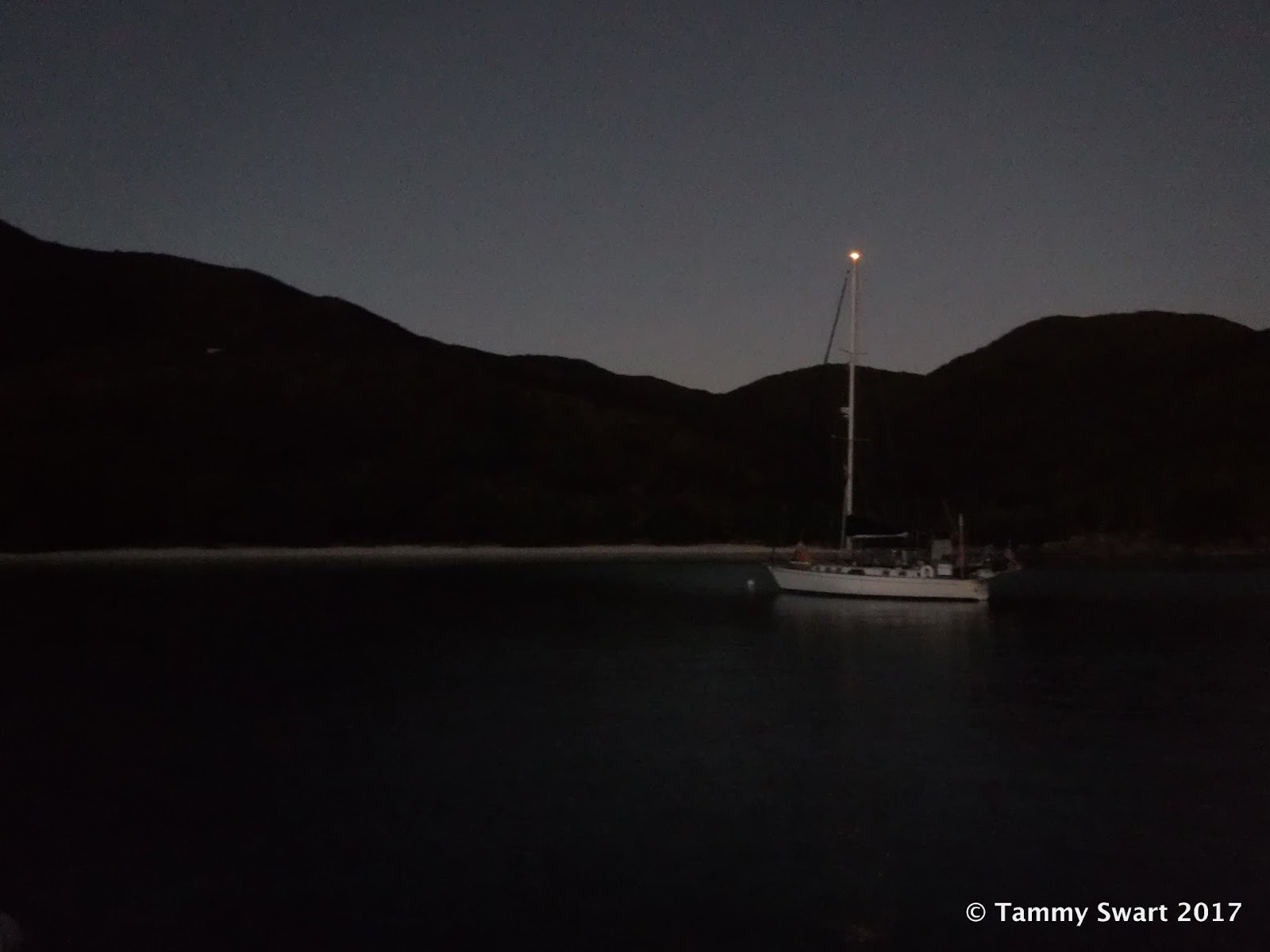 Once again the beautiful night sounds and stars provided a fertile environment for sweet dreams.  Dreams made even more sweet by the discovery that we do NOT have a leaking water tank after all… we are just idiots!  Long story short, (that failure to communicate) we left a faucet in the open position and the water pressure switch on during the ill-fated run from Charlotte Amalie to Christmas Cove.  Today we discovered that the tank was holding water just fine… we still may have another issue, but it ISN’T a leaking tank!  (just wait, this story gets better down the line) 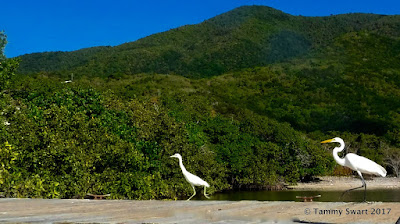 In the morning, we joined our friends on AU2, first to confess our stupidity, then to take off on a dinghy ride around the point to the dock in Lameshur Bay.

We paid our mooring fee and set out to find the petroglyphs that appear to be about a mile away up the mountainside as the crow flies, but to our dismay, 2.2 miles along the hiking trail.  The trail that climbs up over 500 ft. in elevation before descending to the site on the other side of the saddleback in the hills…

We enjoyed the hike and did our best but we only made it about 1.4 miles uphill before giving up.  We were only halfway there with the return trek still ahead of us… no way we were making that hike. 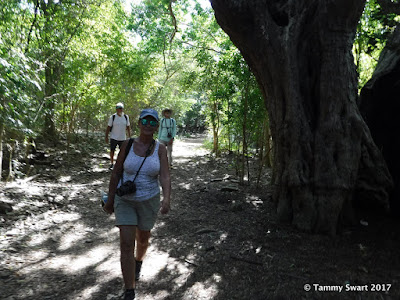 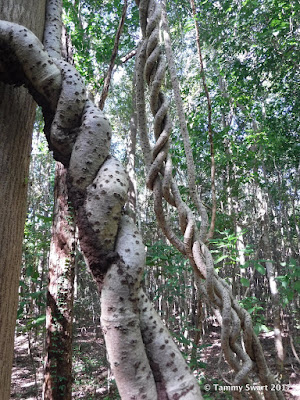 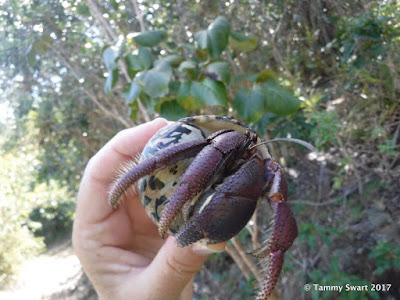 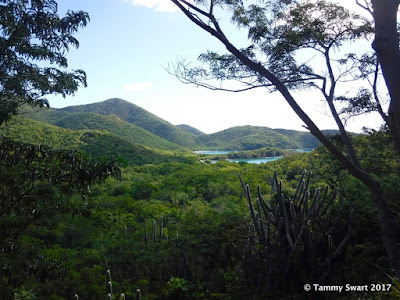 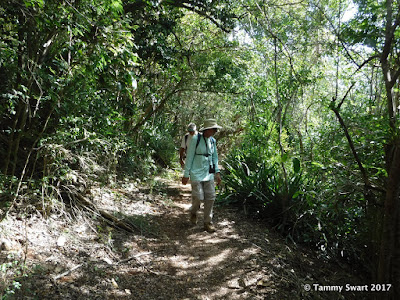 So we resigned ourselves to the fact that this was the “hike to nowhere” and backtracked to take one of the spurs, another .25 mile one way, to see the next bay over. 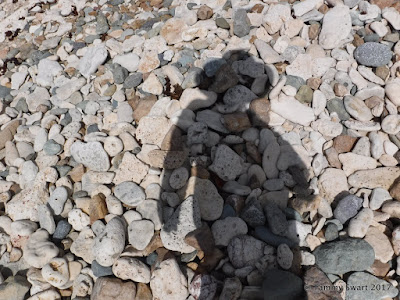 It was deserted and there were rocks for me to climb… Always fun.  What a view!  But my legs were beginning to be a little bit untrustworthy so I came back down before I did it involuntarily the hard way… 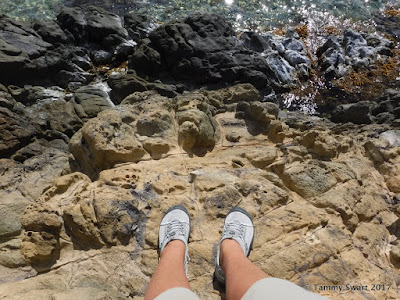 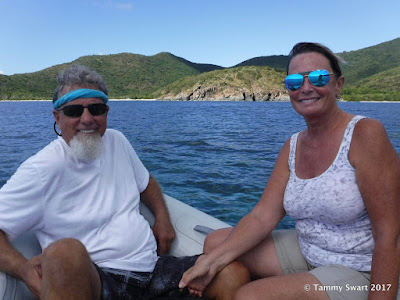 We returned to our floating homes and departed just after lunch for Coral Bay!