It must be done.  I’ve gotta do it.  Yes, I can do laundry in a bucket on the boat… but people, that’s hard work!  There will be plenty of days in which the bucket is my only choice, so when we find a laundromat within laundry-bag-toting distance, we take advantage of it.

Sometimes I reminisce about the days when we had lovely stacking machines in our kitchen.  I could just pop a load into the washer while making dinner and it would be dried and put away before bedtime.  No stinky bags of fermenting locker-room smells ever invaded my home back then…  not like now when the length of time between wash days can be measured by my nose!

Ahhh but this is my life now and I chose it willingly and knowingly for the adventure!  And yes, even laundry is an adventure sometimes. 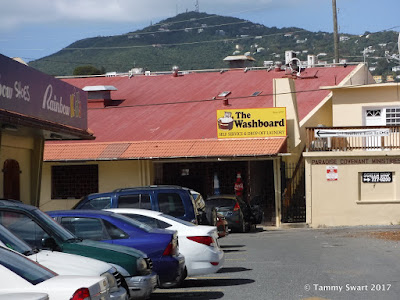 There is a laundromat here in St. Thomas just across the street from the Pueblo Grocery and about a block away from the dinghy landing at Yacht Haven Grande.  It doesn’t look like much, but it extends far back into the block and has quite a few machines of varying types and ages.  We popped in to check it out on our way home from K-Mart yesterday so we would know what to expect…

Many times I find myself visually taking in a new place and I find it falls short of my expectations.  But these are the OLD expectations.  Those of my former life when I lived in an insulated bubble.  Nothing unclean or un-beautiful was allowed inside my bubble. I now live inside a completely different sort of bubble where my expectations have changed.  For so many things.

I left that laundromat almost dreading the return there with my bags of laundry… but it must be done.

Upon arrival today the place was bustling.  It was mid-morning on a Monday, MLK day in fact.  I don’t know if it being a holiday made any difference but the place was packed!  I could see that a few of the big-load machines might be coming free soon and several regular sized washers had their lids up, indicating that they were free.

I mentally took stock of what I had… Two double (or triple) loads and one small dark load.  I recalculated the double loads after realizing that there were two women in front of me waiting for the big washers.  I went up to get some tokens and the attendant told me that it would be best to find the machines first, then purchase the tokens… as different washers require different types of token… but the dryers all took quarters…  It was a bit of a scramble, but eventually I had everything sorted into five regular-sized washers spread throughout the laundromat… I placed my laundry bags on top of the machines so that I could remember where my clothes were!!!

I went back up to purchase my tokens and asked the man if there was hot water.  He blinked at me… of course there is hot water.  I explained that in many of the places we had visited, there was no hot water available for the washers so it didn’t matter what machine setting we used…  He said “that’s a shame”.  So now my expectation of hot water has become an extra-special-treat!  Ha!  I took my tokens to my machines and got them all started.

Many times, after seeing a place for the first time, my initial interpretation of what I’m seeing somehow changes.  My “emotional image” of the place changes from seeming disorganized, dirty, grubby and unwelcoming to a more comfortable thing.

It’s strange really.  It’s sort of like I can actually internally witness my horizons expanding.  Sometimes within minutes a second look at the same scene will yield a different feeling.  A more comfortable one in which I can now see order and maybe even beauty in the chaos.

I’m not sure if I’m explaining it in a way that you can even understand, and maybe it’s just me…  But it’s like with the first glance, a place is bad.  It’s not someplace I would have allowed myself to remain in my former life.  But since I must, my mind adjusts my mental image of the place to be more acceptable to the “me” that lives inside my head.

I remember once my Junior-High School aged daughter proudly told me that she and her friends had gone to the mall and back on their own without "bothering me" for a ride… by taking the city bus!  I grounded her for a month!  WE don’t use public transportation!!!  It’s dirty and dangerous!!!  And now Bruce and I use it all the time.  We are appreciative of its existence, the economy, the ease…!  My views of life have surely changed.

And so I comfortably sat in that foreign laundromat, watching the people there go about their daily lives.  A small boy was really giving his dump truck a workout while his beautiful mom did the chores…  Her hair was wound around inside an iridescent green fabric and I found myself wondering if it would be rude to ask about her hair.  I decided it would.  A man with salt-and-pepper colored “corn rows” (is that the politically correct name for it? I mean no disrespect...) folded laundry continuously and I realized he must work there… they do drop-off service.  I wondered if it would be nice to tell him that I loved his hair or if he would have been offended… I decided he would be offended so I kept my silence…  But I would have loved to have taken pictures of it all…  Out of respect to the patrons, I did not.

While waiting, I noticed that two ladies were adding Fabuloso to the laundry during the cycle and I asked about it.  Even the men chimed in that they use it all the time, some in the soap cycle and others use a smaller amount during the rinse cycle…  I did not know that!!!  I use Fabuloso for LOTS of things on the boat.  I love it!  Maybe I can add it to my laundry regime…  It’s relatively inexpensive and has been available everywhere we’ve traveled to far…  Learned something new today…

When my washers began to finish I was happy to find the dryers were freeing up as well.  Many of the patrons were finishing and departing one-by-one, leaving the place a lot less frenzied…  I divided my five washers into three big dryers and popped the quarters in.

Back at my seat beside Bruce, Michael and JL… I was warmed by the sunlight coming in through the cast-iron filigree of the storefront…  A sparrow seemed to be watching me and with the decreased activity inside… she decided to come on in.  She flew in and sat on a wheeled cart until someone walked her way and she returned to the entrance.  She cheeped and squeaked and flitted about.