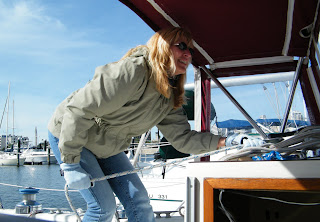 I had watched the weather reports all week in anticipation of getting some sunshine this weekend. It looked like it would be cool, but sunny with light winds. Bruce and I packed ourselves off to the boat on Saturday morning in light jackets. 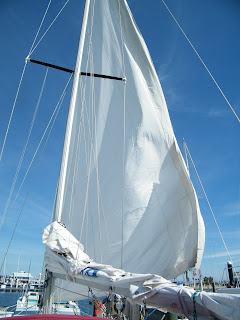 It was so nice to be out on the boat for a weekend away. We had to put a jib up first, but that was the only chore. The winds were still blowing out of the North so I stayed behind the dodger and worked down below. 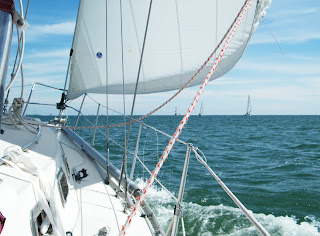 We were soon ready to join the parade of boats all heading towards Port Aransas. It was a fast and beautiful sail all the way with the current helping us along. 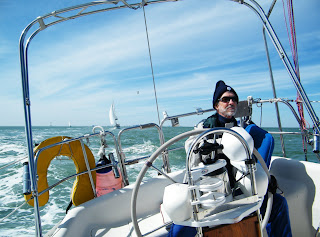 There was no formal race, but of course, if there are two boats on the water going in the same direction... its a race! Bruce had made the perfect choice of sail and we were catching up to boats all the way. Bruce was a happy guy! 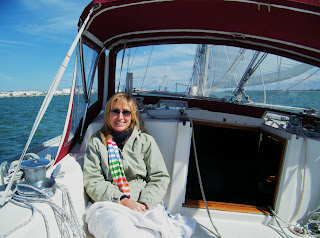 I was chilly, but it's nice to see him enjoying himself so much. OK, so he looks like a thug in that get-up, but he was having a blast. 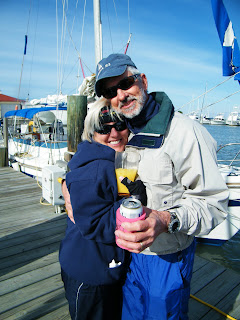 We had reservations in Port A on the "long dock". This was a treat for us. It was our first time back in the Port A Marina as transients after leaving there nearly a year ago. The "long dock" was the place to be. We took our place alongside the dock and I jumped off the boat to socialize while Bruce got the boat all tidied up. Then he grabbed a beverage and joined us. We met up with friends, Brenda and Mark, whom we haven't seen since last year... OK it was just a couple of months ago, but it sounds more dramatic that way. 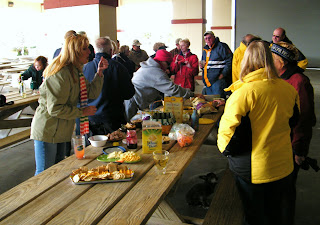 After a lengthy vigil on the dock while we awaited the arrival of the last boats in the unofficial parade, we all gathered under the protection of the Port A Pavilion for an appetizer happy hour. We hadn't had lunch and I was starving. Although none of this stuff was on my diet, I found a few tidbits to gobble. We had dinner plans for 5pm so we didn't need to eat too much. 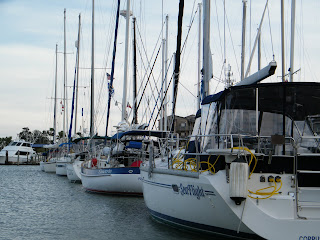 It was so nice to be back here in Port A... even if it was a bit nippy. It's always so peaceful and "marina-y". Even though it's close to home, it's like being somewhere else. 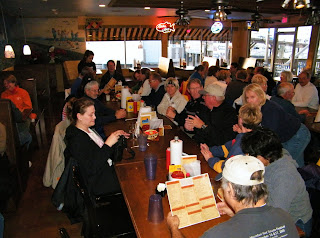 Everyone put up the snackers and we all walked over to Fins, a local eatery right around the end of the marina. Now I would not say that the food was good enough to come back again, but some like it and it's within walking distance from the docks, so I would imagine it's a "Frostbite Cruise" fixture. They were very nice and accommodating and let us take the place over and for that I give them high marks. Now, had it been the middle of summer when they were likely to have had other patrons, the story might have been much different. 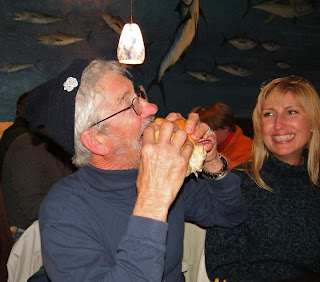 I ordered a salad after all that junk food I had scarfed earlier. Bruce had no such restrictions on his diet... Now THAT'S a burger. I think he might have injured himself eating that thing. 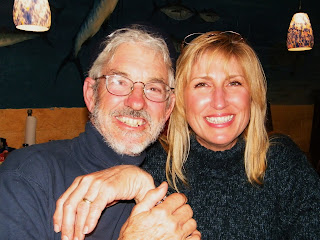 We ate and laughed and had a good 'ole time out, even if Bruce did look thuggish in his hat. That's my classy man! 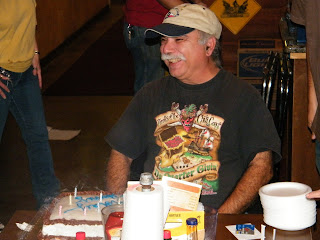 The club celebrated the ___th birthday of our Commodore, Harry. He's so cute and looked so pleased with all the hoopla. He's new at this "Commodore" stuff and seems a bit shy at times. I'm sure he'll warm into it. Anyway, the cake furnished by his lovely Linda was a big hit and a perfect finish to our dinner. We all made our way back to our boats. Some went by way of "Shorty's", a local pub, but we avoided the smoky barishness and hit the v-berth. We heard some come back in later but it was too late. We were burrowed in. 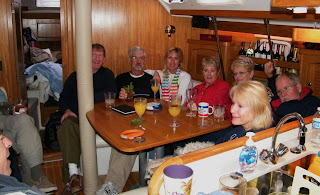 Sunday morning, we were up and disappoint- ment was the mood. It was damp, cold, and sunless! And it looked like it was going to stay that way. We all met up on Sea Flight for mimosas and Bloody Mary's courtesy of Mark and Brenda. It was the best way we could think of to wile away those cold dreary hours waiting for conditions to become more favorable for our departure. 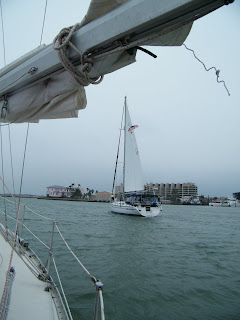 More favorable conditions were not to be. We broke up at around 11 am and everyone went about the business of getting themselves ready for the sail home. We followed Sea Flight out into the Ship Channel where the current was against us the whole way. The birds were even subdued in this cold drear.

We pointed our nose towards Corpus Christi and I settled in with my blinky and my down coat. The traffic in the channel kept things exciting. There were barges coming and going the whole way, causing the sailors to have to really stay on our toes. 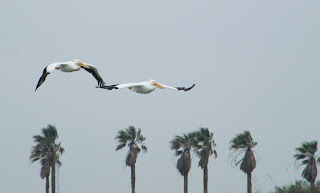 I tried to entertain myself taking pictures, but even that wasn't enough to keep me up in the cockpit. I was soon frozen and when I could no longer feel my feet, I begged to be allowed to go below to thaw out. Bruce seemed unaffected by all this in his joy at being out on the boat. He kept saying things like "we would be thrilled to have weather like this in January back in Kansas". Now tell me why anyone would want to live in Kansas? 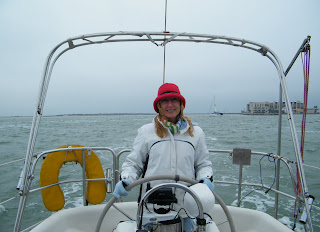 I had to take the helm for a bit so that Bruce could adjust sails, then I went down below and bundled up for a nap. Next thing I knew, we were near the gap back at the Marina in good ol'e CC. It had been a great weekend and good to be out on the boat again, but I'm for no more "frostbite". C'mon SPRING!