Bruce and I had a lot of things to do this weekend, but the weather was fine and there was a pursuit race happening on the bay. It was the first in a series called the Frostbite. The day was warm for January, the winds were light and there was a chance of fog. Bruce and Steve went to the boat early to get things ready while I did some of the many errands I needed to get done. 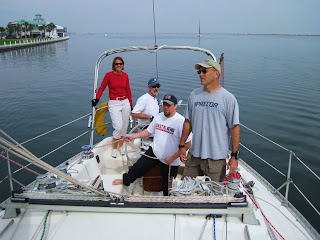 I got to the boat just in time with the crew all there. It was a pleasant surprise to see Clay grinning at me from the cockpit. Long time no see...
We got the boat going and found only 3 other boats going out. It was a bit of a disappointment but it turned out to be such a nice sail even if the racing was less than competitive.
We got a poor start with the light winds on the nose. It isn't often we race in these conditions so it's difficult to judge the time to the start line. We tacked many times inside the breakwater before we even got to the gap. Poor Brett was being beaten up by the big 150 Genoa sail.
Once outside the gap we tried to head towards the only mark in this race, #2. The winds were so variable and light, we couldn't even begin to make way in the right direction. At this rate it could take us all day. There were two light race boats out in the lead early on and only one other cruiser back where we were. We just had to beat the Cape Dory, Kerry Ann. 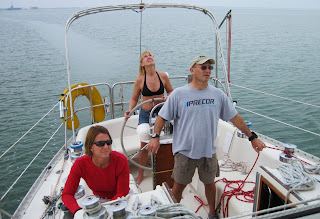 Bruce put me on the wheel while he went to foredeck to get the spinnaker up. There was a bit of a snafu when the sail went up, but it was on sideways. This is not good for sails. Hard to trim that way. So to the sound of Steve predicting a "Blind Hog" nomination, Bruce and the boys took the sail down, re-ran the lines and hoisted it once again, this time the right way. We began to make way in the right direction leaving the CD in our wake. Jacquie had to remind Steve of his recent nomination for the Blind Hog award to get him to move on to more positive conversation. Poor Bruce... our crew just needs some practice in daylight... that's all. 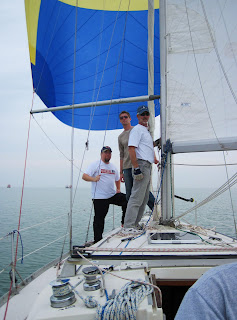 We turned towards #2 and the wind came up a bit to help us along. It was beautiful sailing along behind that huge sail. I even got some swimsuit time while going downwind. 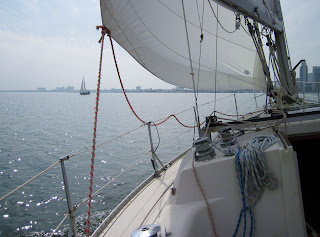 The remainder of the race was uneventful. We rounded the mark and dropped the chute. We took our time getting the Genoa trimmed out again while the two boats out in front neared the finish. The CD was safely behind us so we didn't have to knock ourselves out to secure our solid 3rd place. The sun came out, the winds held light but more steady. It was a fabulous sparkling January day with good friends doing what we love to do. I wonder what the poor people are doing today... 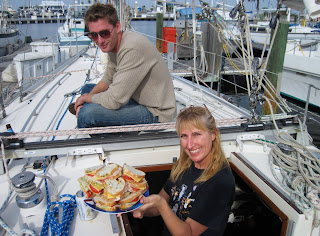 Once back in the slip, I made some yummie sandwiches while the guys put the boat back together. Jacquie took off to get her girl stuff done. She missed a great lunch. I love fixing food for such an appreciative crowd.
We sat around and talked for a while, then everyone went off to do their own thing. Bruce and I had a BYC dinner to attend. We changed and came right back to the marina just in time for happy hour. 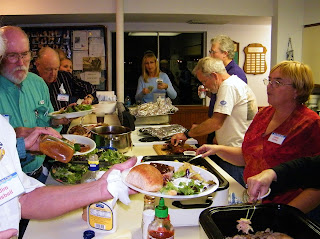 I got volunteered to collect the dinner donations while the cooks served. It was a delicious dinner of pork tenderloin done perfectly with healthy fixin's. We had the usual great time talking sail with our friends. I'm still trying to get down all of the nuances of being Dinner Chairperson. Everybody has an opinion.... 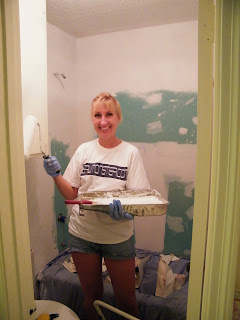 We didn't stay the night onboard Elan because of those chores we had put off to go play on Saturday that still needed doing on Sunday. The biggie was painting my bathroom in preparation for the marble walls to be installed. 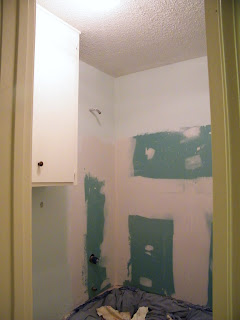 It took most of the day but I love painting so it was OK. The picture doesn't do it justice and of course, there is the unpainted part where the marble wall will be... but it looks great! I am beginning to feel like I was run over by a truck with all the activity this weekend. I need to go back to work to rest!
This year's Frostbite Regatta was misnamed by far... It was a gift of a warm weekend of which we took full advantage. Spring is near... I can just feel it.