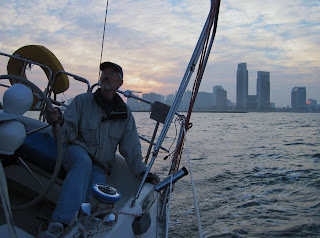 The winter has been uncom- monly cold for South Texas. So much for global warming... no sign of it here. It's been weeks since we went out on a Wednesday night race and we're really becoming excited about the year's boating events This week's weather report finally allowed for us to plan to go out! Let me just tell you... Bruce was a happy guy! 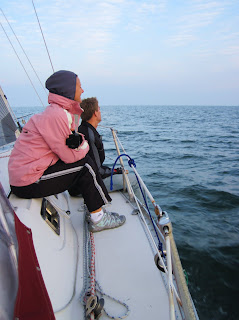 We had the ever faithful Steve and Jacquie aboard, and the new recruit, Brett. It was good to be out there even if the temperature dropped 10 degrees between my office and the boat. 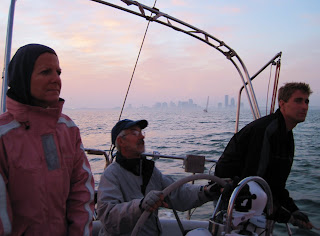 The winds were light enough for me but the boat still moved along happily. Steve was relentless in his efforts to squeeze every tenth of a knot out of Elan. He had the crew working hard. I will admit that this picture proves much more determination and concentration than actually occurred... but it's a beauty! 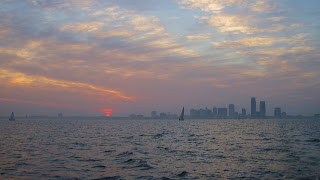 The race allowed me few photo ops of the other racers. There were two courses. The spinaker fleet went much further afield than the working sails fleet. There were few boats on our course. 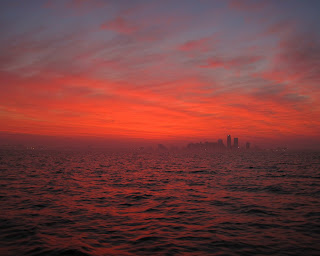 That just left me more time to take advantage of the sights... and what sights they were. I took this one on the way from #2 towards #10. I was actually supposed to be steering the boat, but with the light winds and the ever changing view... I couldn't resist. 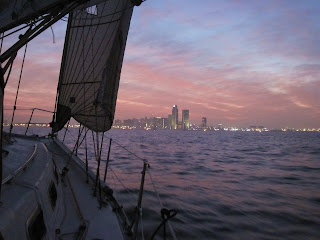 We rounded the second mark and headed towards home. It struck us once again how lucky we few are and it made us feel really glad to be alive. There are so many people who never get the opportunity to experience this beauty. I never tire of it.