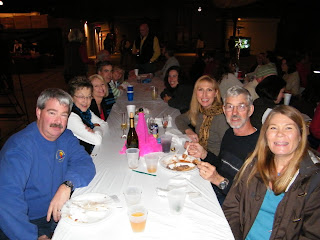 This year's annual party for the MORF club was held in the warehouse owned by one of our officers. It was the perfect venue for the party as it allowed mingling room. 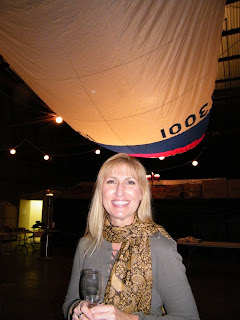 The warehouse was decorated with backlit sails hanging from the ceiling. It was very festive. 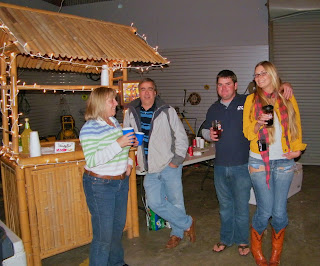 And what would any gathering of sailors be without the obligatory Tiki Bar? I think our board did a marvelous job of setting all of this up for us. 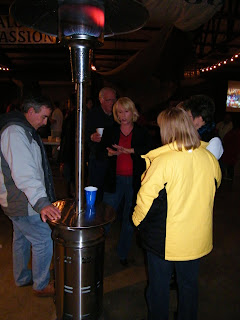 The evening was cold but the use of gas heaters made cozy pockets for gathering. The dinner was catered by Salinas Catering... mexican food. It was delicious and a crowd pleaser. Bruce and I sat with the BYC crowd this year. It's so much more fun now that we have a broader base of people with things in common. 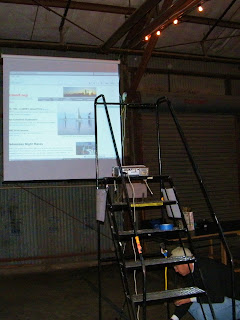 Steve presented this year's slide show... not as an event, but as a running loop of photos projected on a screen continually during the party. This was also an improvement over past years. Many of the pictures were mine. I'm turning into the unofficial official photographer for the group. This night was no exception. I took lots of pics at the party. 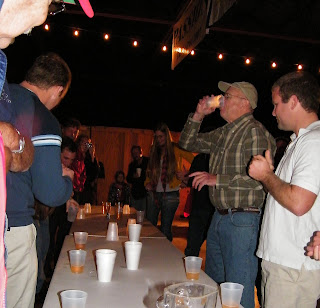 There was an organized drinking game which appealed to young and old. They pitted crew against crew for a game of "flip cup". You had to drink the beer then flip the cup until it landed upside down. I think some of these people had done this before. Not being a beer drinker myself, I didn't participate, but I think it was just as much fun to watch and cheer! 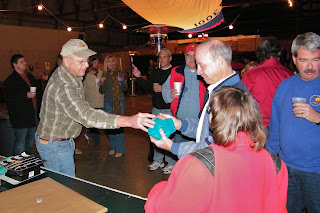 Also new this year, was a "White Elephant" gift exchange. I think some didn't get the memo about what that means... but many did. Bruce took a block that he wasn't using. A worthy boat offering. They gave out tickets to each person that brought a gift, then placed the matching ticket with the gifts. 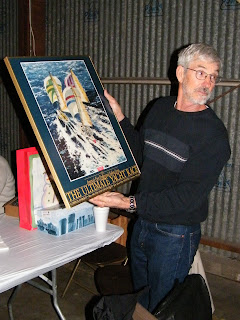 Bruce "won" a print from a 1988 sailboat race. I had no idea what to do with that thing. Luckily, he talked the BYC into letting him put it up on the wall at the club. Whew! That was close. I guess if worse came to worse... we could put it back in next year's gift exchange. 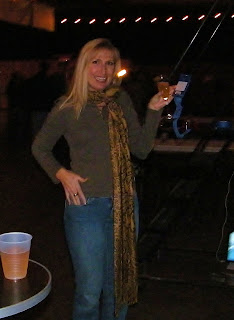 Not all raffle tickets were found wanting. I have had the uncanny luck of winning a gift card to West Marine every year. This year was no different, other than in the fact that I won TWO cards this year! I have GOT to start playing the Lottery! All of this luck can not be left untapped. 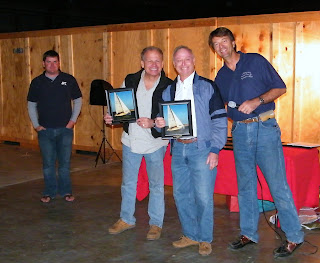 There were many awards given out. Each winner got a framed picture of his boat. Our BYC fellows took home a good portion of the awards bestowed. Hey, we may be "cruisers" but we are not to be ignored! 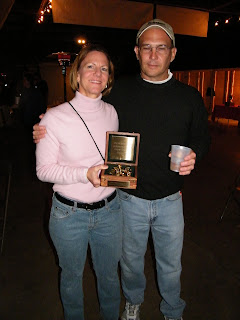 One of the highlights of the night's honors, was the recognition of Steve and Jacquie for all of their hard work this year. They have done a great job in facilitating change in the club. The club has suffered a long slow waning in membership and general momentum. This year there have been some definate changes and a new wind is blowing. I have good feelings about the coming year with MORF all due to the efforts of Steve and Jacquie. Congrats!

Bruce and I had a great time this year... not the same ole ho hum party! Thanks to the board and all who worked to make 2009 a great year!